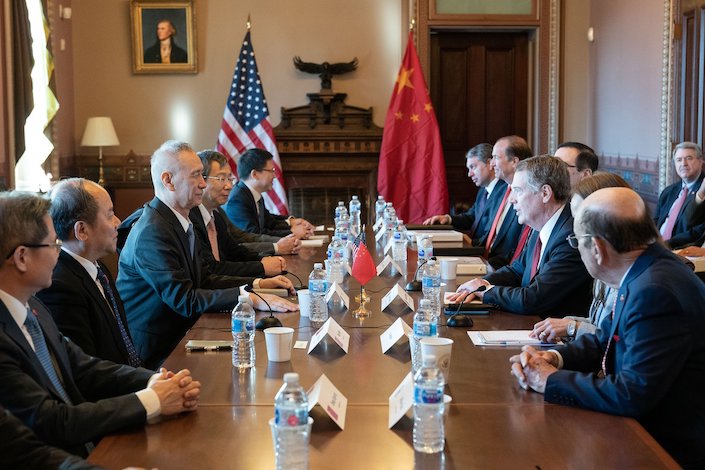 Officials from China and the United States wrapped up two days of high-level trade talks in Washington that the White House described as “intense and productive” but left further steps to achieve a deal.

“The two sides showed a helpful willingness to engage on all major issues, and the negotiating sessions featured productive and technical discussions on how to resolve our differences,” the White House said in a statement Thursday afternoon.

A report from China’s state-run Xinhua News Agency showed similar optimism. China agreed to cooperate with the U.S. on intellectual property protection and technology transfers, and purchase more agricultural, energy and manufacturing products and services from the U.S, it reported on Friday.

China and the U.S. have agreed to a “time schedule and route map” for future trade talks, Xinhua reported without nominating specific dates.

The negotiations, led by Chinese Vice Premier Liu He and U.S. Trade Representative Robert Lighthizer, were the highest-level meeting since U.S. President Donald Trump sat down with Chinese President Xi Jinping Dec. 1 in Argentina and declared a 90-day truce to negotiate an end to the trade war.

Trump met Liu in the Oval Office Thursday afternoon and received a letter from Xi. In the letter, Xi said he hoped both sides would be able to “meet each other halfway,” Trump told reporters.

As part of agreements reached during the talks, China will purchase 5 million metric tons of American soybeans over an unspecified time period, the White House said.

According to the White House statement, published after Trump’s meeting with Liu, much work remains to be done. Trump reiterated that the 90-day process set in Buenos Aires represents a hard deadline and that U.S. tariffs will increase without a satisfactory outcome.

In a statement released during Trump and Liu’s meeting in the Oval Office, Liu said, “We have achieved a lot of important consensus towards the direction of striking a comprehensive deal, which is to be ultimately reached between you and President Xi.”

The Trump administration has said that without a deal, tariffs would rise to 25% from 10% on $200 billion of Chinese goods starting at 12:01 a.m. March 2. The two countries have imposed punitive tariffs on more than half of each other’s imports since last summer.

Earlier Thursday, Trump signaled optimism on the latest trade talks but said any settlement won’t be final until he meets in person with Xi.

“Meetings are going well with good intent and spirit on both sides,” Trump wrote on Twitter Thursday morning.

“No final deal will be made until my friend President Xi, and I, meet in the near future to discuss and agree on some of the long standing and more difficult points.”

Trump told media Thursday that he plans to meet with Xi next month. He was quoted by U.S. media as saying that any agreement with Xi must go far beyond Chinese purchases of American goods and include opening of Chinese markets.

In a tweet, Trump said was looking for China to open its markets not only to financial services but also to manufacturing, farmers and other U.S. businesses and industries. “Without this a deal would be unacceptable!” he wrote.

Trump told reporters that he might be willing to accept a limited agreement by the March 1 deadline and extend the talks to get a more comprehensive deal.

“This isn’t going to be a small deal with China,” Trump said, according to The Wall Street Journal. “This is either going to be a big deal or it’s going to be a deal that we’ll just postpone for a while.”

The White House said the U.S. was particularly focused on reaching meaningful commitments on structural issues and deficit-reduction during the two-day talks.

“Both parties have agreed that any resolution will be fully enforceable,” according to the statement. “The United States looks forward to further talks with China on these vital topics.”

Officials from the two sides discussed a wide range of issues over the two days, including technology transfer, protection and enforcement of intellectual property rights, tariff and non-tariff barriers, cyber-theft, market barriers and the role of currencies, according to the statement.

The two sides also discussed the need to reduce the U.S. trade deficit with China. The purchase of products by China from American farmers, ranchers, manufacturers, and businesses is a critical part of the negotiations, the White House said.