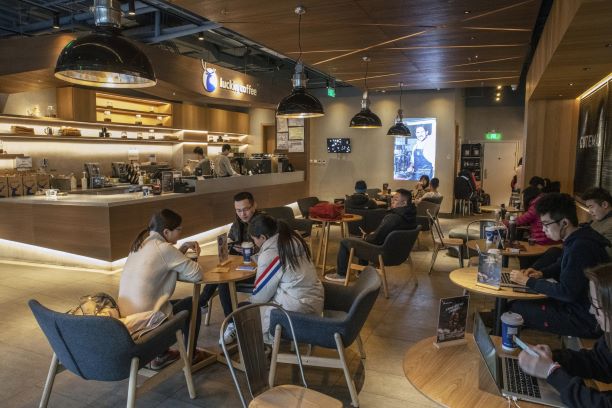 Luckin Coffee, the ambitious Chinese startup rolling out thousands of stores to take on Starbucks Corp., is beginning preparations for a U.S. initial public offering that could raise around $300 million, people with knowledge of the matter said.

The company is working with Credit Suisse Group AG on the deal, which could take place as soon as the second quarter, according to the people. Luckin could add additional banks at a later stage, the people said, asking not to be identified because the information is private.

Luckin is spending heavily to roll out 2,500 additional stores this year, after the company opened about 2,000 outlets in 2018, its first year of operation. It’s putting pressure on Starbucks, which has made China into its fastest-growing market and the second-biggest among the over 50 countries it operates in.

The Chinese firm is hoping its focus on convenience and affordability will lure urban office workers who don’t need the big plush spaces offered by Starbucks. It has also prioritized delivery and inked a partnership with internet giant Tencent Holdings Ltd.

Luckin has attracted funding from investors including Singapore sovereign wealth fund GIC Pte and was most recently valued at $2.2 billion. Plans for the IPO are at an early stage, and details of the transaction could change, the people said.

Representatives for Luckin and Credit Suisse declined to comment.