One-Third of Glaciers Under Threat in Key Himalaya Region: Report 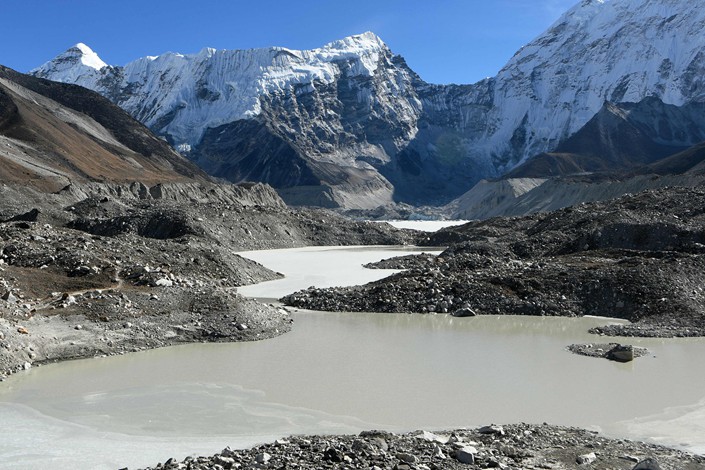 The Imja glacial lake in the Everest region of the Solukhumbu district, some 140 kilometers northeast of Kathmandu. Photo: VCG

At least one-third of the glaciers in the Hindu Kush Himalaya (HKH) region, which is spread across eight countries including China, will melt under rising temperatures caused by global warming even if climate change targets are met, a new report has found.

Glacier volumes in the region will decrease 64% by 2100 under current emissions levels. But even if the global temperature rise is limited to 1.5 degrees Celsius (2.7 degrees Fahrenheit) over that period, volumes will still decrease 36%, according to the report compiled by the Hindu Kush Himalayan Monitoring and Assessment Program at the International Center for Integrated Mountain Development (ICIMD).

“Actions at national, regional, and international scales are urgently needed to sustain this global asset, focusing on more investments and robust regional cooperation for sustaining mountain environments and livelihoods in the HKH and concerted action to keep global warming to less than 1.5˚C by 2100,” the report said.

The region covered in the report spans 4.2 million square kilometers (1.6 million square miles) in Afghanistan, Bangladesh, Bhutan, China, India, Myanmar, Nepal and Pakistan. It is the source of 10 major river basins that sustain livelihoods of 240 million people. Downstream, 1.65 billion people benefit directly and indirectly from its resources and more than 3 billion people benefit from food produced in its river basins, according to the report.

Glacial melt to such an extent – in a region already vulnerable to natural disasters due to its high seismicity, steep terrain and fragile geological formations – will increase the likelihood and frequency of major natural disasters. Shifting monsoon patterns caused by climate change may also cause intense precipitation that will increase instances of floods, landslides, and soil erosion.

The ICIMD report also pointed to air pollution as a major threat that will amplify effects of greenhouse gases, such as carbon dioxide and methane, and accelerate melting of the cryosphere, or the parts of the earth where water is frozen in the form of glaciers, icebergs, and snow. Regional warming disturbs monsoon patterns in the Himalayan cryosphere, and “the resulting shifts in rainfall dynamics could have critical socio-economic as well as environmental implications,” the report said.

The report was compiled by 210 authors with input from more than 350 researchers in 22 countries over five years. It also analyzes how global warming in the HKH region will disproportionately affect women, indigenous populations, and the impoverished populations living in the remote areas of the mountainous region.

The report also pointed to obstacles to maintaining livelihoods and prosperity in the HKH region. Experts consulted for the study said that regional cooperation on resource sharing must be improved. There are also critical gaps in research, such as monitoring snowfall and glacier volume change and a lack of long-term, detailed hydrological studies on different climate zones and elevations.

The region is also one of the most ecologically diverse ecosystems in the world. Between 1998 and 2008, an average of 35 new species were discovered per year in the eastern Himalaya region alone. It is unclear how global warming and climate change will affect the ecosystems in the HKH region.