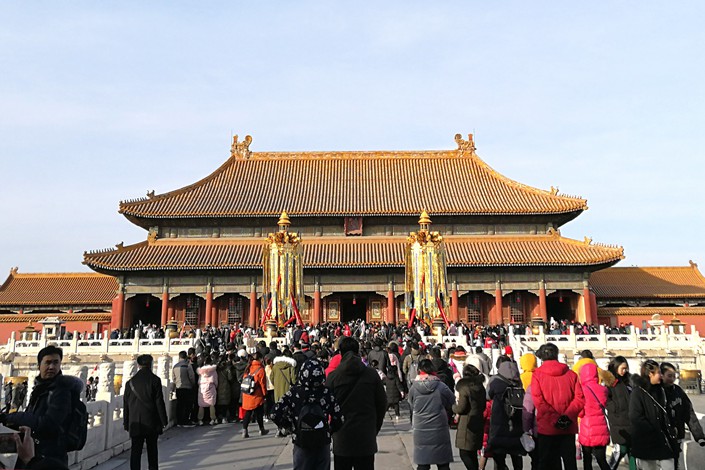 Just as waistlines grow as families gather to celebrate the Lunar New Year, traditional expansion occurs in the amount that Chinese spend on food, gifts and goods. Yet while such spending rose 8.5% as China welcomed the Year of the Pig last week, it was the slowest rate of growth since at least 2011, reflecting wider troubles in China’s economy.

For the first time lunar new year spending broke the trillion yuan barrier, with 1.01 trillion yuan ($149 billion) being spent during the Lunar New Year celebration, which ran from Feb. 4 to Feb. 10 this year, according to the Ministry of Commerce (link in Chinese). The ministry said growth was “steady and rapid,” without acknowledging the slowing growth rate.

A slowdown was also apparent in tourism statistics. Chinese citizens took 415 million trips over the period, an increase of 7.6% from the previous year, according to the official Xinhua News Agency (link in Chinese). It marks the slowest rate of growth since 2008, when the Chinese economy was feeling the shockwaves of the global financial crisis.

The festival consumption slowdown reflects the wider deceleration in China’s economy, which recorded its slowest growth in 28 years last year, as the government tries to rein in inefficient spending without spooking companies and investors.

But it may also spell an even leaner year ahead for sales, analysts said. Retail sales growth was down 2.3 percentage points year-on-year to 8.5% during the holidays, Nomura bank said in a note. Lunar retail consumption is “a good barometer of private consumption for the year,” and the data “does not bode well for overall retail sales growth,” it added.

While domestic travel rose slowly, the state-run China Economic Net said that outbound travel bookings rose by 32% year-on-year, despite prices increasing by almost 10%. Outbound travelers were also more adventurous in their choice of destinations, with travel platform CTrip saying that it received bookings for 97 regions this year, up from 82 the year before.

It also appears to have been a good year for China’s dominant messaging app WeChat, which said that the number of messages sent on the Lunar New Year’s Eve and Lunar New Year’s Day rose 64.2%. It noted that 823 million people sent and received WeChat “hongbao” or red envelopes, a digital take on the Chinese tradition of gifting relatives with envelopes of cash during the festive period.

The Lunar New Year’s day also broke previous records at the box office, with 1.44 billion yuan taken, largely as moviegoers piled in to see the comedy “Crazy Alien” and the big-budget sci-fi flick “The Wandering Earth.”