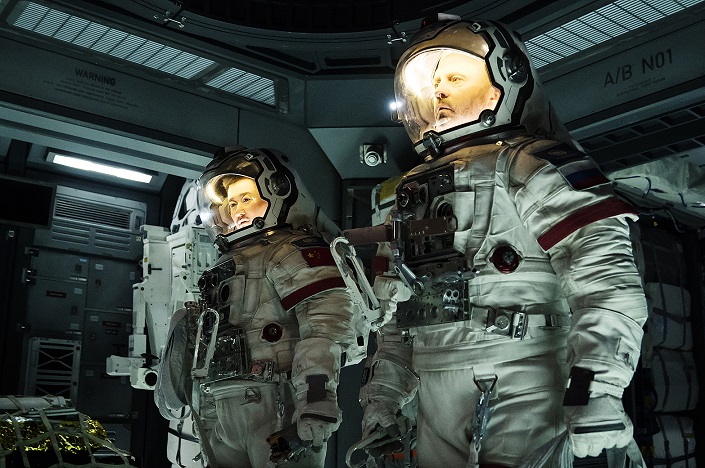 A still from The Wandering Earth. Photo：VCG

China has once again broken its single-day box office record on the first day of the Lunar New Year, a lucrative time for the country’s film industry as Chinese people flock to cinemas during a week-long public holiday.

Chinese cinemas kicked off the Year of the Pig with record-setting box office receipts of nearly 1.44 billion yuan ($213 million) on Tuesday, the first day of the new year, beating last year’s one-day milestone of 1.27 billion yuan, which was also set on the first day of lunar new year, according to data from industry tracker and ticketing platform Maoyan.

Much of the takings came from eight films released on Tuesday — all of which received Chinese investment — including comedy "Crazy Alien" and the big-budget sci-fi movie "The Wandering Earth."

"Crazy Alien" topped the list with a total of 405 million yuan of ticket sales on the first day, accounting for 28% of receipts on the day, Maoyan data showed. "The Wandering Earth," which took four years and cost $50 million to make, came in fourth and pocketed 187 million yuan on the same day.

"The Wandering Earth" has also been met with high expectations online that the film would establish a new era in Chinese filmmaking, according to the New York Times. The film quickly saw skyrocketing box office revenue, ranking first on Maoyan’s list on Thursday afternoon.

China’s box office performance during the holiday, also known as the Spring Festival, is widely regarded as an indicator for the coming year’s performance. In 2018, the country’s yearly box office receipts hit a record 61 billion yuan, with domestic productions making up almost two-thirds of the total revenue.

Lunar New Year takings also pushed China’s box office revenue ahead of North America’s in the first quarter of 2018, but the momentum did not last. North America’s box offices raked in total receipts of $11.8 billion in 2018, compared with China’s $9 billion, according to a report by industry data tracker EntGroup Inc. and advertising company Focus Film.

In a bid to shore up the country’s own film industry, China has implemented a screen quota system for foreign films and currently only grants 34 foreign titles access to the Chinese market each year. However, signs have pointed to China quietly loosening the restriction to boost box office figures.