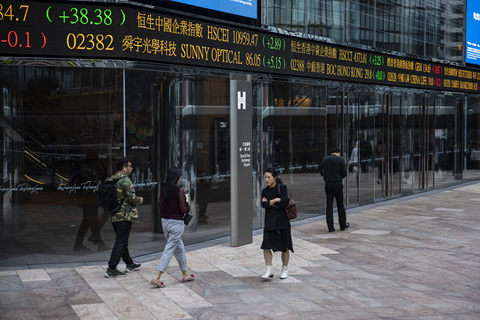 (Hong Kong) — A Suzhou-based biotech company scaled back its fundraising target by 23% as it moves to become the first pre-profit pharmaceutical startup to list in Hong Kong this year.

In April last year, Hong Kong instituted new rules allowing biotech firms to list on the city’s exchange even if they had yet to make a profit. Five mainland startups have debuted in Hong Kong since then, including Innovent Biologics Inc., raising HK$3.2 billion, and Shanghai Junshi Biological Medicine Technology Co., HK$3.1 billion.

However, some of the companies have suffered sharp drops in their stock prices since listing, as roughly 72% of the newly listed stocks in Hong Kong fell below their IPO prices last year.

According to the prospectus, CStone Pharmaceuticals will offer 186 million shares at a price between HK$11.10 and HK$12.80. The company is set to announce the pricing Feb. 20 and make its debut a week later.

Established in 2016, CStone Pharmaceuticals raised US$412 million in previous funding rounds to support its research on innovative immuno-oncology and molecularly targeted drugs for cancer. The company has 14 drugs under development. They belong to a class of treatments known as PD-1 inhibitors, which work by reversing a cancer’s suppression of a patient’s immune system and thus help the immune system target cancer cells.

CStone Pharmaceuticals said in the prospectus that it will use 30% of the IPO funds to develop its key drug candidates and 40% for clinical trials. The remaining money will be invested in new drug research and business operations.

Four cornerstone investors have agreed to acquire HK$740 million of shares in CStone Pharmaceuticals’ offering, or 30% of the total share sales, according to the prospectus. Investors include Singapore’s GIC, Chinese private equity fund Boyu Capital Advisory Co., Ishana Capital and Indus Funds. Goldman Sachs and Morgan Stanley are joint sponsors of the IPO.

In the first nine months of 2018, CStone Pharmaceuticals booked HK$1.16 billion of net loss, compared with a HK$343 million loss for all of 2017, according to the prospectus.

The widening loss reflected the company’s expanding research spending. In the first nine months of 2018, CStone Pharmaceuticals invested HK$699 million in research and development, an increase of more than 300% over the same period a year ago.