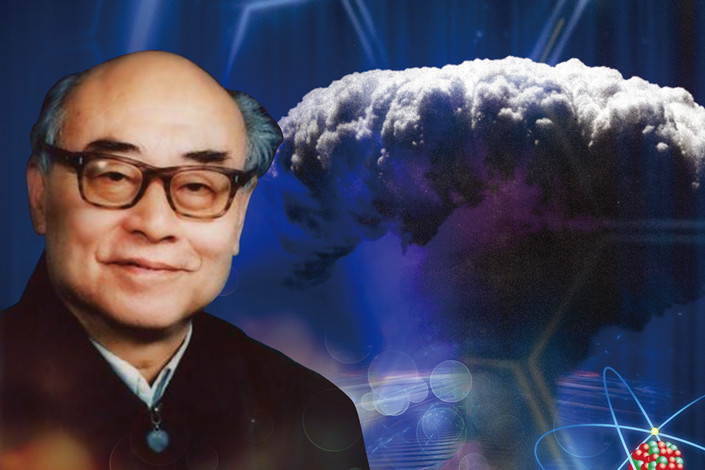 Yu Min was born in Ninghe, now part of Tianjin, in 1926. While attending Peking University in the 1940s, he developed an interest in quantum theory and was determined to engage in research on the fundamental theorem of physics. In 1951, he graduated from the Institute of Modern Physics at the Chinese Academy of Sciences and worked in nuclear theory research. His “Lectures on Nuclear Theory,” published in coordination with Yang Liming, became China’s first specialized text on nuclear theory and a formal textbook for university courses on the subject. Qian Sanqiang, known as the father of China’s nuclear program, once commented that Yu’s work “filled in the blanks of our nuclear theory.”

In 1961, Qian invited Yu to participate in preliminary studies of hydrogen bomb theory. By that time, Yu had already made significant achievements in the theoretical research of nuclear theory, so joining the preliminary group to study hydrogen bomb theory was a significant move. Yu later said that he was not interested in the study of applied technology and he preferred theoretical work, but at the time he didn’t have a choice: “The Chinese nation did not bully others, nor should it be bullied by others. Nuclear weapons are a means of protection. This national sentiment was my spiritual motivation.”

Because of international scientific and technological blockades and embargoes imposed on China, the development of the hydrogen bomb was entirely reliant on domestic scientists working from scratch. The hydrogen bomb is more complex than the atomic bomb in its principles and theory. The scientists knew that the energy release of the hydrogen bomb was much greater than its atomic weight, but it was unclear how to achieve thermonuclear stability and achieve any theoretical breakthroughs. With more than 30 young researchers, Yu worked day and night on hydrogen bomb theory, using a slide rule, a blackboard and a simple 104-type electronic tube computer as their main calculating tools. The A4 paper tape produced by the computer could be stacked from floor to ceiling. Yu’s son said that for a long time, he rarely saw his father at home. When they did meet occasionally, his father’s face always had a thoughtful or puzzled expression.

Over four years, Yu and his team broke through one barrier after another, finally forming a hydrogen bomb theory scheme that could be a basic configuration. On Dec. 28, 1966, the theoretical test was carried out: the test data were the same as the theoretical prediction, indicating that the technology had been mastered. On June 17, 1967, China’s first hydrogen bomb test was a success.

According to one of his colleagues, He Zouxiu, Yu’s role in the course of the preliminary studies was both soccer coach and striker — he not only led the team but also scored goals at key moments. “Yu Min’s work laid all the foundations for the hydrogen bomb theory, including the development of the miniaturization of nuclear weapons, all based on his research into theoretical foundations,” He said.

While many have said Yu is the inventor of China’s hydrogen bomb, even calling him “the father of the hydrogen bomb,” Yu has always said that such accolades are not appropriate for science. The hydrogen bomb was a collective contribution, he said. He merely “did some useful work.”

Because of the top-secret nature of nuclear research, Yu remained anonymous for more than 30 years until 1998, when files were declassified. In 1999, he was awarded the “Two Bombs and One Satellite Merit Award” along with 22 other scientists for their contribution to China’s nuclear and space programs. In 2015, he won an honorary certificate of the highest national science and technology award.

On Dec. 18, Yu Min ranked first among 100 “reform pioneers” honored at the commemoration ceremony for the 40th anniversary of China’s reform and opening policy.