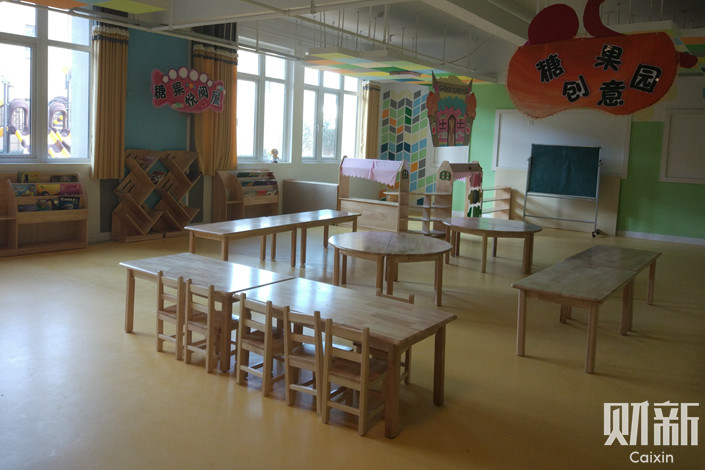 Students and teachers at private kindergartens have found themselves locked out of classrooms in eastern China amid confusion over new nationwide kindergarten reforms. Local authorities have pledged to investigate the matter.

Until recently, Sheng Minghui (not his real name), ran a private kindergarten in Rongyao New Town Community in Xuzhou, Jiangsu province. On Jan. 21, he was suddenly notified by the county’s education bureau that the kindergarten premises would be taken over by the state. That day, property managers from the kindergarten’s residential compound arrived to change the locks.

Now, students back from the weeklong Lunar New Year holiday have been unable to return to school. One parent told Caixin that Rongyao New Town Kindergarten had refunded the semester’s tuition fee of 2,360 yuan ($349). But she was still left struggling to find another kindergarten for her son. “At this time (of the year), other schools will already be full, and it won’t be easy to do a transfer,” she said.

Rongyao New Town Kindergarten’s abrupt closure follows widespread confusion over a policy document issued by China’s Ministry of Education last month aimed at standardizing the country’s kindergartens, many of which have long been poorly regulated and operated under complicated ownership structures.

In late January, reports began circulating that the Ministry of Education was starting a broad crackdown on privately run kindergartens. The ministry later clarified (link in Chinese) that its policy had been misinterpreted, and the new rule only affected for-profit private kindergartens operated as residential communities’ “allocated kindergartens.”

Many of China’s residential communities are laid out in a way that allocates space for public facilities, including kindergartens. The new policy allows state-run and not-for-profit private kindergartens — those following an “inclusive” model with low fees and meeting certain government standards — to use the facilities, the ministry said. But for-profit kindergartens must not operate in them.

Following media reports about the kindergarten closures, the county education bureau issued a statement late Thursday saying it received a local government order to investigate the matter. The bureau said it will follow related policies issued by the State Council and local government to examine and rectify local kindergarten operations.

The education bureau, however, said the Rongyao New Town Kindergarten has yet to finish required registration with local authorities and is deemed an illegal operation that will face further investigation.

The Ministry of Education’s new policy will be difficult to implement due to the complicated situation in many residential communities, according to Yu Su, a partner at Beijing-based Jun He Law Offices. In some communities, local governments have auctioned off the right to operate kindergartens while retaining property rights for the premises. In others, the property rights are held by the community’s property developers, or even by the kindergarten operators, making the process of taking over facilities contentious, Yu told Caixin.

Sheng said he had signed a 20-year contract to lease the kindergarten premises from Rongyao New Town’s community property management company in 2017. He said he had begun running the kindergarten as an “inclusive” facility around the end of 2018 by lowering tuition fees.

But Sheng did not have the relevant qualifications to operate a kindergarten, according to a termination notice issued by the community’s property management company on Jan. 26. Sheng said he had applied for a license in October, but was still waiting for approval from education authorities.

This story was updated with response from the local education bureau.