Environmental Crime Arrests Jumped By Half in 2018 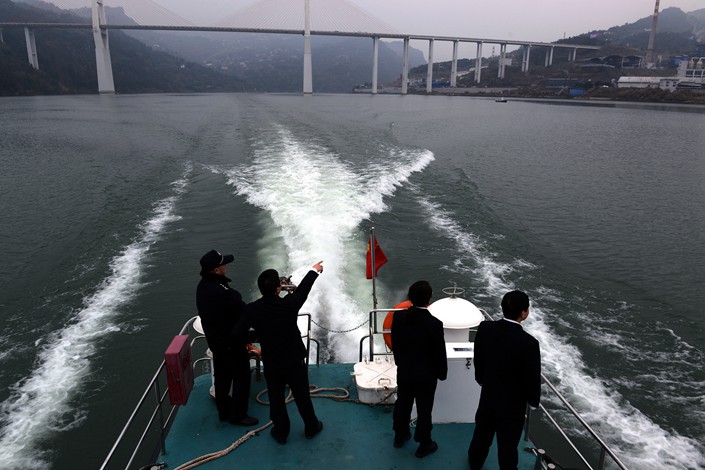 Pollution inspectors from Yunyang County Procuratorate search for signs of pollution in a Yangtze River tributary on Jan 16, 2019. Photo: VCG

China arrested more than 15,000 people for environmental crimes in 2018, an increase of 51.5% from 2017, as it steps up efforts to enforce environmental compliance, the country’s top prosecuting body said Thursday.

A stepped-up war on pollution has seen China take measures to improve environmental protection and crack down on practices that previously flew under the radar. Last year, President Xi Jinping announced the nation will push for greater coordination between “ecological civilization” and economic and social development.

“Those who come to pollute the whole environment or the whole river, especially for the sake of pursuing personal interests, should be severely punished and strictly investigated for legal responsibility,” said Zhang Xueqiao, the deputy chief procurator of the Supreme People’s Procuratorate (SPP).

Zhang Zhijie, a senior prosecutor at the SPP, said half of all environmental and resource protection cases involve deforestation and the illegal occupation of agricultural land. Prosecutions rose 21% in 2018.

One of the major issues with China’s battle to control pollution is lax governance. Companies that are hired for environmental monitoring frequently falsify data or take bribes in exchange for a passing grade. In more serious cases, companies’ failure to control pollutants and governmental failure to enforce regulations has led to deadly explosions and the poisoning of water and soil.

China’s Ministry of Environment and Ecology has launched multiple rounds of inspections of provincial and local governments over the past two years, including “second look” investigations to check on the progress of rectification of violations. In December, the ministry announced that 917 people would be punished for failing to implement regulations.

“The problems found during the inspections, including the typical cases we have published, are mostly due to the inadequate performance of local governments,” said Bie Tao, director of the MEE’s Department of Regulations and Standards.

The officials stressed that the SPP had been working closely with the MEE and local environmental protection bureaus and public security bureaus to protect and restore damaged areas.

Officials said that more than 1,400 square kilometers (540 square miles) of damaged land were recovered through public litigation last year. Procuratorial organs have urged the closure and control of 4,015 enterprises that illegally discharged exhaust gas and other pollutants.