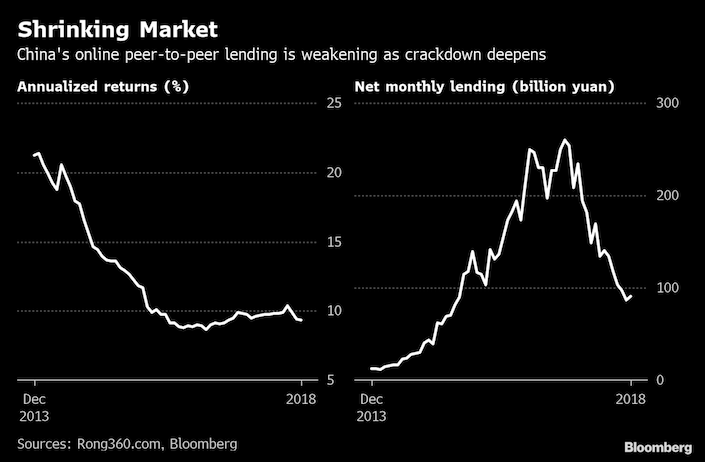 Chinese police have frozen about 10 billion yuan ($1.5 billion) of assets across more than 380 peer-to-peer lenders in an escalated investigation into illicit financing.

Codenamed ‘Fox Hunt,’ the operation spanned 16 countries and regions including Thailand and Cambodia and led to the arrests of 62 suspects implicated in Chinese P2P frauds since June, China’s Ministry of Public Security said in a statement on Sunday. It didn’t disclose more details but said police is still recouping losses.

While a lack of oversight contributed to a ballooning in P2P loans, the sector has come in for special scrutiny under President Xi Jinping’s crackdown on financial risk. Authorities are now dramatically shrinking the market, which spawned the nation’s biggest Ponzi scheme, protests in major cities, and life-altering losses for thousands of savers.

Some P2P companies are attracting investors by promising high interest rates under the guise of “financial innovation,” while others fabricated investment projects and squandered the money, the police said. At least 100 people have dropped out of contact or disappeared before the firms went bust, with some having fled overseas, according to the statement.

The number of Chinese peer-to-peer lenders may drop by 70 percent this year to as few as 300, according to an estimate from Shanghai-based Yingcan Group. Only some 50 firms will survive eventually, Citigroup Inc. predicts.