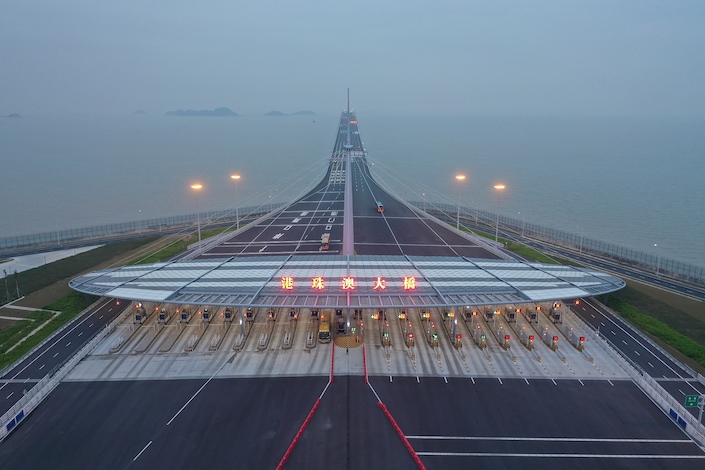 The 55-kilometer Hong Kong-Zhuhai-Macau Bridge that was opened in October. Photo: VCG

(Hong Kong) — China revealed a detailed roadmap for the development of the Greater Bay Area around the Pearl River Delta, setting the stage to test several significant financial reforms in the region.

The State Council, the cabinet, late Monday issued guidelines for the ambitious plan to transform the Pearl River Delta into a world-class city cluster to rival famous bay areas in Tokyo, New York and San Francisco.

The so-called Greater Bay Area consists of nine cities in Guangdong province along with Hong Kong and Macau — the special administrative regions that were colonies of Britain and Portugal until two decades ago. The area is home to 68 million people. It accounts for less than 1% of China’s territory and 4% of its population but generates nearly 10% of national gross domestic product, or $1.58 trillion in 2017, about the same as South Korea or Russia.

The guidelines set out a timetable for the development of the Greater Bay Area and outline reform measures to be tested there. The goal is to turn the Greater Bay Area into a global technology innovation center and finance powerhouse with advanced manufacturing and modern services industries, according to the cabinet document.

The guidelines set forth measures to improve the connectivity of financial services in the region, with an emphasis on expanding cross-border transactions using the yuan to reduce the inconvenience of exchanging three currencies used in the region. Measures are also set to enhance links among financial products and investment channels within the region.

Companies in the Greater Bay Area will be allowed to issue yuan-denominated bonds within the area. The guidelines will also encourage insurance companies in Hong Kong and Macau to offer yuan-denominated reinsurance products and set up branches in the Qianhai, Nansha and Hengqing free trade zones in the region.

The guidelines highlight the importance of Hong Kong as an international financial hub and a key offshore center for the yuan. Hong Kong investors will be supported in raising yuan-denominated funds to invest in the city’s capital market, according to the guidelines.

Hong Kong investors will also be encouraged to invest in private equity and venture capital funds in the region and to develop risk-hedging tools for cross-border transactions.

Huen Wai-yi, chairwoman of the Hong Kong Association of Banks, said the proposals will benefit Hong Kong’s financial sector. The association has set up a special working team to explore business coordination with other cities in the region under the development plan, according to Huen.

The guidelines also pledge to support Macau in becoming an international financial service center and yuan settlement hub to serve the Portuguese-speaking population. It also proposes a plan for creating a yuan-settlement system in Macau’s securities market.

Projects to improve physical interconnections in the region to support economic integration have been underway for years. The iconic project is the 55-kilometer (34-mile) Hong Kong-Zhuhai-Macau Bridge, the world’s longest road bridge, which was opened in October. The new bridge halved the travel time between Hong Kong and Zhuhai.

According to the plan, the framework to build the Greater Bay Area into a world-class city cluster should be formed by 2022 with deepening coordination and integration in the region.

By 2035, the markets within the Greater Bay Area should be highly connected, with very effective and efficient flow of various resources and factors of production, the guidelines say.

A previous version of this story gave the incorrect location of the nine Chinese mainland cities in the Greater Bay Area. They are in Guangdong province.