By Wallace Yu and Bradley Hiller 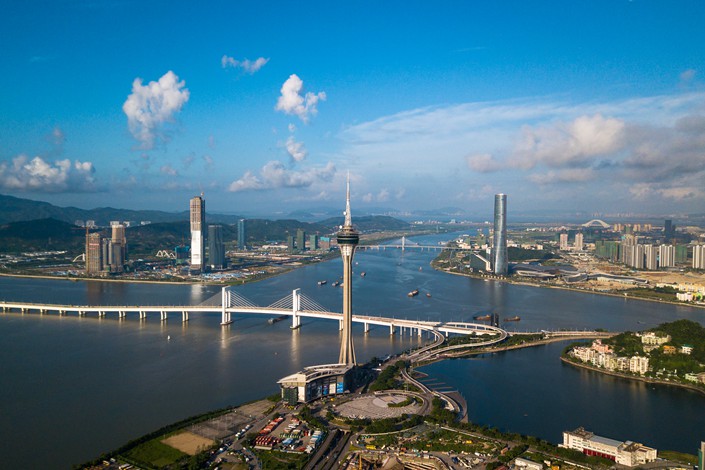 Such findings may be cause for public concern, given that it is their monies — via taxes and other public revenue raising avenues — which ultimately fund many infrastructure investments. Such concern may be particularly high when the scale and diversity of infrastructure necessitates large financial commitments over multiple decades, as is the case for the much-anticipated Guangdong-Hong Kong-Macao Bay Area (GBA) project.

The GBA is a priority regional initiative clustered around Hong Kong, Macao and nine cities in Guangdong province. The cluster already contributes 12% of China’s GDP and aims to rival major global innovation hubs, such as the San Francisco Bay Area. The GBA’s 2017 framework agreement can be commended for embedding principles of innovation, globalization and sustainability — an evolutionary approach for “special economic zones” in China. With regard to financing however, the agreement does not explicitly contain compatibly progressive mechanisms and instead seems to follow conventional wisdom, which places fiscal responsibility on individual member municipal governments.

Given the unpredictability of future macroeconomic conditions, and to help secure world-leading innovation and sustainability practices, we argue that creating capacity for private capital to complement public capital for infrastructure investment could provide critical support to the GBA’s ambitious objectives. More specifically, we believe that public-private partnerships (PPPs) could help de-risk the GBA’s infrastructure investment future.

PPPs involve public- and private-sector entity collaborations, where partners jointly plan and execute activities with an aim to achieve agreed objectives, while sharing any incurred costs, risks, and benefits. PPPs draw on the efficiency, flexibility, and capability of the private sector and the accountability, long-term perspective, and social goods interests of the public sector. While President Xi stated in 2017 that "China will let the market play a decisive role in resource allocation in the economy," engagement in PPPs remains nascent.

In addition to the potential economic benefits of PPPs, social (including governance) and environmental outcomes may also be enhanced for the GBA.

To match investors with investments of acceptable project scale, risk and return period, the GBA could explore collaborations with:

*Pension funds — Favorable market conditions, savings gaps and a regulatory focus on asset-liability management are increasing interest in real assets. Using the example of the Guangdong local authority pension fund (which transferred assets to the National Social Security Fund for centralized professional fund management), mandates could be introduced to permit investment of social security proceeds in regional infrastructure and to broaden the scope of investible asset classes.

*Foreign investors — Sovereign wealth funds, multilateral development banks and other government-backed funds (such as Hong Kong's own Future Fund) may find GBA infrastructure investment financing attractive. For example, the $280 billion Canada Pension Plan Investment Board (CPPIB) aims to more than double emerging market assets (in countries such as China) and across many GBA asset types.

Curiously, despite the generally low status of PPPs in China today, provinces with weaker fiscal positions have the greatest PPP deal participation. Hence, enhanced PPP publicity could benefit those poorer provinces and municipalities.

With regard to governance, a shift away from implicit guarantees for local governments and state-owned enterprises could transition them towards greater transparency and accountability. Additionally, the strong institutional and legal systems in Hong Kong and Macau, coupled with their international private sector experience, could help delineate the role of public and private stakeholders in joint infrastructure provision. Such collaborations could enhance government access to technology, data and industry best-practices. For example, the CIB (in Canada) uses data analytics to inform infrastructure policies and promote evidence-based dialogue between government stakeholders.

Wallace Yu is Portfolio Manager and Director at China Investment Corporation, and committee member of Beijing Youth Federation. He is lead author of the book “Exploring the Frontier in Asset Management” (CITIC Publishing 2018).

Dr Bradley Hiller consults on sustainable development to the World Bank and Asian Development Bank and is a Visiting Fellow at the Global Sustainability Institute, UK.

Both were 2018 AsiaGlobal Fellows at the University of Hong Kong.