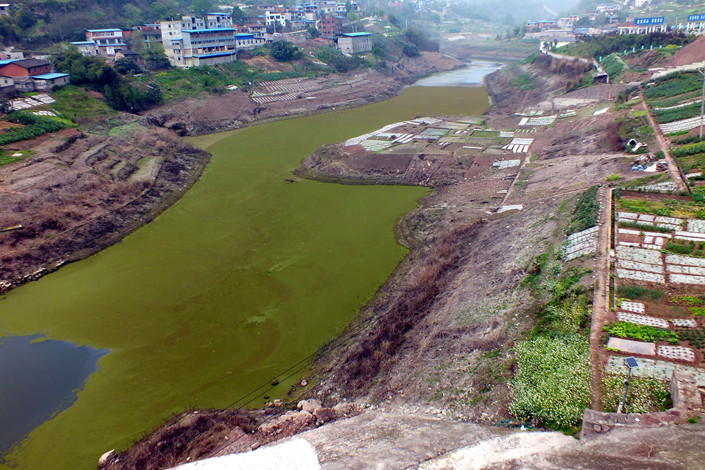 Pollution from the spillway of the Wanzhou District Shenmingba Sewage Treatment Plant in Chongqing flows into a tributary of the Yangtze River on March 18, 2013. Photo: VCG

China’s central government is once again stepping up its efforts to curb pollution, dumping, hazardous waste, and sewage in the Yangtze River with multiple cross-ministry announcements.

Last week, the MEE announced a special project to inspect and map all sewage outlets and identify those that are unregistered. Water quality will be measured at all outlets and any pollution found will be traced back to its source.

Also this week, the Ministry of Transport, the MEE and the Ministry of Housing and Urban-Rural Development issued new guidelines for managing pollution from ships along the river, requiring local governments to establish an inter-departmental inland river supervision mechanism.

Ships often discharge pollutants, but many that are transporting hazardous or other kinds of solid waste dump the pollutants into the river. Due to the size of the river and a lack of patrol vessels, the Yangtze is difficult to police at night, limiting the supervisors’ ability to inspect its use. Additionally, transport and environmental departments have different definitions of what kinds of waste are dangerous, making it difficult to cooperate across departments.

The new guidelines from the three ministries propose that relevant transportation, environmental, sanitation, urban drainage departments should, under the leadership of the local government, establish and implement a joint supervision system for the safe transfer and disposal of pollutants from ships and establish a joint law enforcement mechanism to combat the illegal transfer and dumping of hazardous waste.

Illegal pollution of the Yangtze is extremely common. Ships transporting hazardous and other solid waste often dump pollutants into the river. Supervisors are not able to inspect frequently enough, and different governmental departments sometimes have different understandings of what “dangerous goods” are, making coordination difficult.

In the last six months, there have been multiple cases of illegal dumping. In December, nine people were sentenced to between one and six years in prison and fined 50,000 yuan ($7,400) to 60,000 yuan for dumping toxic garbage into the Yangtze. This week, a vice-chairman of Nantong Tendenci Chemical Co. Ltd. in Jiangsu province was sentenced to four years in jail and fined 150,000 yuan for discharging wastewater contaminated with pesticides directly into the river. The company was fined 14 million yuan.

The guidelines issued by the three ministries state that transport departments managing ports should inform relevant personnel in maritime affairs, environmental protection, sanitation and urban sewage departments where the loading and unloading of hazardous chemicals takes place. The environmental bureaus should regularly notify transport and maritime departments about pollutants that should be managed by environmental personnel.

The guidelines pointed out that the locations of dangerous cargo loading and unloading terminals, pollutant management facilities and pollutant receiving units in port areas should be made public.

Last November, multiple ministries and governments from cities in 15 provinces signed a declaration that they would rehabilitate the Yangtze’s ecosystems.

Over 40% of the country’s wastewater is discharged into the river, resulting in concentrations of toxic substances like sulfur dioxide that are nearly double the national average, according to data cited by Hu Xiaoguang, a member of the Chinese People’s Political Consultative Conference, at a meeting of the national advisory body in March. The Yangtze accounts for 55% of the 2.75 million tons of plastic deposited into the ocean by the world’s rivers each year, according to a report in the Environmental Science & Technology journal published last year.