What Killed the Yangtze River? 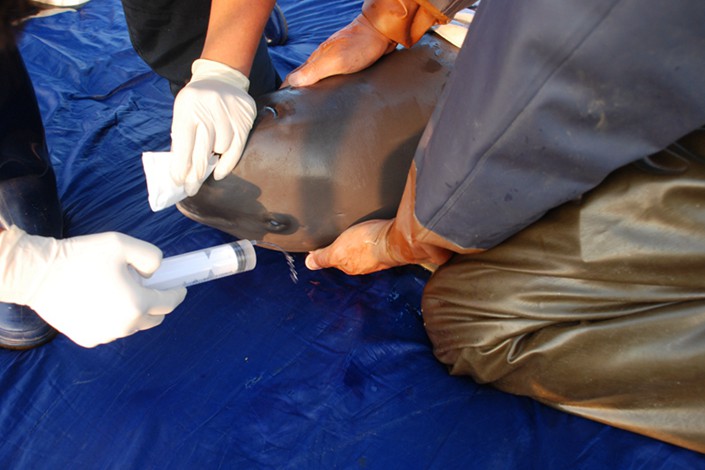 The Yangtze River, Asia’s longest river, has been central to China’s economy and ecosystems for millennia. Stretching from the edge of the Tibet autonomous region to Shanghai on the country’s eastern coast, its meandering waters are fed by over a fifth of China’s land area.

For a long time, it was the source of much of China’s aquatic biodiversity, teeming with over 4,000 species and producing over 40% of the world’s freshwater fish supply.

But now, thanks to decades of pollution and encroaching human development, the Yangtze and its many tributaries have been depleted of life.

Scientists studying the river’s fish populations have given it the worst possible score — “no fish” — on the Index of Biological Integrity, a measure first developed by U.S. scientist James Karr in the 1980s to measure the effects of pollution on bodies of water, President Xi Jinping said in a speech in April.

“This doesn’t mean that there are literally no fish in the river, but there are far fewer in the Yangtze compared with other rivers,” Wang Hongzhu, an aquatic life researcher at the Chinese Academy of Sciences, told Caixin. But some tributaries that have been cut off from the main river by hydroelectric dams are, in fact, totally devoid of fish, Wang said.

Nearly a third of all fish species in the Yangtze are now endangered, Wang said. In the 1950s, the river was able to produce 430,000 tons of catch for fisheries each year, but that volume has now fallen by over three-quarters.

Fish haven’t been the only casualties. The baiji, a species of dolphin nicknamed the “goddess of the Yangtze River,” was one of the victims of the river’s transformation. Declared functionally extinct a decade ago, baiji had lived in the river for at least 20 million years. Industrialization decimated the healthy population that existed in the 1950s in less than a human lifetime, according to U.K.-based wildlife charity Whale and Dolphin Conservation.

The tragedy of the baiji

According to local legend, in ancient times, there was a beautiful young woman who jumped into the Yangtze to escape the advances of a lecherous man — her stepfather, or a wealthy landowner, depending on the version of the myth. In the water, the woman turned into a river goddess in the shape of a graceful dolphin with a long snout and a distinctive white belly — the baiji. The man, who later drowned in a storm, turned into the stubby-nosed and dark finless porpoise, nicknamed “river pig” by locals.

The two dolphin species were once commonly sighted along the Yangtze, and fossils suggest that the baiji has existed for over 25 million years, and lived in the river for 20 million. But by the time Chinese researchers began paying closer attention to them in the 1970s, the population of baiji had shrunk to only 400 individuals from around 6,000 just two decades earlier.

While baiji were occasionally eaten by local residents, many more died as bycatch thanks to industrial-scale fishing in the Yangtze. Shrinking fish populations and heavy pollution also trimmed their numbers.

Alarmed, conservationists attempted to save the baiji, trying a variety of methods that included artificial breeding and the creation of designated conservation areas. But it was already too late for the “goddess of the Yangtze.”

In the winter of 1995, Gao Daobin, a researcher at the Chinese Academy of Sciences, paddled through the stretch of the Yangtze that runs through Hubei province, accompanied by a few dozen local fishermen, in search of baiji.

“We waited for a month and didn’t see anything,” Gao told Caixin. Then on the last day of the expedition, two porpoises appeared. The expedition team caught one baiji, a female. The plan was to move her into the Tian’ezhou ox-bow lake in Hubei, which theoretically contained enough fish to sustain a small, protected population of baiji.

But 168 days later, Gao’s baiji was found dead, a fishing net wrapped around its slender snout. The baiji had attempted to escape the lake during a summertime flood that reconnected Tian’ezhou Lake with the Yangtze. When the baiji was dissected, researchers discovered that it had died with no food in its stomach.

To Gao, the baiji’s empty belly showed that “it had been very isolated, and very lonely, having lost all its companions. It was depressed, the way people are, and had no appetite.”

All other efforts to artificially revive the baiji population failed. In 2002, Qiqi, the last known baiji, died of old age while in the care of the Chinese Academy of Sciences.

There have been no confirmed sightings of the baiji since. In 2006, an international group of porpoise experts traveled down the Yangtze in search of the baiji, and found none. Eventually, researchers declared the species “functionally extinct,” meaning that so few individuals remain that there is no hope for the baiji’s long-term survival.

Baiji had split off the evolutionary tree from other cetaceans millions of years ago, making them an extreme rarity. With the baiji’s extinction, there was “nothing like it left in the world,” British researcher Samuel Turvey wrote in his book recounting the 2006 Yangtze expedition.

What killed the Yangtze River?

Like many of the world’s major waterways, the Yangtze is trapped in a tug of war between economic interests and conservation. The economic belt running along the river is home to around 40% of the country’s population, and humans have used it for many things, including hydroelectric power, large-scale shipping and waste disposal.

Many parts of the Yangtze and its tributaries have been straightened, deepened or otherwise altered to make shipping more convenient. But this has made life harder for the organisms that live in it.

“The river’s original meandering form ensured a diversity of habitats, some of which were shallow, or deep, or in fast- or slow-flowing water,” said Wang from the Chinese Academy of Sciences. “Animals like the finless porpoise prefer to live in shallow, meandering waters, and very few can actually survive in deep, straightened channels.”

At the same time, construction along the river’s banks and of hydropower facilities has eaten into natural habitats — a shrinkage exacerbated by the evaporation of water from lakes whose connections to the river have been disrupted by construction.

Between the 1950s and the 2000s, Dongting Lake in Hunan province, one of the biggest lakes in the Yangtze basin, shrank by nearly 40%, according to figures from the Ministry of Water Resources.

The country’s growing demand for energy has fueled hydropower construction projects along the river’s course, disrupting its natural flow. At least 10 large dams have been built in the upper reaches of the water, and the construction of reservoirs has created large stretches of stagnant water spanning miles — conditions impossible for aquatic life to survive in.

Dams upstream, which include the controversial Three Gorges Dam, also cut off vital supplies for downstream areas. Poyang Lake, the country’s largest freshwater lake and a part of the Yangtze River network, evaporated entirely during a dry spell in 2012.

Pollution has also affected wildlife in the river. Over 40% of the country’s wastewater is discharged into the river, resulting in concentrations of toxic substances like sulfur dioxide that are nearly double the national average, according to data cited by Hu Xiaoguang, a member of the Chinese People’s Political Consultative Conference, at a meeting of the national advisory body in March.

At the same time, sand mining and overfishing have had a “catastrophic” impact on fish habitats, Wang said.

While the current situation is dire, things could still get worse, Zhang Xinqiao, a senior officer working on porpoise conservation at the World Wildlife Fund for Nature (WWF), told Caixin.

It will take until 2030 for all of the planned hydropower projects that have already received official approval to be completed, Zhang said. “The condition of the Yangtze River will not stabilize until at least 20 to 50 years after these projects are completed,” Zhang said, meaning that the river’s condition could continue to deteriorate for over half a century.

‘No precedent in the world’

The damage suffered by the Yangtze has attracted high-level attention in recent years. But little has improved in the past decade.

China’s Agriculture Ministry first implemented a springtime ban on fishing in the middle and lower reaches of the Yangtze River in 2002. The periodic ban has since been extended to cover the main tributaries of the Yangtze and the surrounding lakes, and is in effect for four months a year, from early March to late June.

The ministry is now working on a plan to impose a yearlong ban on fishing in key areas of the Yangtze River basin by 2020.

The current three-to-four-month ban on fishing isn’t enough to replenish the river’s fish stock, Cao Wenxuan, an academician at the Chinese Academy of Sciences, told Caixin. Fish hatched during the ban period don’t have time to mature and reproduce before they are caught during the fishing season, limiting the effectiveness of the ban, Cao said.

Cao said the best hope for the river would be a whole decade without fishing. The four species of fish that contribute the most to the river’s fishing industry reach sexual maturity at 3 to 5 years old, and a 10-year moratorium on fishing in the river would allow two or three generations of proliferation. “For rare and protected animals like the finless porpoise, a 10-year ban is also their hope for long-term survival in the Yangtze River,” Cao said.

It’s unclear if Cao’s proposed ban will ever be implemented. Ma Yi, director of the Agriculture Ministry department responsible for overseeing fishing in the Yangtze, has publicly stated that such a ban would be a “complex ecological issue, as well as a social and economic issue,” and that the “large-scale governance model of the entire river basin has no precedent in the world.”

But some parts of the Yangtze’s network are already under a 10-year fishing ban. In the Chishui river, no fishing will be allowed until December 2026, and fisheries are being compensated 160,000 yuan ($23,800) for each fishing boat they own.

Local governments have also been cooperating with the central government to release billions of fish into the river each year in hope of replenishing its supply.

Hope for the ‘river pig’

The fate of the baiji taught conservationists a lesson, and has spurred them to better protect its cousin, the finless porpoise, Wang Ding, a Chinese Academy of Sciences researcher who was part of the 2006 expedition to survey the Yangtze’s porpoise population, told Caixin.

But there is some hope for the “river pig.”

Baiji in ex situ conservation areas, including in Tian’ezhou Lake, also seem to be thriving, with the population in Tian’ezhou now at around 80 finless porpoises. But researchers are still trying to understand why porpoises in ex situ areas face particular problems like poor bonding between mothers and calves, Wang said.

The key to the finless porpoise’s long-term survival is “regulation of human interference and the existence of sufficient fishery resources,” Wang said.

Although the decline of the finless porpoise has slowed, habitats are still deteriorating significantly, WWF officer Zhang said. “The critical situation on the whole has not changed,” Zhang said. “There are still many things that must be done, without delay.”