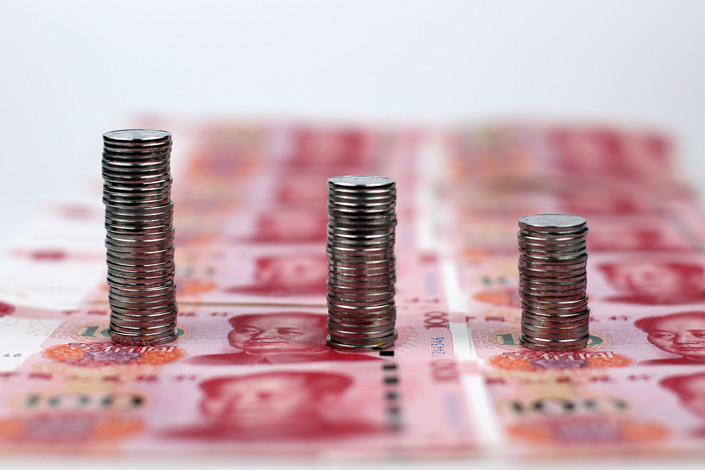 The debate that erupted in January over whether the People’s Bank of China (PBOC) should buy Chinese government bonds has exposed a major dilemma for policymakers: how will the central bank carry out one of its fundamental roles — creating money and controlling liquidity in the economy.

Like all central banks around the world, the PBOC issues currency, manages the supply of money in the economy, and controls interest rates. But the way it does that differs in many ways from other central banks such as the Federal Reserve in the U.S. and the Bank of England in the U.K.

The PBOC is mulling a major shift in the way it creates and manages the country’s money supply, at a time when it is also moving to a new framework for adjusting interest rates as it integrates the country’s financial system with the rest of the world. Part of the debate now underway is how big a role Chinese government bonds (CGB) should play in this process.

Officials from the central bank and the Ministry of Finance have been discussing how the issuance and trading of CGB could be used in the implementation of monetary policy and have reached a preliminary consensus to take practices used in developed countries as a guideline, sources close to the matter who declined to be identified told Caixin.

However, many details have yet to be fully explored — including an appropriate monetary transmission mechanism, which refers to channels through which monetary policy changes feed through the real economy, and which maturities of CGB would best enable the central bank to provide liquidity to the financial system.

“The two departments really need sit down together and go back to the beginning,” a former finance ministry official familiar with the ministry and PBOC told Caixin. “First of all they need to look at what kind of credit creation mechanism the central bank should have, what are the problems with the current mechanism, is it sustainable, and how should it be changed over the longer term.”

They also need to work out what kind of integration there should be between the government bond market, the monetary transmission mechanism and monetary policy, the former official said, and what preparations need to be made. “We really need to have this level of communication to have any chance of making progress,” he said.

China creates money and controls liquidity differently from other major central banks. In the U.S., for example, the Federal Reserve buys and sells government bonds, known as Treasurys, in open market operations in the money market as a way of adding or withdrawing liquidity in the financial system. Treasurys are a key component of the Fed’s balance sheet, accounting for about 54% its total assets.

China only began regular open market operations in 2002, but made little use of government bonds, partly because there weren’t enough available and their long-dated maturities made them unsuitable to be used as tools to mop up excess liquidity. In the absence of other available debt, the PBOC created its own financial instrument — central bank bills (CBB) — to use in open market operations.

“The Ministry of Finance has always complained that the PBOC wasn’t using CGB in open market operations, so the liquidity of the bonds was poor and they couldn’t really fulfill their basic function in the financial system,” a senior bond trader who works closely with both agencies said. “But the central bank had its own complaints about the bonds — there just wasn’t enough volume being issued, liquidity was poor and there wasn’t enough variety of maturities, so they couldn’t satisfy the needs of monetary policy.”

Central bank bills gained greater prominence starting in 2004 when China’s foreign exchange reserves started to soar. The PBOC wanted to prevent the huge inflows of capital from overseas from sloshing around the financial system, fearing it would push up inflation and lead to significant appreciation of the yuan. Banks were required to sell their foreign currency to the PBOC and received yuan in return, adding to the domestic money supply. But to control how much of the new yuan entered the financial system, the central bank forced banks to buy CBB in open market operations to control liquidity and the money supply, a process known as sterilization. The PBOC also turned to the reserve requirement ratio tool to soak up excess money.

At their peak in June 2014, foreign assets accounted for more than 80% of the PBOC’s total assets, up from 52.8% a decade earlier as the country’s foreign-exchange reserves ballooned to almost $4 trillion from $470 billion in June 2004.

But the situation began to reverse toward the end of 2014. Foreign-exchange reserves fell precipitously as capital flowed out of the country, forcing the central bank to spend its reserves to prevent the yuan from depreciating and to tighten capital controls. By the end of 2018, foreign assets had declined to nearly 60% of the central bank’s total assets and the reserves had dropped by almost a quarter to around $3 trillion.

The PBOC no longer needed to soak up the excess liquidity caused by capital inflows and gradually stopped issuing CBB – the last one was issued in November 2013. (The PBOC has recently started issuing new types of central bank bills – one onshore created specifically as part of swap arrangements for banks’ perpetual bonds, and one offshore in Hong Kong to manage yuan liquidity in the city.) But with the main source of money creation on the wane and facing the threat of shrinking liquidity in the system from growing capital outflows, it had to find other ways to increase the money supply.

As a result, claims on depository corporations on the PBOC’s balance sheet surged. In the three years to end-2018, they jumped by just over 300% to 11.2 trillion yuan, accounting for almost 30% of the central bank’s total assets, up from 8.4% at the end of 2015.

But the new tools introduced by the PBOC have shortcomings, a source close to the central bank told Caixin. Banks aren’t keen to take the loans because they are expensive and they were only designed to be temporary tools to make up for the fall in money creation caused by the drop in foreign-exchange reserves. They target certain banks and industrial sectors, and are only issued in the primary market with no follow-on activity in the secondary market, so they have a limited impact and can’t substitute for other tools that could have a significant influence on liquidity.

“Theoretically speaking, they cannot be used in the long term and cannot play a major role in controlling interest rates,” the source said.

Setting interest rates is part of the central bank’s monetary policy remit and is linked with controlling the money supply and liquidity in the financial system. The debate about how the PBOC creates money in future has coincided with a major shift underway in the interest-rate system.

The PBOC has for several years been trying to build a new market-based framework involving an interest-rate corridor using money-market interest rates to replace the traditional system of adjusting benchmark bank lending and deposit rates, which is now out of date. But progress has been slow.

Some analysts say the revival of government bonds in the PBOC’s monetary toolkit could not only be part of the solution to the problem of money creation but also a way of helping build the new interest-rate framework. It would also bring the PBOC’s monetary policy implementation in line with other major central banks.

To use CGB as a tool of monetary policy, a mechanism needs to be set up to enable the transmission of interest rates from the government bond market to other financial markets and society as a whole, so that investment and lending behavior are affected when rates change, according to Wei Shige, a senior official in the Ministry of Finance’s treasury department. This would involve changes to how government bonds are issued and traded.

In an article published in late 2017, Wei proposed that the central bank could bring CGB into its monetary policy operations on a small scale by buying and selling in the secondary market once a week as part of its daily open market operations. This would give the appearance of revitalizing the market for government bonds. At the same time, the Ministry of Finance should increase the frequency and size of its issuance of short- and medium-term bonds which would in turn allow the central bank to expand its trading activities.

“If the central bank bought more CGB, over the long term it would improve their liquidity” and their role in managing monetary policy and liquidity, a senior market participant in the bond market told Caixin. “It will also be beneficial for the opening-up of China’s capital market.”

Wei, along with Xu Zhong, the head of the PBOC’s research bureau, and Jia Kang, former head of the Ministry of Finance’s fiscal-science research institute, are also urging the government to abolish the tax exemption on interest paid on government bonds, an incentive introduced in 1992 to lure investors. But it encourages institutions, especially commercial banks, which hold 70% of CGB, to keep them until they mature, contributing to the lack of liquidity in the market. It would also bring China into line with other major economies such as the U.S., U.K., Germany and Japan, where government bonds are liable for tax.

“This is a technical issue that’s easy to fix and it would really bring the market to life,” a source at the China Financial Futures Exchange told Caixin. “It just needs the relevant high-level decision-makers to come up with an overall plan.”