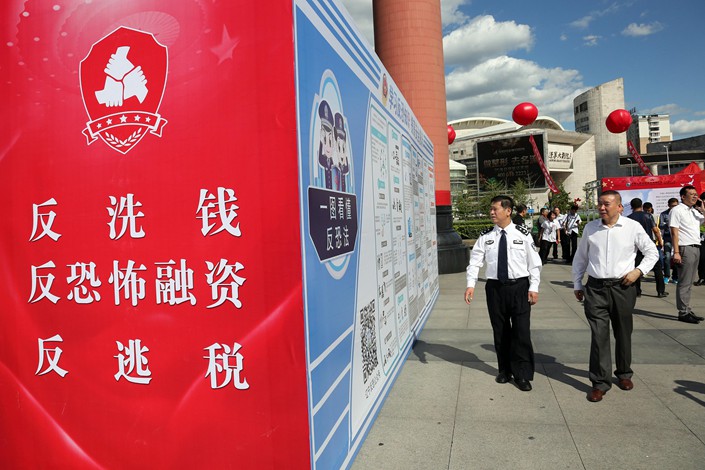 An international group set up to combat money laundering has urged China to improve the way it collects intelligence, following scandals in which Chinese banks failed to prevent such offenses.

The FATF, based in Paris, is an intergovernmental organization that sets standards and promotes countermeasures against money laundering, terrorist financing and other financial crimes. It currently has 38 members including the United States, Australia and the European Commission.

The FATF’s anti-money laundering standards are “rather high and difficult” for any country to fully comply with, a source close to the regulators told Caixin.

“But no countries have other options but to enforce the standards, because otherwise they would be put on a blacklist and be subject to severe international sanctions, or a ‘gray list’ facing financial sanctions worldwide,” which could lead to various restrictions on the overseas accounts and businesses of their individuals and companies, the source said.

The statement last week was issued after its decision-making body, the plenary, discussed an assessment of China’s compliance of its standards. The assessment is part of its mutual evaluation reports, which are peer reviews of each of the FATF’s members on an ongoing basis to assess their implementation of its recommendations to prevent criminal abuses in their financial systems. The FATF is expected to release its full report on the evaluations of China in April.

The financial intelligence unit, as the FATF pointed out in the 2012 evaluation report, refers to the China Anti-Money Laundering Monitoring and Analysis Center run by the country’s central bank, which hosts an electronic system for commercial banks to report suspicious transactions.

An official with China’s financial regulator, who declined to be named, told Caixin that the FATF is concerned that although the country has rules in places to fight money-laundering, its law enforcement measures are less than satisfactory.

“The biggest challenge for China is that whether the system we have built according to international standards can generate effects as expected.”

The reputation of China’s state-owned financial institutions has been tarnished in recent years after their overseas operations made global headlines when they were punished by foreign governments for violating money-laundering laws.

In 2016, several senior executives at the Madrid branch of China’s largest bank, Industrial and Commercial Bank of China Ltd. (ICBC), were arrested on suspicion of money laundering.

In the same year, the Agricultural Bank of China Ltd. was sanctioned by the Federal Reserve with a $215 million penalty for violating a similar anti-money laundering law.

In May last year, the U.S. unit of ICBC agreed to pay $6.16 million in fines to American regulators for insufficient measures to prevent money laundering.