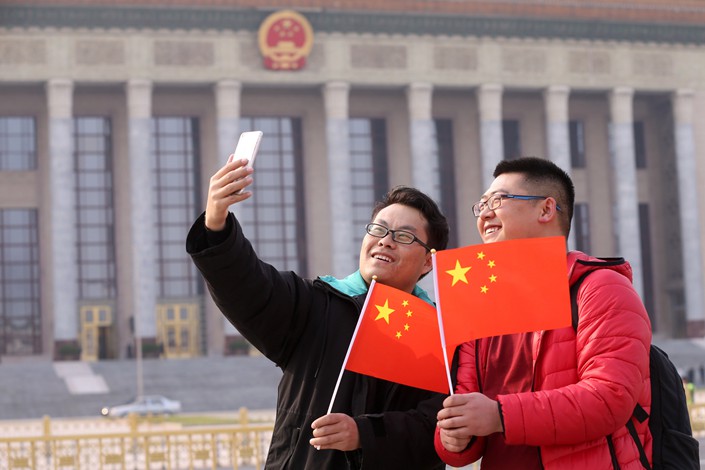 Tourists take selfies against the backdrop of Beijing's Great Hall of the People, where the Two Sessions are held, on Feb. 28. Photo: IC

The annual meeting of China’s top lawmakers and political advisers begins on the weekend. Nicknamed the “Two Sessions,” it is considered one of the biggest events on the Chinese political calendar, and allows China’s legislature to review the government’s work over the past year and hear its economic and social targets for the next.

The Two Sessions include the plenary sessions of the National People’s Congress (NPC), the country’s top legislature, and the Chinese People’s Political Consultative Conference (CPPCC), a body that advises the government on a range of issues. The CPPCC session starts on March 3, and the NPC session begins on March 5. The meetings typically last about two weeks.

Here are some of the frequently asked questions about the big political event.

Why is it important?

Normally, China’s premier will deliver a report on the government’s work to the approximately 3,000 NPC delegates on the first day of the conference. The premier’s news conference on the final day is also closely watched because he fields questions from foreign journalists. Premier Li Keqiang’s report is expected to lay out China’s gross domestic product growth goal for the year along with other key targets for consumption, unemployment and the fiscal deficit.

The ministers of various government agencies are also expected to hold press conferences during the Two Sessions, and to take questions from reporters for domestic and foreign outlets. As many of these press conferences are broadcast live to the world, they represent a chance for journalists to question officials directly.

What should we look out for?

The gross domestic product (GDP) growth target, which Li Keqiang is expected to announce during his work report on March 5, is most closely watched.

While the target was “about 6.5%” last year, analysts expect 2019 targets to be lower due to increasing downward pressure on the economy. Institutions like UBS and Morgan Stanley have predicted the growth rate could be set at between 6% to 6.5%, or about 6%.

The congress is also expected to vote on the Foreign Investment Law, which is intended to better protect the right of foreign investment in China and ensure fair competition. The law is also expected to ban local governments from forcing foreign companies to engage in technology transfers in return for domestic market access, which has long been a criticism from the Trump administration.

What is the National People’s Congress?

Technically, it is the highest organ of state power. Its roughly 3,000 delegates meet once a year to ratify or approve policies, laws, the budget and top government personnel changes. Currently, an NPC Standing Committee of more than 170 members runs the legislature and passes laws between the annual meetings.

Has the NPC ever rejected legislation?

It has never voted down a proposed law. However, ever since the legislature held its first meeting in 1954, instances of a lack of consensus have increased. In 1982, three delegates abstained from a vote for the first time. The first “no” vote was cast six years later, when Taiwan delegate Huang Shunxing voted against the nomination for chairman of the NPC’s Education, Science, Culture and Public Health Committee, according to a report (link in Chinese) on official news portal people.cn. Then in 1992, only two-thirds of the legislature voted in favor of the Three Gorges Dam project. More recently, hundreds of delegates have voted against or abstained from voting on the work reports given by the head of the top prosecutor’s office and the chief judge of the Supreme People’s Court.

Who can be an NPC deputy?

Delegates are elected to five-year terms mostly by provincial people’s congresses, who themselves are elected by lower-level assemblies. Only delegates at the lowest level — the county level or equivalent — are directly elected by the public. The People’s Liberation Army also picks some members. The 13th NPC elected 2,980 members in 2018. Six of those have since been expelled from the legislature for corruption. Three NPC deputies died in the past year. After four new people were added to the NPC, the total number of lawmakers is now 2,975.

So what does the CPPCC do?

The CPPCC is a collection of advisers that gives party and government bodies suggestions on economic, political, cultural and social issues. The CPPCC currently has more than 2,150 members. The membership is more varied than the NPC, and not everyone is a party member. Many CPPCC members are leading figures in fields such as academia, the legal profession and the business world. The body also has some star power, with luminaries like former NBA star Yao Ming and Hong Kong actor Jackie Chan holding posts.