How to Beat the Crowds in Dunhuang, Home of China’s Most Spectacular Caves 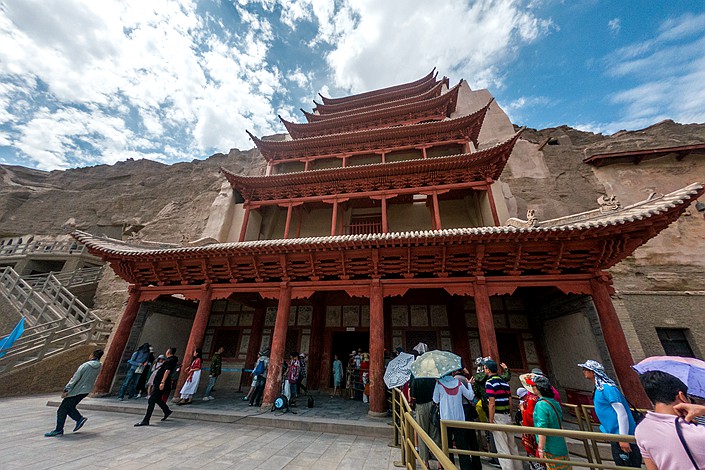 Tourists line up on Aug. 20 to visit the Mogao grottoes, which have relatively complete wooden eaves from the Tang and Song dynasties. Photo: IC

There are lots of overrated places in China. But the country is also full of incredible sights worth your time. This month, Caixin travel columnist Zhang Mei introduces us to one that, while already well known, benefits from an off-the-beaten-path approach.

Dunhuang, in northwestern China’s Gansu province, can hardly be called a “hidden gem.” It joined the UNESCO World Cultural Heritage sites list in 1987, alongside the Great Wall, the Forbidden City and the terra-cotta army. More than 1 million visitors file into its caves each year, mostly during the summer. “I queued for 2 hours and got a 1 minute viewing,” a traveler named Yao wrote online. Pretty typical.

So why am I talking about Dunhuang? For one, it’s so beautiful that it would be a crime to miss it.

Dunhuang is an oasis town way out in the Gobi Desert in Western China, a 2-hour flight west of Xi’an. Because most tourists turn south from Xi’an to go see pandas in Sichuan or take the (overrated) Yangtze River cruise in Chongqing, Dunhuang is often skipped by first-time China visitors. That’s a shame.

When travelers talk about Dunhuang, they are mostly talking about the Mogao Caves, 25 kilometers (15.5 miles) southeast of the town. The caves are a collection of 492 Buddhist grottoes whose construction spans more than 1,000 years, from the 4th century to the 14th century. The caves initially served as a place of meditation for Buddhist monks, but developed into monastery complexes later on. The Mogao complex reached its peak as a place of worship and pilgrimage during the Tang dynasty, when the Silk Road became the most important overland trading route connecting Asia to Europe. The town of Dunhuang then served as a major trading center, while the Mogao Caves became a major religious site.

The frescos in the earlier caves, still colored with aged pigment, have an almost impressionistic quality to them. You can almost see Shades of Edvard Munch’s famous painting “The Scream,” or Vincent van Gogh’s “Starry Night Over the Rhone.” Daring strokes and expressive images leap off the wall.

Some of the most popular caves are cave No. 159, where visitors pine for a glimpse of the Buddha’s smile in Shiva Sana, and No. 285, where the gods look Greek or Indian, another example of the melting pot that was Dunhuang.

Still, for a place with so much beauty, history and mystique, the Mogao Caves’ touristic offerings are incredibly boring. It’s the typical old-school museum visit: You buy an entrance ticket, follow a guide for two hours, and then you’re done. The dazzling Buddhist art leaves many travelers hungry for more, with nowhere to turn to.

Fortunately, there are ways you can carve out your own Dunhuang experience. If you are willing to put in some work, you can make your time in Dunhuang unforgettable.

Option one: Bike it

The first time I went to the Mogao Caves 20 years ago, I decided to bike there instead of riding the shuttle bus.

The 25-kilometer ride seemed like a reasonable distance, so I took off, heading eastward. The town, and the shade of trees, ended within the first 15 minutes. Then I was alone on the black asphalt road, the sun baking overhead, tanned desert stretching out on all sides. I kept biking, not a single soul in sight, but an occasional giant tourist bus came towering over me, providing a fleeting second of shade before it left me in a cloud of dust.

Half an hour into the ride, the smooth, rolling, sandy surface gave way to bumpy mounds. I had read that there were ancient tombs along this route. I had always believed in ghosts as a child, and it was July 15, the Chinese Day of the Dead. I didn’t stop to investigate what those mounds could possibly be.

I went on and soon saw the trees lining the entrance to the Mogao Caves. I realized that this must be how the early pilgrims felt when they arrived here, on camels, on horseback or by foot.

The harsh sun, sand, wind and my own fear of ghosts that day gave me a small, manageable taste of what those earlier worshipers had to deal with. One can only imagine the harsh conditions the early painters, sculptors and monks faced.

That bike ride became a lifelong memory. But if I were to do it again today, I’d carry lots of water, slab myself ghost-white with sunscreen, and wear long sleeves and a hat. And probably, take a friend or two — ideally not in the summer.

Bikes are available for rent in Dunhuang, and your hotel should be able to show you the route.

Totally smitten with the caves, I went back to Dunhuang — this time armed with history books.

The mandatory small group visit that I didn’t fancy is in fact good for protecting the caves. Among the many threats to the caves, light and carbon dioxide from the large number of visitors play a major role. In order to alleviate the pressure on the wall paintings while giving everyone a fair chance to learn, the Dunhuang Research Academy instituted a rule that all visitors must join small group tours led by their scholars. They also rotate the cave openings, so it pays to do multiple visits.

This second time I went, I befriended the curator who led our little group through the caves. He mentioned that he was visiting a nunnery out in the desert that afternoon. I tagged along.

We walked, this time through the desert. The half-bottle of water I brought along was dwindling fast, and the path in the desert seemed to be leading nowhere. Finally, we got there: A very small structure, housing an enormous statute of Shakyamuni, stood alone in the desert. I took a mental measure of the Buddha, 2 meters (6.5 feet) tall and seated on a meter-wide lotus platform, dressed in ghastly bright-colored robes, peering down straight at me. This is one of the few moments in my life when I thought about becoming religious.

The one and only nun greeted us. Her wrinkled hand, browned by many years of sun, offered me a ladle of cold spring water. Nothing tasted better in the world.

The small temple is now Sanweishan Guanyin Springs Scenic Area, with an entrance fee of 120 yuan ($17.72). You can walk there from the Mogao Caves in 15 minutes, or drive in two. Given the choice, I would still take the detour through the desert — with a guide, of course.

In October 2017, a simple online recruiting ad threw a rock in the quiet pond of the Dunhuang fan community. The official Dunhuang Research Academy was offering a weeklong course called From "Bamiyan to Dunhuang 2017" (Afghanistan's Bamiyan province was home to two giant Buddha statues which were blown up by the Taliban in 2001).

This was huge news. But why?

The course marked the first time that a research institute involved in the preservation of a Chinese treasure offered a course to nonexperts.

Of course, Dunhuang didn’t take just anybody. As my friend Cai Jinghui, a grotto art fanatic, recalled his experience in applying for the course: “In the application form, there was a blank space to list your academic achievements. I felt quite insecure. I had published many articles, but none of them had anything to do with Dunhuang. So I wrote a self-recommendation letter, admitting that I had no academic achievements, but that I love ancient art, and I love grottos. I’ve traveled to these many places, and maybe I can contribute a little to spreading the glory of Dunhuang.”

Cai runs the billion-dollar travel company Qyer.com. In 2018, he visited 108 museums. He got in.

The course was packed with expert lecturers from Afghanistan, China and Japan, and visits to exclusive caves that are not generally open to public. The short course garnered rave reviews.

The course was affordable as well — 1,250 yuan per person, with the price including all lectures, study material, site visits and meals. That is less than $200 for a nice-day course (it was extended by two days without additional fees). I am jealous of the 80 lucky students.

In October 2018, the Institute ran a similar course, “Ajanta and Dunhuang, the Art and Culture Along the Silk Road” for 120 students and doubled the fee to 2,675 yuan.

I don’t have any issue with the increase in fees. The scholars teaching these courses are big guns in their field from all over the world: a scholar from India to talk about Ajanta Bhuddist Cave Art, another from UC Berkeley to shed light on Samarkand in central Asia, and, not to mention, Dunhuang’s own scholars. The head of the Dunhuang Institute, Wang Xudong, speaks to every class.

Scheduling, however, is more complicated — especially for international travelers who have to plan in advance. I called up Zhang Tonglin of the institute to inquire about the 2019 course. He told me that the course content and application form would be available in the beginning of October.

“Oh, when is the course to take place?” I followed up.

“Most likely end of October. There is one month from application to the beginning of class,” he told me, reassuringly.

“What subject is it likely to be on?” I wasn’t ready to give up.

“That’s a secret I cannot divulge,” he said apologetically.

You can try your own luck: Follow the official Dunhuang Institute WeChat channel (WeChat ID: icaves), to stay up-to-date on future offerings, or visit the official website. Sadly course information is very limited in English.

This story has been corrected to show the correct number of Buddha statues which were destroyed and the time of their destruction.