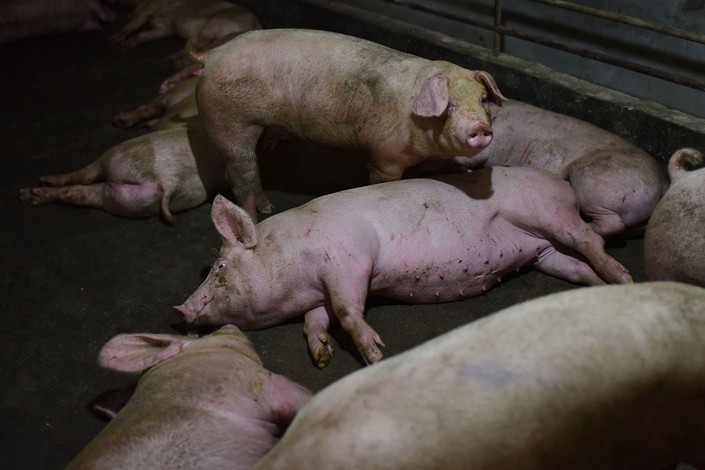 Pigs at a farm in Yiyang county, Henan province on Aug. 10. Photo: VCG

The compensation bill from China’s swine fever epidemic could run to more than 1 billion yuan ($149.5 million) — if pig farmers are actually compensated according to regulations.

Documents released by the Ministry of Finance and the Ministry of Agriculture in September 2018 put government compensation for each pig culled due to swine fever at 1,200 yuan.

But there’s a catch: in most regions the central government only provides a portion of that funding per pig, with local authorities expected to chip in the rest. It only pays 60% in China’s central regions, and 40% in eastern ones.

Pig farmers have been badly hit by outbreaks of African swine fever, which has spread to at least

28 provincial and administrative regions since it was first reported in August. But scarce financial resources in some areas are now believed to have delayed reporting of outbreaks and even encouraged locals and authorities to cover them up.

Compensation is a lifeline for many Chinese pork farmers, few of whom have insurance for their farms. Experts say there’s little in the way of livestock insurance in China, and that insurance subsidies are quite weak. While there are a few nationally-subsidized livestock-focus insurance pilots, farmers have a low awareness of risk, and there are difficulties around collecting information about insured livestock, which increases the operating costs of insurance companies.

Chen Guoqiang, a professor at Tongji University and the former director of the International Cooperation Bureau at the Development Research Center of the State Council, said that China’s design and risk management of agricultural insurance products is weak. Unlike the relatively mature agricultural insurance system in developed countries like the United States, China’s government focuses on providing price support for agricultural products and on direct subsidies.

Zhang pointed out that it would be in line with international trends and World Trade Organization rules for China to provide risk protection for farmers through insurance and through subsidies as indirect support.

In February the Central Committee of the Communist Party of China released the 2019 version of the annual “Document No. 1,” which outlines a roadmap for rural policy. While the 2018 version emphasized “speeding up the establishment of a multi-level agricultural insurance system,” the 2019 version proposes implementing pilot programs to insure farmers against income reductions and cost increases and move forward on “insurance + futures” subsidy pilots.

In addition to crop insurance, the document recommended promoting insurance for livestock products, agricultural machinery, fisheries and seed production and said a third-party oversight and compensation mechanism could ensure farmers affected by disasters are paid in full and on time.

Zhang Hongyu, deputy dean of Tsinghua University’s China Institute for Rural Studies, told Caixin that the accelerated development of China’s insurance industry has played a role in farmers’ avoidance of market, natural and epidemic risks. While Document No. 1 proposed improving agricultural insurance policies, Zhang said that “there is still a long way to go to expand the coverage, increase varieties, and raise quota standards in agricultural insurance.”

The Ministry of Agriculture said in January that more than 916,000 pigs had been culled as of Jan. 14. A Caixin estimate based on official numbers puts the current figure closer to 950,000. If the subsidies for the culled pigs were paid according to the regulations, the price tag would exceed 1 billion yuan.

Despite the outbreak and obstacles to controlling the spread of the disease, the government is nevertheless encouraging farmers to replenish their herds amid fears pork prices will spike in the latter half of 2019.

A previous version of the story used the incorrect name for the disease that has affected Chinese pig farms. It is African swine fever, not flu.