Chinese Support Wind Turbines, Just Not in Their Backyard 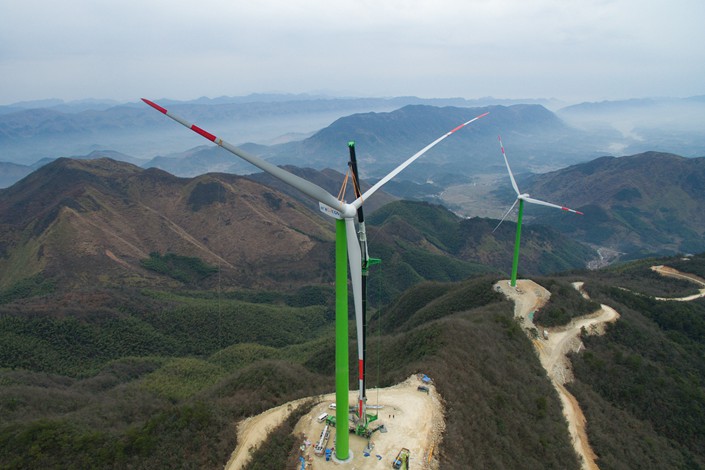 Chinese city-dwellers may be somewhat resistant to building wind turbines in urban areas, a new survey has found, with a surprisingly high proportion of people citing an unfounded fear of radiation as driving their concerns.

The survey — the largest ever poll of Chinese public opinion toward wind generators — was carried out by researchers at the University of Virginia and Stanford University, and published online in February by the peer-reviewed international journal Energy Policy.

Wind power is a promising renewable energy, particularly in China, which leads the world in wind energy power generation and has set ambitious future goals for the technology.

“As the wind industry further develops in China, there might be more wind turbine deployment in more urban areas,” Shiran Victoria Shen, now an assistant professor of environmental politics at the University of Virginia and the lead author of the report, told Caixin.

Overall, the survey found that many people lack exposure to and knowledge of wind energy and its generators, though many respondents voiced their support for further development of the sector. But the respondents also seemed unwilling to have wind turbines installed near them, a “nimby” or “not-in-my-backyard” attitude that Shen said she and the other authors of the report had expected.

“We know there is already a nimby attitude for chemical plants and waste incinerators,” Shen said. “Some survey respondents are supportive of wind energy development, but some resent the idea of wind turbines being close to them.”

The resentment occurs for a variety of reasons, the report says, including worries about noise, direct cost or impact on wildlife. However, 30% of the respondents said they were concerned about radiation coming from wind turbines — something that was not raised by the researchers in their survey, who called that “unusual.” Additional experimental surveys found respondents would be more assured by government statements that wind turbines do not pose any radiation danger than by statements from the scientific community.

Other than radiation the claims — which have been debunked by researchers — the sensitivities appeared more poignant than those observed in other countries in the Organization for Economic Cooperation and Development (OECD), a club a mostly wealthy countries.

The survey found that less wealthy neighborhoods may be “more receptive to placing wind turbines in or near their communities, especially if doing so comes with monetary incentives provided by the government.”

Chinese policymakers want wind power capacity to reach 400 gigawatts by 2030 and 1,000 gigawatts by 2050. In 2018, the nation generated 366 billion kilowatt-hours of electricity from wind energy, according to official data from the National Energy Administration.

Urban areas will likely gain more wind turbines in the future, though these may take the form of smaller, “vertical” turbines that generate less energy, but are less visually imposing and less lethal to birds.

The researchers found vertical wind turbines may meet less resistance if local governments highlight their strengths, such as the turbines being shorter, quieter and more wildlife-friendly than the giant, three-pronged “horizontal” turbine.

The Chinese government can promote wind energy deployment “because it can provide relevant information to reduce potential public resistance,” the report says, emphasizing that the government is well-placed to stymy unfounded fears about radiation.