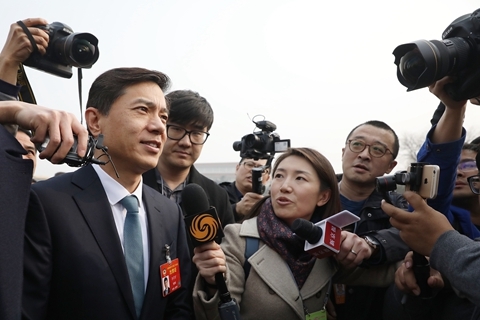 As China’s annual “Two Sessions” kick into high gear, some of the nation’s top tech leaders are in the spotlight as they promote causes that are near and dear to their hearts. Those include Tencent founder Pony Ma and Baidu chief Robin Li, two of the nation’s best-known internet figures, who were both in Beijing this week for the gatherings.

The Two Sessions is perhaps best known for the National People’s Congress, the annual meeting of China’s top legislature. But the other session, the Chinese People's Political Consultative Conference (CPPCC), brings together some of the nation’s top business leaders, among others, to provide input and advice on potential new laws in their fields of expertise.

Ma and Li are regular attendees of the CPPCC. Ma is the public face of China’s leading online game company which is also the force behind a social networking machine whose crown jewels include the QQ and WeChat instant messaging services. Li is known for his company, Baidu, which dominates China’s search market.

This year the low-key Ma was talking up data privacy, which has become a hot topic globally and is especially big in China because of local data-collecting tactics that are sometimes criticized for being overly aggressive and intrusive. “This requires a standard and guidelines,” Ma said on the event’s sidelines. “I hope that everyone will do a little more research, have some public discussion and that the government will give this more attention. Regulatory authorities should also give some guidance. Otherwise, the industry will be more chaotic and there will be no uniform rules to implement.”

Meantime, Li was talking up artificial intelligence (AI), an area he sees as the future for Baidu, which is placing big bets on self-driving cars. Li offered up three proposals for future legislation surrounding AI, including one for expanding research on AI ethics, one for improving the regulation of electronic medical records, and one for using AI to solve traffic-related problems.