Whither M2? Money Supply Target Falls Out of Favor 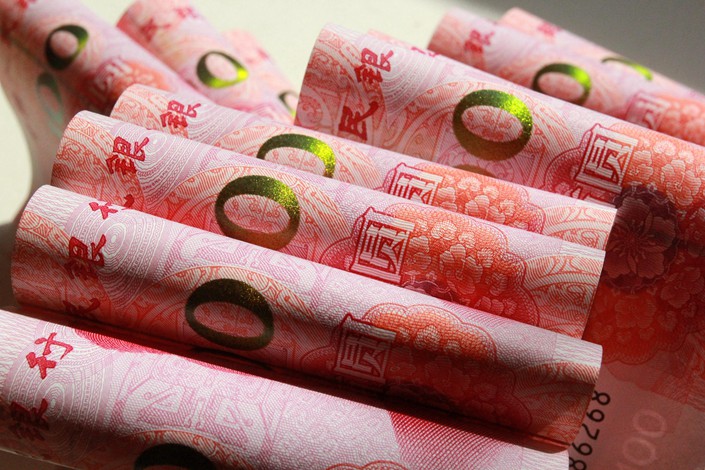 Despite the omission of the target from this year’s work report, the premier did make several references to M2. Photo: VCG

Among the deluge of targets, percentages and figures given in the Chinese government’s three big work reports released on Tuesday, one important number was missing — the estimate for growth in M2, the country’s broadest measure of money supply.

The closely watched indicator was left out of Premier Li Keqiang’s annual work report to the National People’s Congress (NPC) for the second year running, a move that may reflect the central bank’s efforts to downplay the importance of M2 as an indicator. It also helps ensure that monetary policy doesn’t become hostage to a target, giving the authorities more flexibility to respond to changes in economic conditions.

“The omission of M2 is a signal of a more flexible monetary policy,” Chaoping Zhu, global market strategist at J.P. Morgan Asset Management in Shanghai, told Caixin, pointing out that in recent years M2 growth has come in lower than the annual targets set in the work reports. In 2017, for example, a goal of 12% was set up the while the figure for the year was just 8.1%.

The People’s Bank of China (PBOC) has been trying to shift the market’s focus away from M2, a measure of money supply that includes cash in circulation and demand deposits (M1), plus household deposits and time deposits. Officials have pointed out that the indicator has become less correlated with the growth in gross domestic product (GDP) expressed in real terms after taking inflation into account.

It has also become less accurate as a measure of credit growth and liquidity as the massive expansion in shadow banking has spawned new channels of financing. Indeed the PBOC last year expanded its definition of M2 in January 2018 precisely to take account of such activities, especially the growth in banks’ off-balance-sheet business.

At a briefing during last year’s NPC, Zhou Xiaochuan, the outgoing PBOC governor, elaborated on the omission of the M2 target and suggested the indicator was becoming less relevant and useful when deciding on changes in monetary policy. “In future the focal point will perhaps shift from quantitative changes in broad money to a focus on prices,” he said, views echoed by new central bank Governor Yi Gang at a Caixin roundtable last year.

Despite the omission of the target from this year’s work report, the premier did make several references to M2.

“Our prudent monetary policy will be eased and tightened to the right degree,” he said in the report. “Increases in M2 money supply and aggregate financing should be in keeping with nominal GDP growth to keep major indicators within an appropriate range.” Last year’s report only mentioned that M2, credit and total social financing should increase at a reasonable pace.

Li’s comments imply that overall leverage in the economy will remain stable this year, fixed-income analysts at Beijing-based investment bank China International Capital Corp. Ltd. (CICC) wrote in a report. They estimate that M2 growth this year will be in a range of 8% to 9% if GDP rises by around 7% to 8% in nominal terms, which doesn’t take inflation into account. The growth target for real GDP this year has been set in a range of 6% to 6.5%.

The premier’s work report suggests that monetary policy remains “accommodative but prudent” and its language on M2 and total social financing “is more of a guidance rather than a binding target,” economists at Morgan Stanley wrote in a report Tuesday.

The premier also reiterated that monetary policy will not lead to the release of a flood of liquidity into the economy to shore up economic growth.

“We will ensure the valve on aggregate money supply is well controlled and refrain from using a deluge of stimulus policies,” Li said in the report. The authorities will “flexibly” use a variety of monetary policy instruments “to improve the transmission mechanism of monetary policy, maintain reasonably sufficient liquidity, effectively mitigate difficulties faced in the real economy… and forestall and defuse financial risks,” he said.

Li’s report highlighted the fund-raising difficulties of private enterprises and small and micro businesses, and pledged measures that would improve their access to affordable financing.

To achieve that goal, the government will require large state-owned lenders to increase their new loans to small and micro businesses by more than 30% this year. The government will also continue to encourage the development of inclusive finance, a term that refers to universal access at a reasonable cost to financial services including savings, credit and insurance.

Some analysts say the 30% target is a reflection of the increasing emphasis on supply-side structural reform in the financial sector. The concept has become a key policy priority for the coming year for financial regulators, in contrast with the emphasis on implementing the government’s de-leveraging up until mid-2018.

Li’s references to monetary policy in the work report were mostly made in the context of alleviating difficulties faced by companies in accessing affordable financing.

“We will reform and refine monetary and credit supply mechanisms, and employ as needed a combination of quantitative and pricing approaches, like required reserve ratios and interest rates, to guide financial institutions increasing credit supply and bringing down the cost of borrowing, ensure targeted and efficient support for the real economy, and avoid funds circulating within the financial sector without entering the real economy or being diverted out of the real economy,” Li said.