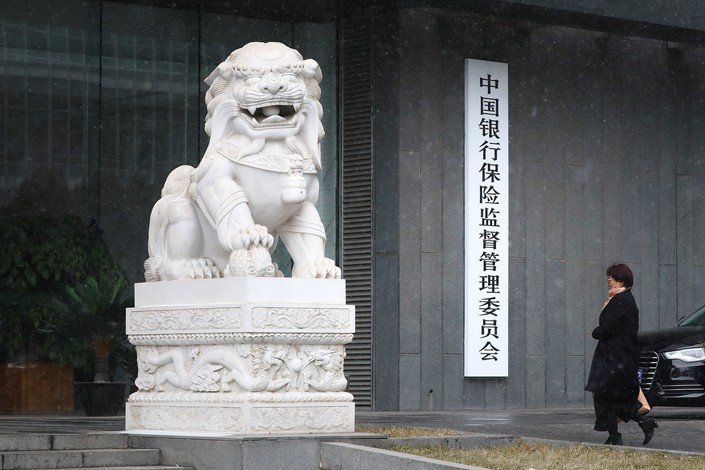 The Beijing headquarters of the China Banking and Insurance Regulatory Commission in Beijing, Feb. 14. Photo: VCG

Supply-side structural reform has become the latest buzzword among China’s financial regulators, although the concept has been a central fixture in the policymaking landscape for the industrial sector for several years.

President Xi Jinping first introduced supply-side structural reform to China back in late 2015 and it has dominated key economic policy documents since 2017 with a focus on cutting industrial overcapacity, reducing the stock of unsold homes, cutting borrowing costs and taxes for companies, deleveraging the corporate sector and improving “weak links” in the economy.

It was only recently that the concept broadened its scope to specifically include the financial sector. In a speech last week, Xi specifically called for supply-side reform in the financial sector to strengthen its ability to serve the real economy — sectors that actually produce goods and services — and since then it has been highlighted by regulators as one of their main policy goals, although many of the measures are a continuation of existing policies.

Earlier this week, the People’s Bank of China (PBOC) stressed that efforts to promote supply-side structural reform in the financial sector would be a key policy priority for the coming year. The China Banking and Insurance Regulatory Commission (CBIRC) has also been publicizing its commitment.

At a press briefing on Thursday, officials from the commission spelled out the measures they planned to take to push forward supply-side reform. These include offering more diversified and differentiated financial products and services, strengthening the monetary transmission mechanism (channels by which credit and monetary policy changes feed through to the real economy) and improving the allocation and efficiency of financial resources.

Bringing new players into the financial markets and increasing the supply of financing are the most-needed steps in supply-side structural reform, according to Xiao Yuanqi, chief risk officer of the CBIRC.

Xiao emphasized that while regulators want to improve the supply of capital to ensure ample liquidity in the markets, they will not allow the economy to be flooded with credit, echoing similar comments by a central bank official this week, who sought to downplay the prospect of aggressive monetary loosening.

Improving the supply of financing will involve shifting “inefficient” credit from industries suffering from overcapacity to areas with greater need, such as small and micro businesses in innovative and strategic sectors, Xiao said. Poorly performing companies with little prospect of improvement will be guided to exit the market through reorganization or bankruptcy.

No banks in China have been allowed to fail in recent years, and Xiao said that while some institutions will be allowed to experiment with bankruptcy, regulators will mainly use mergers and restructuring to defuse risks and force unqualified players out of the market.

The authorities will also encourage lenders to step up efforts to offload their non-performing loans (NPLs), Xiao said. The banking sector has disposed of 3.48 trillion yuan ($519 billion) of bad loans over the past two years, CBIRC data show, but commercial banks still have 2 trillion yuan of NPLs on their balance sheets. The overall ratio of NPLs to total loans at commercial banks stood at 1.83% at the end of 2018, up from 1.74% at the end of 2016.

As part of supply-side reform, financial institutions will be expected to offer more differentiated and customized products and services to meet customer demand. They will also be encouraged to show more flexibility in their operations to enhance their ability to support the real economy, such as accepting patents and other unconventional assets as collateral for loans, Xiao said.

China has more than 4,000 banks, including 159 commercial banks and hundreds of rural cooperatives, but is dominated by five large state-owned lenders. In 2013 the government gave the green light to the establishment of privately owned banks in an effort to liberalize the sector and better serve private businesses and individuals. However most of these new lenders have reported sluggish business growth and many have been exposed to greater risks due to shortcomings in their management and governance.

Xiao said regulators will continue encouraging smaller private players to join the market to expand access to credit for small and micro businesses but will also work out measures to contain risks associated with small financial institutions.

Ensuring credit flows smoothly from the financial system to where it’s needed in the economy is another important part of supply-side reform in the financial sector, Xiao said. The CBIRC is studying measures to improve the monetary transmission in the banking system and considering giving a greater role to smaller institutions in process, he said.

Regulators will also make efforts to remove barriers that prevent capital flowing between different sectors including banking, the bond and stock markets, and venture capital to make markets more connected and improve the efficiency of capital flows, he said.

But measures should also be put in place to prevent arbitrage activities involving so-called empty fund transfers that divert capital away from the real economy, said Xiao, a response to concerns expressed last month by Premier Li Keqiang that the surge in bill financing and short-term loans in January risked leading to the inefficient circulation of funding.