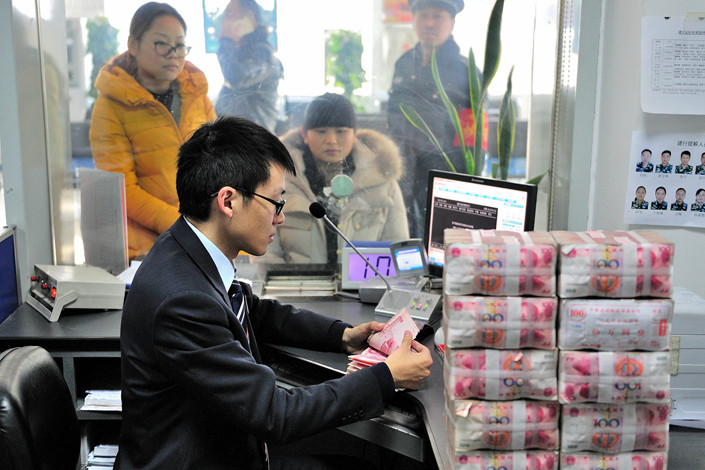 Large state-controlled banks are required to increase their loans to small enterprises by more than 30% this year, the CBIRC has said in a notice. Photo: VCG

China’s banking authority has urged banks to give out more loans to small enterprises, as part of a broader plan to aid the country’s private sector.

Large state-owned lenders have been asked to take a leading role in the initiative and increase lending to certain small companies by more than 30% this year, the China Banking and Insurance Regulatory Commission (CBIRC) said in a notice (link in Chinese) on Monday.

The CBIRC specifically wants the banks to boost lending to companies with credit lines under 10 million yuan ($1.5 million), the notice said.

Loan to private companies have been on the rise in China over the last year as the government has stepped up efforts to aid the private sector. By the end of the fourth quarter of 2018, there was 33.5 trillion yuan ($5 trillion) in outstanding bank loans to small and micro companies and 9.4 trillion yuan in outstanding loans to firms with credit lines of less than 10 million yuan, according to CBIRC data (link in Chinese). The latter figure was up 21.8% year-on-year.

However, experts have expressed concerns over the risk of a potential rise in bad loans as the competition to issue such loans has grown fiercer, multiple sources in the banking industry told Caixin.

One bank auditor was concerned that banks might skimp on their credit standards as they rush to comply with the regulator’s initiative. That could lead to an increase in bad loans, the auditor said.

To address the issue, the CBIRC has also urged commercial banks to establish an effective risk control system and told the banks not to excessively issue loans.

Also, to stop banks from reporting inaccurate numbers, the regulator said that it will clarify what types of loans can be classified as lending to private firms. It also offered to exempt banks from responsibility for making bad loans as long as their due diligence was done properly. The CBIRC notice did not explain what it meant by the exemption.

The measure is in line with the government’s recent efforts to aid the private sector, which provides roughly half of the country’s tax revenue, accounts for 60% of its gross domestic product and employs 80% of the urban workforce.

At a symposium with entrepreneurs in November, President Xi Jinping promised “unswerving support” for the private sector and outlined six ways to aid private companies, including easing taxation and administration costs and helping private companies to obtain financing.

As a result, Chinese authorities have rolled out measures to help, including promises of tax cuts and better access to financing. Following the call of financial regulators, brokerages have set up billions of yuan in funds that specifically aim to provide private sector financing.