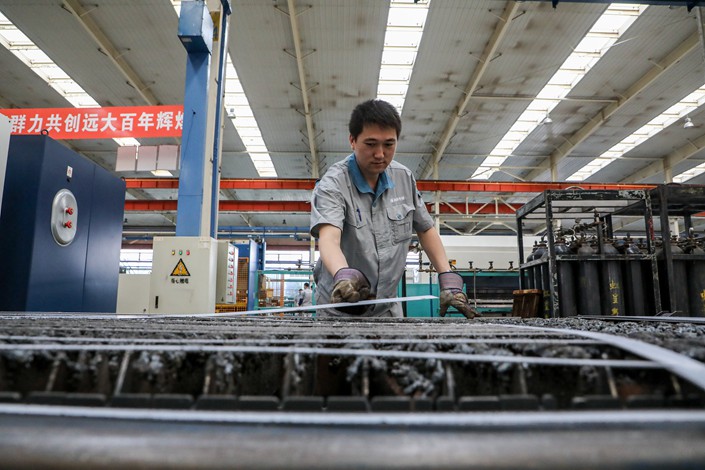 A worker assembles an elevator in a factory in Shenyang, Liaoning province on June 14. Photo: VCG

The government will ease business costs with tax cuts and tax exemptions for small businesses and tech startups, promote greater financing availability for the private sector and encourage local authorities to offer financial aid to private companies with sound business outlook, Xi said at a seminar with private executives. The government aims to create a fair playing field for all businesses, he said (link in Chinese), according to the Xinhua News Agency.

The president’s remark came at a time of heated debates over the idea that “the private sector is leaving the stage,” as discussion participants have put it, following a wave of takeovers of private business this year by state-owned enterprises.

The private economy “shouldn’t leave the stage. Instead, it should move toward a broader stage,” Xi said.

As of the end last year, China had more than 27 million private companies with total registered capital of 165 trillion yuan ($24 trillion). The private enterprises accounted for half of the country’s tax revenue, 60% of gross domestic product and 80% of urban employment.

The central government has been reiterating its support for the private sector as growth in the world’s second-largest economy slows amid a trade war with the United States. Top leaders have stepped up efforts to shore up market confidence, as the economy grew by a slower-than-expected 6.5% in the third quarter, its weakest since the global financial crisis.

Private companies, which have long faced higher hurdles in obtaining financing compared with state-backed competitors, have been especially hard-hit by slowing business as well as the government’s years-long national deleveraging campaign.

In mid-October, Xi promised “unwavering support” to the private sector, following a remark by Vice Premier Liu He that those who do not support the development of private enterprises “must be resolutely corrected.” Financial regulators have taken multiple measures to encourage banks to lend to private and small businesses.

The government will also improve policy implementation to ensure that measures to cut capacity and financial leverage will be equally applied to private and state companies, Xi said. Authorities will also build a healthy relationship between government and business while better protecting private assets, he said.

“The country’s private economy could only expand, not be weakened,” the official news agency Xinhua quoted Xi as saying.

But Xi acknowledged that private companies in China are under pressure with slowing growth, limited financing access and business and economic transformation. Such difficulties are results of both internal and external challenges, Xi said. Enterprises should be confident in the country’s economic resilience and policies, he said.

Business sentiment has declined as trade tensions with the U.S. deepen. In October, the official manufacturing Purchasing Managers' Index fell to 50.2, the lowest reading since July 2016. A reading above 50 indicates expansion, while a reading below signals contraction.

In a Wednesday meeting of the Politburo, the top policy-making body headed by Xi, officials warned of “profound changes” in the external environment and “growing downward pressure” on the economy.

Analysts said the official account of the meeting shifted from previous ones and showed top leadership’s greater acknowledgment of pressure on the economy.