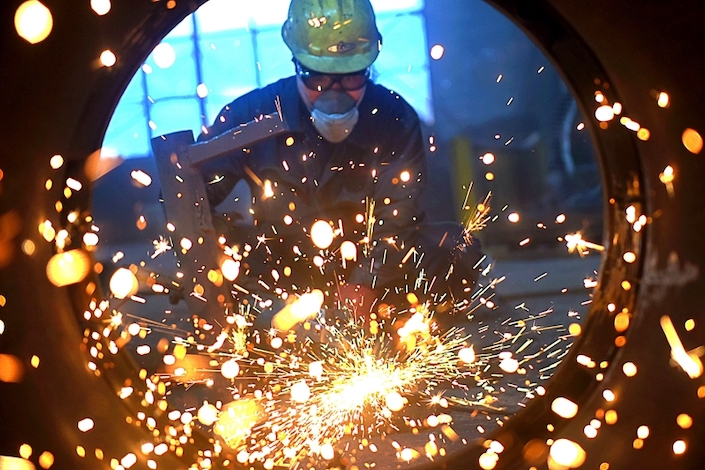 * Chinese regulators since late October have rolled out a slew of policies to bolster private-sector confidence by increasing credit availability, reducing taxes and expanding market access

Since late October, China’s top leaders have mounted an unprecedented rescue for the private sector. But banks have been slow to ramp up lending, and the government’s efforts may not go far enough, according to some business executives and analysts who urge fundamental market reforms.

Policymakers at the State Council, the central bank and other regulatory bodies have moved to restore confidence, mainly by easing access to financing. Local authorities have pledged to bail out cash-strapped private businesses in the face of a sharp decline in equity markets.

“People’s expectations were very poor” and many private businesses were on the verge of defaulting on debts, said Niu Li, an analyst at the State Information Center.

This has serious implications for the Chinese economy as growth slowed in the third quarter to the lowest level in almost a decade. China’s private companies account for half of tax revenue, 60% of gross domestic product and 80% of urban employment.

The private sector’s struggles reflect the cooling economy, the government’s long-running liquidity-tightening campaign and the deepening trade war with the U.S. In addition, the stock-market rout has increased the pressure on many private companies that relied on loans backed by pledged shares. Tumbling equity values triggered a rush of margin calls.

Rising raw-material costs benefit upstream state-owned enterprises (SOEs) that produce raw materials and components while squeezing downstream private companies that make finished goods, according to research by Zhongtai Securities. Meanwhile, private companies are more vulnerable to the national campaign to crack down on pollution and industrial overcapacity than their state rivals. Over the past three years, for example, the number of private companies in the mining industry declined by 42% while the number of SOEs fell 22%, Zhongtai found.


Rush to the rescue

As those threats to private enterprises piled up, the government forcefully stepped in. At a Nov. 1 symposium with entrepreneurs, President Xi Jinping promised “unswerving support” for the private sector and outlined six ways of aiding private companies, including easing taxation and administration costs and helping private companies to obtain financing.

In the following days, central bank Governor Yi Gang proposed a three-pronged policy portfolio to increase bank loans, debt and equity financing for private firms. Top banking regulator Guo Shuqing suggested goals that at least a third of big banks’ new corporate loans should go to private companies and that lending to the private sector should account for no less than half of banks’ new corporate loans in three years.

As of Nov. 15, eight provinces and 13 cities have proposed special funds totaling 110 billion yuan to bail out cash-strapped listed companies through equity investments and loans, although most of the funds are still raising money.

The main theme of the rescue campaign has been to improve credit availability to private companies, which have long been at a disadvantage compared with state-backed companies.

Guo, chairman of the China Banking and Insurance Regulatory Commission (CBIRC), told media Nov. 9 that banks’ credit support for private enterprises doesn’t match the private sector’s share of the national economy. Although private companies account for more than 60% of the economy, they receive only 25% of bank lending. Guo said the figure should be doubled in the next three years.

So far this year, the central bank has pumped more than 2.5 trillion yuan ($360 billion) of liquidity into the banking system through reserve requirement cuts and relending and rediscount programs aimed at increasing loans to small and private businesses.

To encourage banks to lend to small and private borrowers, the central bank said it would adjust assessment criteria on commercial banks to give private sector loans more weight.

But the recent credit push raised investor concerns about increased risks from a lending rush and a potential rise in bad loans. Bank stocks slumped across the board the day after Guo’s comments.

Despite the rescue efforts of the central government and top regulators, most banks so far have taken a wait-and-see stance before cranking up private lending, Caixin learned.

“We will wait to see detailed regulations or requirements to make changes,” one bank staffer said.

Banks are wary partly because many of them are still struggling with bad assets accumulated during the credit boom after the global financial crisis, fueled by the government’s 4 trillion yuan stimulus package. This later forced Chinese authorities to wage its sweeping, years-long deleveraging campaign.

“The policy risks are huge,” one commercial bank manager said. “The changes are sudden, and it’s difficult for us to judge the future.”

Some officials also voiced concerns. Wang Zhaoxing, vice chairman of the CBIRC, recently warned that financial institutions should not ease risk controls or lower credit standards in pursuit of lending to small businesses.

“The private company financing difficulties can’t be fixed by a single strong therapy,” said a person at a bank wealth management department. “Campaign-style support will lead to greater risks.”

Despite the government’s repeated vows to reform the tax system and cut the cost burden for businesses, private companies’ tax payments have grown rapidly, outpacing those for state-backed companies. This partly reflects the uneven effects of a shift in recent years away from direct taxes on business to a value-added tax system, which was supposed to reduce the burden. At the same time, SOEs tend to have it easier in obtaining preferential tax policies from local authorities.

According to Chen Yongjie, deputy director of Beijing Dacheng Enterprise Research Institute, tax revenue from private companies rose 35.6% from a year earlier during the January-September period, compared with 0.3% growth for SOEs. Meanwhile, profit growth of private businesses reached just 9.3% during that period, according to Chen.

“The big gap raises one question: Does China really cut tax burden? For whom?” Chen said.

At the Nov. 1 meeting with entrepreneurs, Xi promised to make substantial tax cuts to effectively alleviate the burden on business. In an article published last week, finance minister Liu Kun said this year’s tax cut policies will reduce overall taxes and fees by 1.3 trillion yuan and his ministry will follow up with more tax-cut measures.

Amid the rescue campaign, regulators should carefully identify which companies are worth bailing out, analysts said. A better-functioning bankruptcy mechanism should be in place to allow troubled companies to exit the market, they said.

Recent policy signals and support measures have relieved some of the unease of private businesses and steadied the equity market, but solving the private sector’s troubles will require more fundamental changes, analysts said. What private companies need most is not capital but profitable business and investment opportunities, several private businessmen said.

“A crucial thing is a market with fair competition,” said one private executive, calling for deepening market reforms, especially among state-owned enterprises.

“The ultimate goal is to form stable and long-term expectations among private businesses,” a private equity manager said. “It can’t be achieved by (government) orders but only by rule-based market operation.”