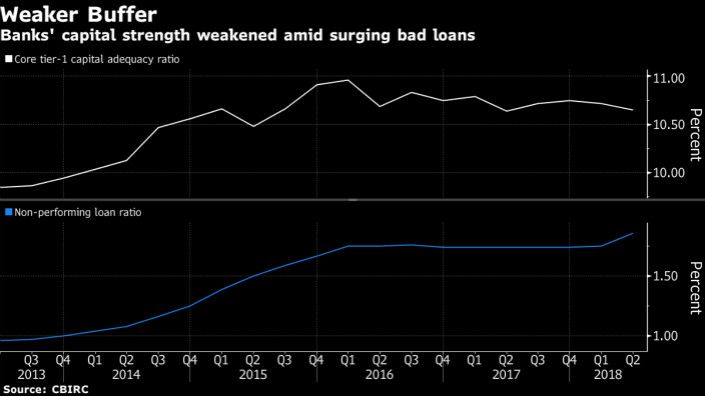 (Bloomberg) — Chinese authorities clarified the requirements on banks to lend to private companies, after investors balked at what were seen as unprecedented government demands on lenders.

Regulators won’t set specific targets for each bank, four of the nation’s state-run financial newspapers said in front-page stories on Monday. Firms should conduct appropriate due diligence rather than comply with the lending requirements “unconditionally,” the China Securities Journal said.

Banks shares dropped on Friday on concerns that policy makers were taking an increasingly heavy-handed approach toward the financial sector. The worries were prompted by comments from a senior financial regulator, who said that at least one-third of new loans should go to non-state companies. That was seen as a sign of policy makers’ urgency and triggered concerns banks would be pushed into making unwise loans.

Friday’s market reaction, which saw bank shares drag down the stock market, was “an over-interpretation and severe misjudgment” of the policy, Shenwan Hongyuan analysts led by Ma Kunpeng wrote in a note published on Monday. “We don’t think banks will take a sudden swerve to aggressively adjust their asset allocation, but rather turn steadily to boost support to private companies,” they said.

Banks stocks were seeing mixed performance on Monday. Industrial & Commercial Bank of China Ltd. declined 0.4% at 9:33 a.m. in Shanghai while up 0.2% in Hong Kong.

Companies in China are finding it harder to repay debt as demand for goods and services stays sluggish. Non-state firms defaulted on 67.4 billion yuan ($9.7 billion) of local bonds this year, 4.2 times that of 2017, data compiled by Bloomberg show. Moderating factory inflation and steadying consumer price-data released Friday underscored the trend and highlighted room for additional stimulus.

China’s central bank said on Friday the global outlook is worsening and that it’ll tweak its policy in a sign that trade tensions with the U.S. are hurting the world’s second-largest economy.