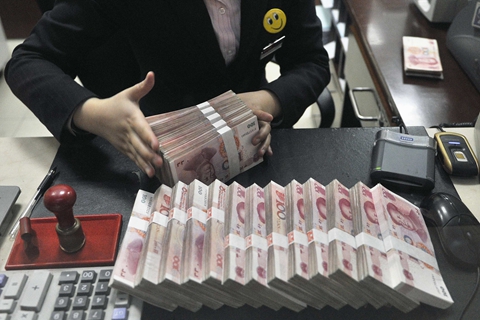 Banks’ loans to non-state companies accounted for less than a fourth of total loans in China. Photo: VCG

Chinese authorities are stepping up measures to expand credit to private companies in a bid to bolster the cooling economy. Bank stocks fell amid the central government’s continued pressure on lenders.

The State Council, the cabinet, in the most recent move called on the country’s major commercial banks to lower average lending rates for small enterprises by 1 percentage point from the level of the first quarter, according to a statement (Link in Chinese) published after a Friday meeting chaired by Premier Li Keqiang.

Policymakers have made repeated pledges and initiated a series of measures to support private companies, which have been struggling widely in the face of the stock market rout, record corporate defaults and a cooling economy.

But the recent credit push raised investor concerns about risks from a lending rush and a potential increase in bad loans. On Friday, banks listed on the Shanghai and Shenzhen market slumped across the board. A banking industry analyst said the declines reflected worries about a possible increase in non-performing loans.

Private businesses, which account for 60% of China’s gross domestic product and 80% of urban jobs, receive only 25% of bank lending, according to Guo, chairman of the China Banking and Insurance Regulatory Commission (CBIRC), in an interview published Wednesday.

“The next step is to increase support for private and small enterprises to make sure state-owned enterprises (SOE) and non-state companies will be treated equally,” the cabinet said on Friday.

The average borrowing costs of SOEs are 1.5 percentage points lower than for private companies, according to a 2017 study by the Chinese Academy of Fiscal Science, an institution under the Ministry of Finance.

In May, Li Junfeng, a senior CBIRC official, said banks’ average lending rate to small, private companies ranged from 5.1% to 7%. Rates offered by the nontraditional banking system, including microloan companies and private lenders, were as high as 24% to 36%.

To encourage lending to small businesses, loans for small firms with credit lines of 10 million yuan ($1.44 million) or less will be included in collateral for the central bank’s medium-term lending facility (MLF), the cabinet said. The upper limit was expanded from the previous 5 million yuan.

Banks should consider lending to small businesses as part of their internal assessments with implications for employee salaries, the cabinet said.

Also on Friday, the central bank said it will adjust criteria of its macro-prudential assessment (MPA) for commercial banks in the fourth quarter to give more weight to loans for small and private businesses.

Yang said the central bank is also working with bond market regulators to roll out credit support for private companies’ bond sales as early as next week.

The central bank has pumped a net 2.3 trillion yuan of liquidity into the economy this year by cutting banks’ reserve requirements four times and targeting increased lending to small and private businesses. The monetary authority has also used relending and rediscount tools to encourage loans to the private sector.

Some banks have responded to regulators’ calls. China Merchants Bank, one of the country’s biggest joint-stock banks, said its lending to small and micro-business in the first eight months this year has matched the total for all of last year. The bank cut its August lending rate to small business by 24 basis points, or 0.24 percentage points, from the first quarter, according to Vice President Liu Jianjun.

The central bank’s Yang cited Beijing as an example. Loans to private companies in the capital city increased to 808 billion yuan by the end of September, a rise of 15.3% from the same time last year. Growth of loans to private enterprises in Beijing outpaced other lending by 1.8 percentage points, Yang said.