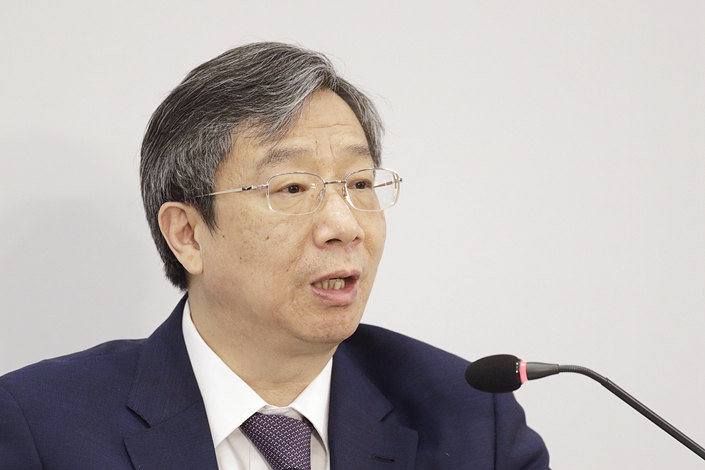 * Measure aims to address the risks posed by recent sell-offs in listed company shares, which have been a major source of market volatility

As government agencies rush to respond to President Xi Jinping’s call to support the private sector amid a severe cash crunch and the pledged shares crisis, the central bank has unveiled a new funding tool to provide temporary support for companies struggling to find money.

Yi Gang, the governor of the People’s Bank of China (PBOC), announced the measure in interviews published by the official Xinhua News Agency late Tuesday and key state media on Wednesday including the People’s Daily.

The central bank is planning to provide funds for a “private company equity financing support tool,” which will form part of a “three-pronged policy portfolio” to broaden the availability of financing for private firms, he said.

As well as offering support, Yi also made a rare acknowledgement for a public official that government policy contributed to the problem. He said that some of the previous regulatory tightening was “not very well considered and lacked coordination,” and its implementation caused some unintended consequences that “worsened the financing difficulties of private companies.”

The PBOC will in the future listen more to the opinions of private companies and financial institutions, test new measures on a limited basis before rolling them out, allow companies more time to adjust their businesses to comply with regulations, and avoid a “one-size-fits-all” approach, he said.

In addition to money from the PBOC, the new support tool will be funded by investors including private fund managers, securities firms, and the financial asset investment arms of commercial banks. The measure is partly intended to address the risks posed by share sell-offs in listed companies, Yi said. It will “provide temporary equity financing support for private companies that have funding difficulties following market-based principles and the rule of law,” he said.

Listed nonstate companies and their big shareholders have been a major source of volatility in China’s stock market this year. The government’s crackdown on shadow banking and heightened regulatory scrutiny of the financial sector has led to a liquidity crunch that’s left cash-strapped businesses and their owners struggling to get money and refinance their debts.

With alternative funding channels drying up, many major shareholders pledged a large portion of their holdings as collateral for loans. As the stock market slid, they had to hand over more shares or cash to compensate lenders for falling prices. Many faced the prospect of losing control of their firms and some sold their stakes to the state sector, including local government bodies, to raise funds.

“We need to guide irrational expectations and behavior in the financial market” in such situations, Yi said.

But he also warned that in their ongoing effort to restore market vitality, regulators need to stick to market rules, prevent administrative intervention from causing moral hazard, and respond to concerns in a timely manner to guide the formation of “stable expectations.”

Chinese authorities have become increasingly vocal in expressing support for private companies in recent weeks after a wave of takeovers of private business this year by state-owned enterprises triggered growing complaints that the sector was being marginalized by the government. At a seminar with representatives of private enterprises at the beginning of this month, Xi promised the government would beef up aid to the sector by cutting taxes and expanding its access to financing, among other measures. The meeting followed Xi’s letter to private entrepreneurs published on Oct. 21 pledging support for the private economy.

The central bank on Oct. 22 announced a 150 billion yuan ($21.6 billion) increase in its relending and rediscounting quota to encourage financial institutions to lend to small businesses and private companies. That doubled the increase in the quota for 2018 to 300 billion yuan.

Yi said in his Tuesday interview that the jump in this year’s quota is a record and the central bank is open to giving out more money if there is market demand.

Also on Oct. 22, the PBOC said it would offer cash for a plan to help private firms sell bonds. Caixin has learned that as part of the program, the PBOC will provide 10 billion yuan to state-owned China Bond Insurance Co. Ltd. to enhance its ability to provide insurance products for debt issued by private companies.