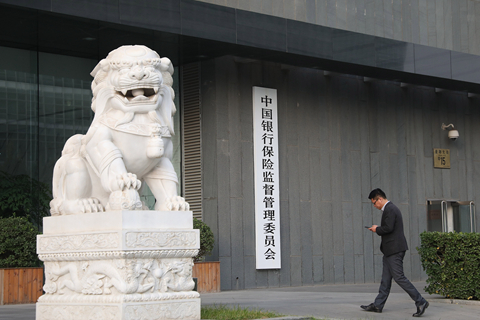 China’s banking and insurance regulator plans to further loosen restrictions on the equity investments insurance companies can make as part of the government’s efforts to bolster the stock market.

The China Banking and Insurance Regulatory Commission (CBIRC) is soliciting public feedback on a draft of new rules that would remove most limits on the equity sectors in which insurers can invest insurance funds.

The regulator said Friday on its website that the change would be intended to further improve the economic efficiency of support from insurance industry capital for the real economy.

The moves could clear the way for the insurance industry to pour trillions of yuan into stocks. Official data showed that at the end of 2017 the industry had combined assets totaling 16.8 trillion yuan ($2.7 trillion). Under the current rules, insurers can invest up to 30% of total assets in equities.

As of the end of September, Chinese insurers invested 2.19 trillion yuan ($320 billion) in mutual funds and stocks, or 13.75% of their total assets, the highest level this year.

Under current rules, equity investments by insurance funds are limited to insurance companies, non-insurance financial companies and equity in companies with pension, health-care and auto services businesses that are related to the insurance sector.

The new draft would remove such restrictions but add that insurance funds should choose sectors and companies taking into consideration safety, liquidity and profitability.

For insurers’ investments in equity funds targeting mergers and acquisitions, investments can include stocks of listed companies but are limited to non-transaction transfers, such as strategic investments, private placements and block trades. Such investments should account for no more than 20% of a fund’s total assets, according to the draft.

The CBIRC will make separate rules for venture capital investments by insurance funds, as well as investments in key projects supported by national policy, debt-to-equity swaps and equity of small and medium-sized enterprises and technology companies.

But regulators have recently switched to encouraging insurers to invest in listed companies and help mitigate liquidity risks related to shares pledged as loan collateral as fears of slowing growth in the world’s second-largest economy have put pressure on domestic and global stock markets.

On Thursday, the CBIRC issued rules clearing insurance funds to invest in stocks through specialized investment products. Such investments will not be subject to existing restrictions on the portion of assets that insurers can invest in stocks.

There have been only five cases of acquisitions of more than 5% stakes in listed companies by insurers so far this year, according to data from the Insurance Association of China. Most the targets are industry leaders, and their controlling shareholders pledged a high percentage of their shares.

Take refrigerator maker Guangdong Homa Alliances Co., for example, the refrigerator maker in which Tianan Life Insurance bought more than 5.9% in May. Homa Chairman Zhao Guodong, who owned a controlling interest in the company, had pledged nearly all his holdings, or about 17% of the company’s total shares, for loans.