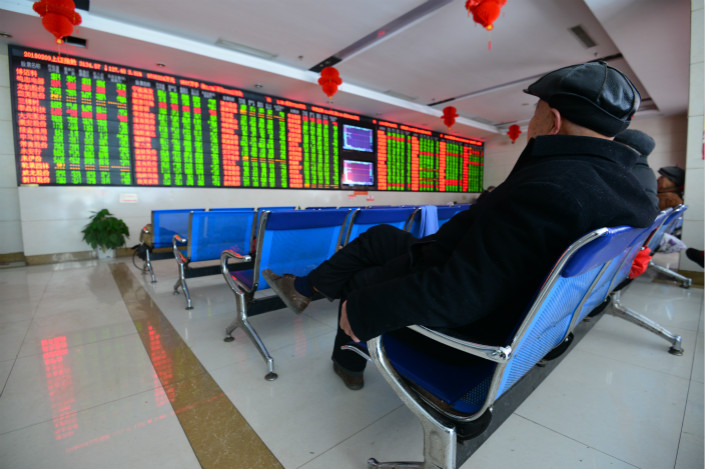 Chinese shares posted their worst weekly performance in two years, tumbling 9.6%, as markets in both the mainland and Hong Kong plunged following a similar correction in the U.S. and other global markets.

The Shanghai Composite Index, China’s major benchmark, dived by 4.05% on Friday to end the week at 3,129.85 points. The gauge twice dipped by as much as 6% in the morning and afternoon sessions, with blue chips and other heavily weighted stocks retreating the most. The weekly decline of nearly 10% was the worst since January 2016, when China was experimenting with “circuit breakers” to prevent excess market volatility.

Kweichow Moutai Co., the world’s most valuable liquor maker, declined by 2.5%, while leading brokerage Citic Securities Co. slid by its daily limit of 9.8%. About 102 companies, equaling about 3% of all listed companies in Shanghai and Shenzhen, fell by their daily 10% limit.

“You can clearly see where the selling pressure is,” said Hong Hao, head of research and strategy at BOCOM International, noting a sudden reverse of appetite for blue-chips and large caps as those stocks came under pressure after strong gains to start the year.

The hit on blue chips dragged down the CSI 300 Index, a gauge that tracks 300 heavily weighed stocks in Shanghai and Shenzhen, by 4.3% on Friday. The gauge was down 10.1% this week, wiping out its gains since the start of this year.

“It will be very difficult for the selling pressure to ease at the moment, as the momentum is equally strong going down as it was going up,” Hong said. “It's a mirror image of what we saw in the first couple of weeks of the year.”

The Shenzhen Component Index fell by 3.6% for the day, while the Nasdaq-style ChiNext board fell by 2.98%. Hong Kong’s Hang Seng Index, which is more intricately linked with the global financial system, was down 3.1%.

The Chinese sell-off followed major declines on Wall Street this week. The Dow Jones Industrial Average dropped 1,032.89 points, or 4.1% on Thursday, marking its second-steepest point decline on record, after a 1,175.21-point swoon on Monday. The Monday plunge infected stocks in Hong Kong and on the ChiNext, which posted their worst single-day drops in more than two years on Tuesday, both tumbling by more than 5%.

Mainland shares have suffered from bearish sentiment since February, with the benchmark gauge declining by 2.7% last week and now down 14% from last month’s high.

Some analysts said that Chinese equity markets are facing their own specific pressures from an ongoing financial deleveraging campaign and forced selling by shareholders who pledged shares as collateral for loans from banks or brokerages.

A slew of small companies have also announced unexpected shortfalls in their earnings forecasts, while downward pressure has been further exacerbated by fresh expectations of tighter regulations on risky investments by trusts.

“The downward pressure is likely to continue, as investors’ appetite turns more conservative and they are less willing to invest more ahead of the weeklong Spring Festival holidays,” said Ethan Wang, head of investment strategy at Standard Chartered China.