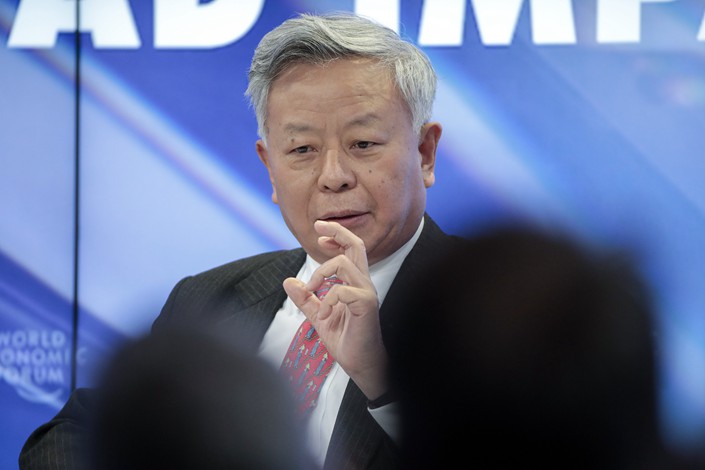 At its founding in January 2016, the Asian Infrastructure Investment Bank (AIIB) set a goal to lend $10 billion to $15 billion a year over its first five to six years in business. But by the end of September this year, the China-led multilateral development bank had managed to issue less than $6.4 billion in loans, according to its own data.

Jin Liqun doesn’t seem to be bothered, however. “AIIB’s investment strategy has been prudent. We will steadily increase our annual investment in the future,” the AIIB president said.

The AIIB, which specializes in investing in infrastructure projects in Asia that might have trouble getting financing elsewhere, has a responsibility to check out any project seeking to borrow money, so it shouldn’t expand too quickly, said Jin, who is halfway through his first five-year term.

The bank’s prudence is partially a result of a changing global economy over the last two-plus years. The Federal Reserve, the U.S. central bank, has stepped up the pace of interest rate hikes, which has broadly increased financing costs and has led some emerging market currencies to depreciate against the U.S. dollar. That has made it harder for infrastructure projects in Asia to obtain financing in their home countries.

In addition, U.S. President Donald Trump has imposed tariffs on products from multiple countries, particularly China, which has disrupted global trade patterns. Debt pressure on emerging economies has also hindered investment. For instance, Malaysia cancelled two multibillion-dollar infrastructure projects with China because it was afraid it couldn’t handle the debt.

In the next half of his term, Jin said he will also try to attract more private investors to help fund infrastructure projects because the AIIB alone cannot meet Asia’s immense demand for infrastructure financing.

Asset management companies and pension funds usually shy away from infrastructure because such projects usually require long-term investments, but are generally characterized by high risk and low returns. Private investors have invested in nine of the AIIB’s 32 projects. Their investments amounted to $1.1 billion, or 18% of AIIB loans.

The AIIB was created to fund investment in Asia. Of its 32 projects only two were outside of Asia. And both were in Egypt. The AIIB may expand to other continents. This year, it signed deals with development banks in Africa and Latin America to provide financial services, implying the AIIB is considering how to expand its influence globally.

The following is an edited excerpt of Jin’s interview with Caixin.

Caixin: What will the AIIB’s priorities be for the second half of your term?

Jin Liqun: When the AIIB first stared, we co-financed quite a few projects with multilateral institutions like the World Bank. In the future, we plan to gradually use our own capabilities to carry out more independent projects. … We are preparing to launch a new department called the Country Program Unit. Although the name might change, we are putting more emphasis on communication. … The department’s staff will visit high-level leaders in different countries and understand their needs.

The AIIB is also will further encourage private-sector investment and reduce the debt pressure on borrowing countries. The current trade disputes will definitely affect China. If China is affected, there’s going to be a domino effect in which countries related to China will come under additional pressure. If China’s economic growth slows, it will impact countries that export to China. At present, despite the uncertainty in the macroeconomic situation, we can’t stop doing business and we can’t increase the public sector debt of other countries. Therefore, we have to encourage more private sector investment.

Are there any new plans for investment projects in the next two years?

The scope of the projects will also expand. The AIIB is developing an investment strategy for “other productive sectors.” Our main focus is on infrastructure, but we are also interested in other areas such as manufacturing. The strategy shift is waiting on the board’s approval.

In 2015, you predicted that the AIIB will loan out between $10 billion and $15 billion in its first five to six years of operation. But in fact, in the two and half years since AIIB was established, the bank has loaned out only about $6 billion. What is the reason for this gap between expectations and reality?

Since its inception, the AIIB has been adhering to a prudent strategy for infrastructure investment, especially in its first five years. In fact, in less than three years since it opened, the AIIB has been able to invest more than $6 billion in infrastructure projects. It is already a big achievement, fully recognized by member states, international credit rating agencies and the market.

While doing its utmost to meet the needs of infrastructure investment, the AIIB attaches great importance to the quality of the projects it invests in. (It looks at factors) including financial health, compliance with environmental protection and social security standards and requirements. Annual investment in the AIIB will increase steadily with the expansion of the bank’s investment team, the accumulation of investment experience, and its deepening cooperation with member governments.

The AIIB has already received AAA ratings from international ratings agencies. The bank has previously said publicly that it will consider issuing U.S. dollar debt. What is the current progress of issuing dollar debt, and is there any plan for refinancing in the short term?

This depends on the window of opportunity. We are capable of raising funds in the international capital market at a low cost, but we are not short of funding at the moment.

When the AIIB was founded, there was this idea that the AIIB could be a platform to internationalize the yuan (also called renminbi). Is the AIIB providing any funding in renminbi, especially in the offshore market?

The renminbi has joined the International Monetary Fund’s basket of reserve currencies, and the AIIB treats the renminbi as a convertible currency. Many countries want us to include the renminbi as a settlement currency. Based on the demand, we will consider how to fulfill their needs.

What impact will China’s macroeconomic situation have on the AIIB, considering that China is a major shareholder of the bank?

As a major shareholder, I believe that China’s financial support of the AIIB will not be affected by its macroeconomic situation. The key is the impact of China’s market on its neighboring countries, especially China’s trading partners.

China is taking a series of measures to maintain its economic growth and create job opportunities, including the government’s clear signal to support the private sector. At the moment, confidence is very important. I think China may adopt some very specific policies to maintain its own economic growth, which is good for China’s trading partners and members of the AIIB.