By Jason Tan and Pei-Hua Yu of Caixin Globus 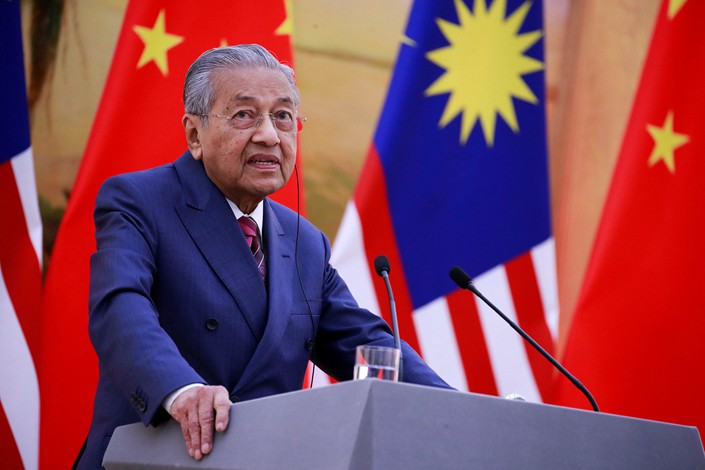 Malaysia's Prime Minister Mahathir Mohamad speaks during a news conference at the Great Hall of the People in Beijing on Aug. 20. Photo: VCG

Mahathir said the projects involve huge amounts of money, and Malaysia does not really need them at the moment, considering the high debt burden left by the country’s previous government.

The projects were suspended in July. They are the $20 billion East Coast Railway Link, which stretches 688 kilometers (428 miles) to connect the South China Sea off the east coast of the Malay Peninsula with the strategic shipping lanes of the Straits of Malacca to the west.

The others are two pipeline projects worth a combined $2.3 billion — a petroleum pipeline stretching 600 kilometers along the west coast of the Malay Peninsula and a 662-kilometer gas pipeline in Sabah, the Malaysian state on the island of Borneo.

Chinese state-owned firms and lenders are involved in all three projects.

At a Chinese foreign ministry briefing on Tuesday, a spokesman didn’t directly address Beijing’s stance when reporters asked about the scrapped projects.

“It’s inevitable that there will be hiccups when any two countries begin collaborating,” Lu Kang said.

Lu said such differences should be resolved through “friendly mediation” that take long-term bilateral relations into account.

Mahathir said China’s President Xi Jinping and Premier Li Keqiang understood the reasons behind the cancellation of the two major projects, according to Bernama.

“I have explained to them and they understood the situation and accepted them,” the report quoted Mahathir as telling journalists at the end of his five-day official visit to China.

“Initially, there were some misunderstandings but now they understood why we do it. I don’t think China wants us to be bankrupt,” he said.

In an exclusive interview with Caixin on Monday, Mahathir said Malaysia is seeking to reach a mutually beneficial outcome with Beijing as Southeast Asia’s third-largest economy plans to “postpone or scrap” some mega projects funded with money borrowed from China.

“Malaysia has been borrowing a lot of money from China. And now it’s faced with the problem of repayment of the loans, and that is why we have to maybe reduce or postpone some of the projects in Malaysia,” Mahathir said on Monday. “So it’s nothing to do with Chinese business. It is just our need to reduce the amount of money we borrow from other countries.”