By Fran Wang and Liu Jiefei 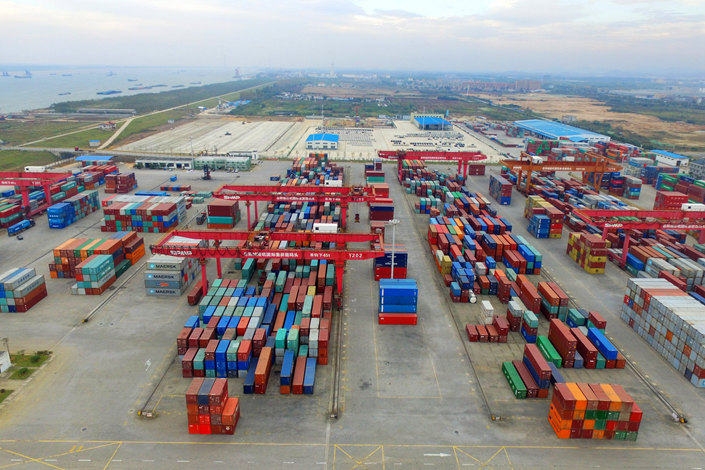 *Analysts argued that the rapid expansion of exports was significantly driven by a rush on orders ahead of scheduled U.S. tariff hikes, and that this strength will not last

(Beijing) — The expansion in China’s overseas shipments picked up in October for the second straight month, official data showed Thursday, as exporters scrambled to speed up deliveries to beat a planned increase in U.S. tariffs that will dent their profits.

Exports by the world’s largest trader in goods jumped 15.6% last month from a year ago to $217.3 billion, China’s General Administration of Customs said in a statement. The rate extended an acceleration in export growth last month from August, rising at the fastest pace since February. It also beat a median forecast for an 11.7% increase in a Bloomberg News poll of economists.

“While shipments to the US held up well, those to other parts of the world grew even faster, suggesting that perhaps global demand is more resilient than expected, although a weaker Chinese yuan also helps the country’s exporters,” he wrote in a note.

The year-on-year increase in China’s exports to the EU, Japan and the 10-member Association of Southeast Asian Nations moderated last month from September, but the gain in shipments to other markets such as South Korea, Brazil, Russia and India all accelerated, according to customs data.

The U.S. is China’s largest overseas market and buys around 20% of the country’s total exports.

Exports to the U.S. last month climbed 13% from a year earlier to $42.7 billion, after hitting an all-time high of $46.7 billion in September, customs data showed.

The strong figures came in the wake of the latest U.S. tariffs — an additional 10% levy on $200 billion of Chinese goods — which took effect in late September. That’s likely because exporters continued to rush deliveries as Washington is scheduled to increase the duty to 25% in January. Analysts widely predicted the strength of Chinese exports to the U.S. would not last much longer.

The duties followed similar taxes imposed on $50 billion worth of imports from China by U.S. President Donald Trump’s administration in July and August. Beijing has responded with its own retaliatory taxes on American products.

“We believe front-loading activity continued in October and will extend into the last two months of 2018 as exporters hurry their shipments in anticipation of higher tariff rates in 2019” upon U.S. importers’ requests, Nomura economists said in a report.

The rush was so widespread that shipping companies are charging sharply higher prices for cargo to the U.S., the economists said. For example, the container freight rate to the U.S. from Ningbo, a major port in eastern China, surged 48% from July to October, while that to Europe declined by 14%.

Imports from the U.S., however, edged down 1.8% year-on-year to $10.9 billion in October, as China’s retaliatory tariffs on American cars, soybeans and other goods dampened domestic companies’ demand.

Trade tensions between the world’s two biggest economies have escalated since July, with both sides continuing to raise trade barriers against each other. Any hope of progress on stalled bilateral trade negotiations has grown on the back of positive messages sent by Trump and President Xi Jinping after they spoke on the phone on Friday.

The trade dispute with the U.S. is expected to extend the trend of China’s imports growing faster than its exports, Kuijs said, as the Chinese economy continues to grow at a much more rapid pace than most of its trading partners and as Beijing lowers tariffs on goods from other countries.

“We expect this trend to continue in the coming years, supported by the trade conflict with the US and reduction in Chinese import tariffs,” he said. “Indeed, we expect China’s current account surplus to virtually disappear this year.”

“Robust imports, especially commodities, could be an indication of a rebound in infrastructure investment and a stabilisation of the property market,” said Betty Wang, senior China economist with ANZ Research. “Winter demand for energy imports may have also helped.”