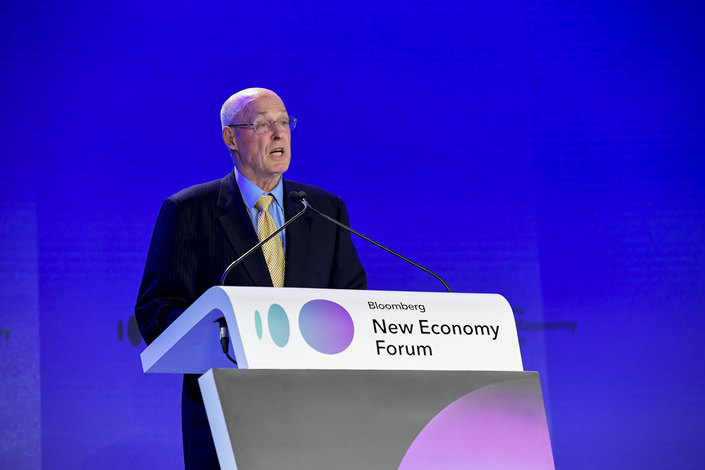 (Singapore) — There’s a risk of an “economic Iron Curtain” forming in the global economy if the world’s two largest economies do not move past their disputes and come up with a workable consensus, former U.S. Treasury Secretary Henry Paulson said Wednesday in Singapore.

“There’s obviously a lot of finger pointing between Beijing and Washington these days,” said Paulson, the current chair of the Paulson Institute think tank. “This reflects rapid change and the emergence of a very different strategic dynamic.”

Paulson’s speech at the Bloomberg New Economy Forum, during which he offered suggestions on improving Sino-U.S. relations amid an ongoing tariff war, came ahead of a potential meeting between Chinese President Xi Jinping and U.S. President Donald Trump at the end of November, when the Group of 20 summit takes place in Argentina’s capital of Buenos Aries.

The two countries have held several rounds of trade talks this year, all of which failed to produce a breakthrough. Since July, each side has imposed additional tariffs on half of its annual imports from the other.

Paulson gave several reasons for how the U.S. and China arrived at this moment of heightened tension. First, the two sides have diverging interests. On many issues where they should agree, such as North Korea, they too often pursue divergent approaches. Second, they disagree about some important rules governing the international system, such as maritime rights and customs. Third, American and Chinese views are opposed in some critical areas. For example, China argues for cyber sovereignty and the right of the state to control data and cross-border data flows, which the U.S. rejects.

“Taken together, these and other drivers, such as China’s cyber practices and island building in the South China Sea, have fueled a new consensus in Washington that China is not just a strategic competitor but very possibly our major long-term adversary,” he said.

“America’s longstanding ‘engagement’ policy is now widely viewed as being of little use for its own sake,” he said. “Nobody is arguing against dialogue, but nearly everybody is arguing that the results of U.S.-China dialogue and engagement have been poor.”

The Sino-U.S. tariff war will eventually be concluded, but the underlying tensions will persist, he said. “Unless these broader and deeper issues are addressed, we are in for a long winter in U.S.-China relations.”

Paulson took an economic area as an example, saying that nearly 20 years after entering the World Trade Organization (WTO), China still hasn’t opened its economy to foreign competition. The country retains joint venture requirements and ownership limits, as well as using technical standards, subsidies and regulation as nontariff barriers to trade and investment. “This is simply unacceptable. It’s why the Trump administration has argued that the WTO system needs to be modernized and changed. And I agree,” he said.

“In large part because China has been slow to open its economy since it joined the WTO, the American business community has turned from advocate to skeptic and even opponent of past U.S. policies toward China,” he said. “American business doesn’t want a tariff war, but it does want a more aggressive approach from our government.”

For 40 years, the China-U.S. relationship has been characterized by the integration of four things — goods, capital, technology and people. However, after these years of integration, a surprising number of politicians and pundits on both sides advocate policies that could forcibly de-integrate the two countries across all four of these aspects, Paulson said.

If this persists, “I fear that big parts of the global economy will ultimately be closed off to the free flow of investment and trade. And that is why I now see the prospect of an ‘economic Iron Curtain’ — one that throws up new walls on each side and unmakes the global economy,” he said.

Regarding those voices in the U.S. advocating a U.S.-China “divorce,” Paulson said no country will “divorce” a major nation that remains among the world’s fastest growing major economies.

“Washington now strikes many people as attempting to disrupt all aspects of China’s external economic relationships,” he said. “This risks setting Washington up for a new round of battles with its allies and partners — the very partners it needs to help alter Chinese behavior. And this is what I mean by American ‘self-isolation.’”

China needs to rediscover the spirit of market-driven reform and opening-up, which would address the longstanding criticisms while doing wonders for its own economy, Paulson said.

He suggested China’s leaders pursue reforms by allowing foreign firms to compete with Chinese firms on a level playing field, and Chinese private firms to compete with state firms in the same way. Also, China should strengthen those pillars that permit firms to be run commercially, which means strengthening corporate boards, not Communist Party committees, as the tool of external supervision, he said.

“The key to avoiding an ‘economic Iron Curtain’ is for China to see its interest clear in making these kinds of reforms and changes. If China doesn’t move quickly, I suspect the calls for ‘divorce’ will intensify,” he said.