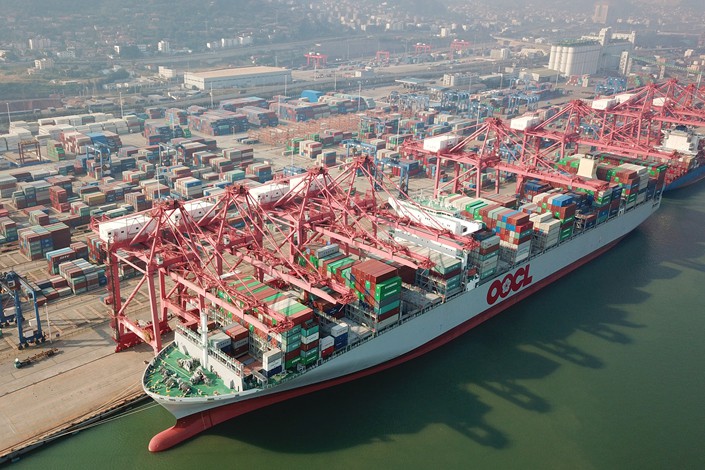 Cargo gets loaded and unloaded on Oct. 12 at a port container terminal in East China's Jiangsu province. Photo: VCG

President Xi Jinping renewed a pledge to increase China’s imports, lower trade barriers, and strengthen protection of intellectual property rights (IPR) while also lashing out at countries who point their fingers at Beijing’s policies without doing anything to improve their own business environment.

Xi spoke at the opening of China’s first national import expo on Monday, an event aimed at showcasing the country’s commitment to globalization amid a bitter trade dispute with the U.S.

“Actively expanding imports is not a temporary measure by China, but a long-term, future-oriented strategy to promote the joint development of countries around the world,” Xi said in his speech which kicked off the China International Import Expo (CIIE) in Shanghai. China will “always remain a stable engine driving global economic growth and a robust market for all countries to explore business opportunities,” he added.

The week-long fair, whose theme is New Era, Shared Future, was announced by Xi himself a year ago and has been described by the Ministry of Commerce as a “key approach to show China’s firm support for free trade, economic globalization and market liberalization.”

The Chinese authorities hoped to use the event to showcase the country’s willingness to import more and further open up its markets against the backdrop of President Donald Trump’s demands for Beijing to take action to reduce its expanding trade surplus with the U.S.

There had been speculation that Xi might announce measures aimed at soothing President Donald Trump’s hostility toward China and prevent an escalation in the dispute with the U.S. that is expanding beyond trade in goods. But no major new initiatives were proposed, although Xi ran through a list of policies and measures China is taking to encourage imports, such as cutting taxes on imports and opening up more sectors to foreign companies, products and services.

Without naming the U.S., Xi reprimanded countries who criticized the policies of others while failing to sort out their own problems and warned that aggressive economic policies that follow “the law of the jungle” will eventually hit a “dead end.”

“All countries should make efforts to improve their business environment and fix their own problems,” Xi said. “They shouldn’t always paint themselves (as perfect) and point their fingers at others, always shining a spotlight on others but not themselves.”

Analysts cautioned that Xi’s pledge on imports is not as impressive as it appears given that China’s annual imports of goods and services have already reached more than $1.8 trillion and nearly half a trillion dollars, respectively. A figure of $30 trillion over 15 years would amount to just $2 trillion a year.

“The goal of importing $40 trillion of goods and services in the next 15 years is not ambitious,” Louis Kuijs, head of Asia economics at research firm Oxford Economics, told Caixin. That’s less than 60% of the firm’s own estimate of $72 trillion over the same period, he said.

In his speech, Xi vowed to “firmly punish behavior that encroaches on the lawful rights and interests of foreign companies, particularly intellectual property right infringements,” adding the government will introduce a “punitive compensation institution” to “sharply raise the legal costs” of violating IPR.

Foreign businesses in China reacted to Xi’s speech with caution, saying they are more interested in seeing the government act than continue to feed them with promises.

“President Xi again affirmed China’s commitment to reform and opening, but his speech offered little to suggest we will see an acceleration of market opening measures,” said Kenneth Jarrett, president of the American Chamber of Commerce (AmCham) in Shanghai.

“Still, we hope today’s speech is matched by concrete actions that eliminate those market access barriers that continue to prevent foreign companies from realizing their full potential in China. Now that it is the world’s second-largest economy, China can afford to open its doors all the way.”

William Zarit, chairman of the American Chamber of Commerce in China, said he was hoping for more change.

“We will see if this leads to the timely sweeping reforms needed for a fair and reciprocal bilateral commercial relationship. Hopefully it will,” he said.

China’s economy grew 6.5% year on year in the July-September period, the weakest expansion since the first quarter of 2009, when the global economy was in the depths of the financial crisis. Increasing concerns that growth will slow further and worries over deepening trade friction with the U.S. have sent the domestic stock market plunging this year.

But Xi downplayed concerns about the outlook for the Chinese economy and said there was every reason to be confident about the future.

“Overall, favorable conditions are in place for the long-term, healthy and steady growth of the Chinese economy,” Xi said. Economic growth is stable, the government capacity for macro-economic regulation is increasing, and efforts to deepen reform across the board have unleashed new drivers of growth, he said. Xi also pointed to the Belt and Road Initiative and the growing trade and investment with countries along the route.

As part of broader efforts to encourage innovation, a key plank of government policy, Xi announced that the Shanghai stock exchange will set up a board for high-tech companies which will trial a new registration-based Initial Public Offering system that has long been discussed by regulators.