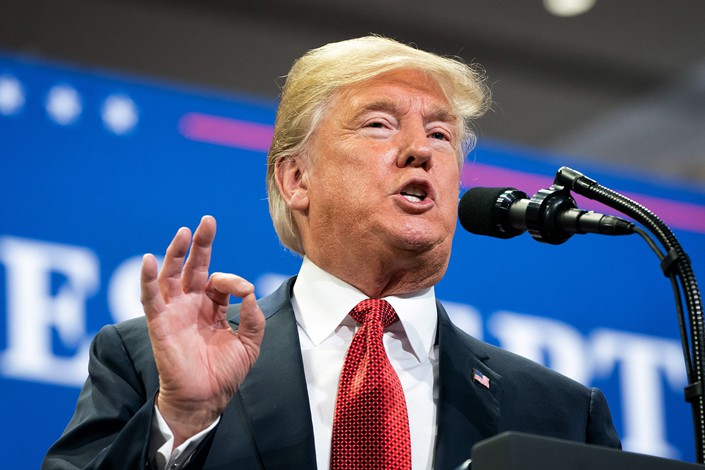 U.S. President Donald Trump said on Monday in a Fox News interview that he expects a great deal with China. Photo: VCG

President Donald Trump said Monday that the U.S. will make a “great deal” with China on trade, while threatening billions of dollars of extra tariffs if a deal isn’t done.

“I think we will make a great deal with China, and it has to be great, because they’ve drained our country,” Trump said in an interview with Fox News host Laura Ingraham. “I have $267 billion waiting to go if we can’t make a deal,” he added.

Trump’s words came ahead of the highly anticipated meeting between him and Chinese President Xi Jinping at the G-20 summit in Buenos Aires, Argentina next month.

Bloomberg reported early Monday morning that the U.S. is preparing to announce tariffs on all remaining Chinese imports by early December, which could possibly amount to $257 billion in new levies based on last year’s import figures, if Trump and Xi fail to reach an agreement.

“As for additional tariffs on China by the U.S., I want to reiterate that if the U.S. truly wants to resolve the economic and trade issues with China, then it should adopt a serious attitude and have equal-footed talks with us in good faith, instead of letting out this or that kind of remarks every now and then to try to intimidate China, because no intimidation will work on us,” Lu Kang, spokesperson of China’s Ministry of Foreign Affairs, said later on Monday at a regular press conference.

The Trump administration has imposed tariffs on $250 billion worth of Chinese imports since July, while Beijing has retaliated with new levies on $110 billion of U.S. goods. Each side has now imposed charges on half of the other side’s annual exports and Washington has threatened to slap tariffs on all Chinese sales to the U.S.

Trade tensions have already started to have an effect on China’s economy. Although the direct impact from the trade war has been limited so far, as exports have held up, analysts said the spat has undermined confidence, which has caused domestic demand to soften, lowering growth of gross domestic product (GDP).

China’s year-on-year GDP growth slowed to 6.5% from July to September, the weakest since the first quarter of 2018. “The weakness in domestic demand may well have been affected indirectly by the trade dispute, which is increasingly viewed as a ‘cold war’ by some Chinese observers after the recent speech by U.S. Vice President Pence, as consumers and corporates delay their consumption and investment decisions amid heightened uncertainties,” according to a report by economists at Goldman Sachs, a bank.

In an early October speech, Pence criticized Beijing’s economic and military practices and accused China of meddling in the upcoming U.S. congressional elections.