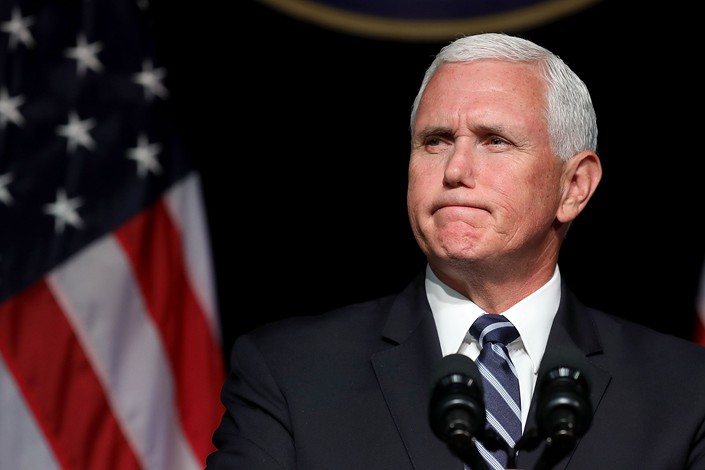 Beijing has fired back at U.S. Vice President Mike Pence’s claims that it is meddling in America’s democracy and elections, describing the allegations as “slander” and “ridiculous.”

China’s response came one day after Pence on Thursday accused Beijing of waging an “unprecedented effort to influence American public opinion” ahead of critical congressional elections in November.

“To put it bluntly, President Trump’s leadership is working; China wants a different American president,” Pence was quoted as saying by AFP at the Hudson Institute, a conservative think-tank based in the U.S. capital. “There can be no doubt — China is meddling in America's democracy."

Pence's address came before Secretary of State Mike Pompeo’s scheduled visit to China on Monday, a trip which will focus on nuclear diplomacy with North Korea — an area in which the U.S. still seeks Beijing's cooperation.

“This confuses right and wrong … creates something that didn’t ever exist,” she said in a statement (link in Chinese.) “China is strongly opposed to it.”

She added that it’s “ridiculous” for Washington to view normal exchanges between the two sides as an attempt to interfere in America’s politics and elections — which she said would violate Beijing’s diplomatic principles.

This latest spat adds fuel to already-high bilateral tensions, as the two economic powerhouses are locked in a rising trade conflict that has seen both parties impose tariffs on hundreds of billions of dollars’ worth of products since July.

On Wednesday, China said the U.S. was responsible for postponing a scheduled security meeting between the two countries, denying reports that Beijing had initiated the delay.

“The claim that the Chinese side proposed to postpone the Second Round of the China-U.S. Diplomatic and Security Dialogue distorts the facts and is out of ulterior motives and very irresponsible,” Hua said on Wednesday.

The Chinese foreign ministry announced Tuesday that the talks would be postponed, citing a request by the U.S. to push back the date for the dialogue, which had been scheduled for mid-October. However U.S. media reported earlier that China had initiated the delay.