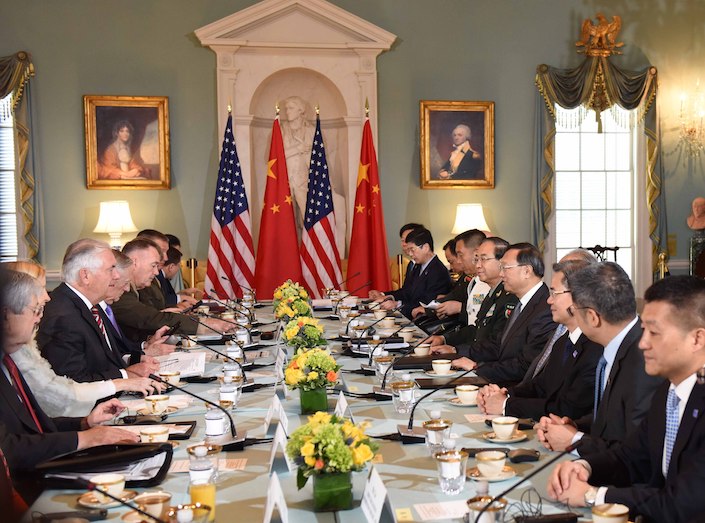 Representatives from China and the U.S. meet in June 2017 for the first U.S.–China Diplomatic and Security Dialogue, in Washington, D.C. Photo: VCG

China says the U.S. was responsible for postponing a scheduled security meeting between the two countries, denying reports that Beijing had initiated the delay.

“The claim that the Chinese side proposed to postpone the Second Round of China-U.S. Diplomatic and Security Dialogue distorts the facts and is out of ulterior motives and very irresponsible,” Hua Chunying, a spokesperson for China’s foreign ministry, said in a statement Wednesday.

Hua had announced Tuesday that the talks would be postponed, citing a request by the U.S. to push back the date for the dialogue, which had been scheduled for mid-October. But U.S. media reported earlier that China had initiated the delay.

The foreign ministry’s remarks come amid increasing diplomatic tension between the two countries, which have been engaged in a months-long trade war.

On Sunday, U.S. Navy ship USS Decatur and Chinese destroyer Lanzhou sailed within 45 yards (135 feet) of each other in the South China Sea. The U.S. Pacific Fleet’s spokesperson called the encounter “an unsafe and unprofessional maneuver” by the Lanzhou, according to Bloomberg. But China’s defense ministry said Tuesday that the Decatur had entered Chinese waters, and that the Lanzhou had approached the U.S. vessel in order to warn it to leave (link in Chinese).

The cancellation of the U.S.-China security dialogue comes just days after the two countries abandoned plans for trade talks. China and the U.S. have been locked in an escalating trade conflict that has seen both parties raise tariffs on hundreds of billions of dollars’ worth of products since July.