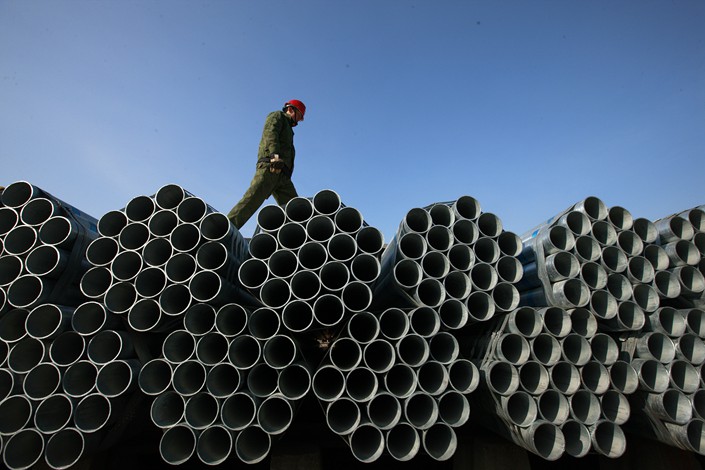 *China’s gross domestic product rose 6.5% in the July-September period, the weakest growth since the first quarter of 2009

*President Xi’s top economic adviser Liu He said the fundamentals of the Chinese economy remain healthy and blamed the ongoing stock market rout on external factors, including interest rate hikes in major economies elsewhere and concerns about trade frictions between the U.S. and China

(Beijing) — China’s economy grew at its slowest pace in nearly a decade in the third quarter, as top officials sent messages in a rarely seen coordinated manner Friday to stem a stock market selloff driven by worries over a deepening trade war with the U.S. and weakening domestic activity.

The country’s gross domestic product (GDP) rose 6.5% year-on-year in the July-September period, the weakest since the first quarter of 2009, when the global economy was in the depths of the financial crisis, according to data released by the National Bureau of Statistics (NBS).

Vice Premier Liu He, the top economic adviser to President Xi Jinping, said Friday that the world’s second-largest economy was still operating “in a reasonable range,” though he also acknowledged that it has temporarily “run into some difficulties.”

The government’s campaign to deleverage the financial sector and reduce excess capacity of some industries have borne fruit, with risky investments by institutions curbed and prices in sectors previously plagued with oversupply returning to normal, he said, amid expectations that policymakers will shift their priority to boosting growth.

“Next we will focus on beefing up the vitality, resilience and creativity of micro units in the economy to push for economic transformation and upgrading,” Liu said in an interview with the official Xinhua News Agency.

He added that the government will take measures to reduce burdens on private firms, broaden their access to financing, deepen the reform of state-owned enterprises to improve their competitiveness, and improve the financial sector’s ability to boost economic activity. Authorities will maintain an active fiscal policy and a prudent and neutral monetary policy, he said.

Liu’s comments came shortly after People’s Bank of China Governor Yi Gang, top banking and insurance regulator Guo Shuqing, and China Securities Regulatory Commission Chairman Liu Shiyu voiced support for the domestic stock market. The benchmark Shanghai Composite Index has lost about 30% from its recent peak in late January and tumbled to a near four-year low this week, making it one of the world’s worst performers of 2018.

Liu blamed the stock market rout primarily on external factors, including interest rate hikes in major economies elsewhere and concerns about trade frictions between the U.S. and China. He said the fundamentals of the Chinese economy remain healthy.

“The psychological impact is bigger than the actual impact. Currently, China and U.S. officials are in touch,” he said, apparently addressing pessimism that the bilateral trade dispute is unlikely to be solved any time soon given that negotiations between the two sides have stalled.

The casualty of confidence

Indeed, direct impact from the trade war on the Chinese economy has so far been limited as exports have held up. But the spat has undermined confidence, which has caused domestic demand to soften further, driving down GDP growth, analysts said.

“A moderation in 3Q GDP has been widely expected but the magnitude of the slowdown was beyond market expectations,” said Goldman Sachs economists in a report.

“The weakness in domestic demand may well have been affected indirectly by the trade dispute, which is increasingly viewed as a ‘cold war’ by some Chinese observers after the recent speech by U.S. Vice President Pence, as consumers and corporates delay their consumption and investment decisions amid heightened uncertainties,” they said.

The economists were referring to the attack by Donald Trump’s second in command earlier this month against Beijing on its economic and military practices. He also accused China of meddling in American democracy and elections.

Industrial output, which measures production at factories, mines and utilities, grew 5.8% year-on-year, the lowest figure since the 5.4% increase in the first two months of 2016, NBS figures showed.

Fixed-asset investment excluding rural households increased 5.4% in the first nine months of the year, edging up from an all-time low of 5.3% for the January-August period. It was still the second weakest rate since the cumulative growth data series was first released in February 1998. The NBS doesn’t provide investment data for individual months.

Sluggish infrastructure investment remained the main drag on fixed-asset investment, suggesting the effects of government efforts to speed up construction of projects such as roads and renovations of run-down urban areas have yet to take hold.

Infrastructure investment, which consists of spending on the construction of roads, railways and other public facilities excluding utilities, increased 3.3% year-on-year in the first nine months of the year, the worst since the NBS began recording the figures in April 2014.

Retail sales, which include spending by households, government departments and businesses, rose 9.2% last month from a year ago, the highest rate in five months.

But analysts have attributed the rebound to higher consumer inflation due to the shift of the Mid-Autumn Festival to September this year from October last year. They are unconvinced the strength of consumption will continue. As evidence, they pointed to rapidly contracting car sales.

“The auto sector is a large sector both in China as well as globally. Globally it is often seen as an indicator for consumer sentiment,” said Julia Wang with HSBC Global Research in a note.

She called for more tax breaks for companies. “Further fiscal policy easing, particularly in the form of tax cuts will be useful towards anchoring corporate expectations,” she wrote.

NBS data showed that GDP expanded 6.7% year-on-year in the first nine months of the year. The Chinese government in March set a growth target of “around 6.5%” for this year.