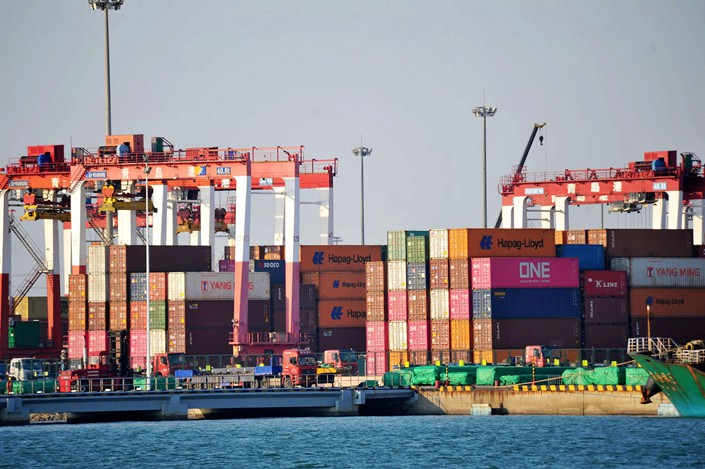 China is facing a coming decline in the value of its machinery, electronics and bathroom fixture exports as the effects of China-U.S. trade war are set to take hold, a new industry group report said.

Now that Washington has imposed additional tariffs on a total of $250 billion in Chinese products — accounting for roughly half of China’s annual exports to the U.S. — machinery and electronics companies are beginning to feel the pressure. The additional U.S. tariffs cover two-thirds of China’s exports of mechanical and electronic goods to the United States, according to a report released by the China Chamber of Commerce for the Import and Export of Machinery and Electronic Products.

Based on last year’s trade volumes, this means that 10% of China’s total exports of machinery and electronics will be hit by the additional U.S. taxes, the report found.

Machinery and electronics have long accounted for a large portion of China’s exports. In the first nine months of this year, China exported $1.06 trillion of such goods, which accounted for 58.2% of total goods exports, according to recent data from China’s General Administration of Customs.

Although machinery and electronics exports grew 13.5% year-on-year in the first three quarters, the customs figures have to yet to reflect the effects of the trade war as the additional tariffs took effect in July and August. The industry still faces increasing uncertainty, the report said.

One senior researcher at the Chinese Academy of Social Sciences, who declined to be named, suggested that companies try to circumvent the tariffs. “In the short term, it might be a good practice for the electromechanical industry to find a cooperative company abroad or re-export through Hong Kong or Singapore,” the researcher said. “The firms could also consider finding ways to manufacture similar products which use the same technology, but that are not on the tariff lists.”

Some companies are seeking new customers in markets other than the U.S., but that strategy face challenges. “The markets are not as large, and it’s hard to land businesses in a short period of time,” the researcher said.

China’s bathroom wares industry has also struggled. Huida, a leading Chinese manufacturer of products used to outfit bathrooms, suffered a sharp drop in revenue from exports. For the first half of this year, the company’s export revenue tumbled nearly 13% year-on-year to 373 million yuan ($53.86 million), according to its semiannual report.

“We’ve lost a lot of overseas orders, and other companies in the industry are looking for ways to minimize the losses,” Huida CEO Wang Yanqing said Monday at the China Import and Export Fair in Guangzhou, South China’s Guangdong province.

The real impact of the trade war, however, won’t likely become apparent until later this year. “The impact of U.S. tariffs on Chinese exports could show as early as October, and the main pressure will be reflected in the export volume in the first quarter of next year,” Hua Chuang Securities said in a recent research report.

As for the trade war itself, there has been no sign of any improvement in China-U.S. relations.

In September, the Trump administration announced an additional 10% tariff on $200 billion in Chinese imports. Those tariffs came on top an additional 25% duty on $50 billion worth of Chinese imports that U.S. President Donald Trump imposed in July. These levies now cover roughly half of China’s shipments to the U.S. last year.

China has said it will retaliate against the latest levies by taxing $60 billion of U.S. goods, including liquefied natural gas and aircraft. That will put more than 85% of last year’s U.S. exports to China under punitive tariffs.