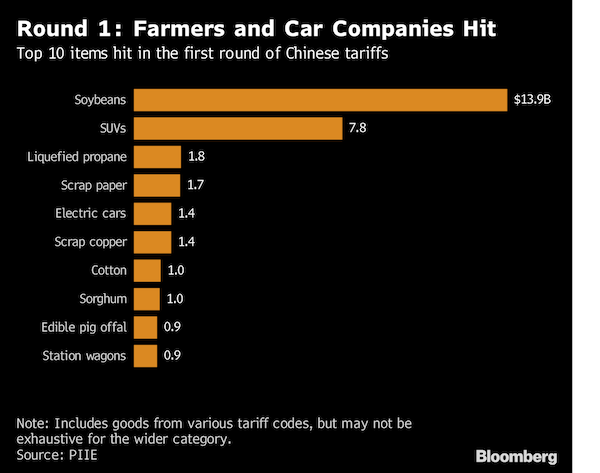 (Bloomberg) — The U.S. and China are hours away from a new round of tariffs on each other’s goods, with no improvement in relations between the two rivals in sight.

In a significant escalation, $200 billion of Chinese products will be subject to increased tariffs from 12:00 p.m. Beijing time on Monday, on top of the $50 billion in goods already charged higher duties earlier in the year. The combined $250 billion in products facing levies is almost half the value of imports from China last year.

Meanwhile, $60 billion of goods from the U.S. will become subject to Chinese higher tariffs around the same time, adding to the $50 billion already levied. That’ll mean about 70 percent of the value of goods China bought from America in 2017 face tariffs.

China on Saturday called off planned trade talks with U.S. officials amid the escalation from the Trump administration. The U.S. State Department’s sanctions against China’s defense agency and its director on Thursday also contributed to the decision, according to people familiar with the situation. There’s a growing consensus in Beijing that substantive talks will only be possible after U.S. mid-term elections in November, the people said.

“President Trump has an excellent relationship with President Xi and our teams have been in frequent communication since President Trump took office,” Lindsay Walters, deputy White House press secretary, said in an emailed statement. “We remain open to continuing discussions with China, but China must meaningfully engage on the unfair trading practices.”

Attention will shortly focus on whether President Trump will follow up with yet more tariffs covering $267 billion of Chinese goods in the meantime, as he threatened to do if China retaliated to his $200 billion salvo. That would effectively cover all the products that the U.S. imports from China, again ratcheting up a conflict that could undermine the global expansion and upend the supply chains of many multinational companies.

“We don’t want to, but we probably will have no choice,” Trump said of the tariff escalation at the Oval Office. “We’re making a lot of headway with China.”

U.S. Secretary of State Michael Pompeo said Sunday that Trump isn’t starting a trade war with China, but joining one already under way. “The trade war by China against the United States has been going on for years,” Pompeo said on Fox News. “To the extent one wants to call this a trade war, we are determined to win it.”

The following analysis shows in charts how the tariff war has developed and what could still be to come.

The U.S. products that China has targeted for retaliation have changed over time, shifting from cars and agricultural commodities to industrial goods.

See here for full list of all goods China will tariff

In the initial round, soybeans and most of China’s imports of U.S. cars were hit.

In the second round, the focus has widened and shifted more to capital goods and other imports, raising the cost for industrial companies. That’s partly because many of the goods traded in large volumes with the U.S. were already covered by the first round, so it’s getting harder to find things on which to impose new tariffs.

That can be seen in the number of goods affected. In round one there were 659 U.S. imports hit with the added 25 percent tariff, while this time there are 5,207 individual items on which China plans to impose a 5 percent or 10 percent levy.

But there are still tens of billions of dollars of U.S. goods that haven’t been hit with extra import taxes yet -- many in areas where China is unable to compete with western countries, such as planes, computer chips, and pharmaceuticals.

If there’s continued escalation, what happens with those goods, which China has to import from somewhere, will be closely watched. Even as companies like aircraft maker Boeing Co. bank on the growing Chinese market, tariffs, or the threat of them, could cause Chinese companies and consumers to spend less on U.S. goods and more on substitutes from home, Japan, the European Union, or elsewhere.

There are already signs of that happening in energy markets. This round of tariffs will include levies on U.S. liquefied natural gas, and that’s possibly caused one ship to change course from China to South Korea to avoid the penalty.

In the U.S., companies complain that the time frame between the announcement of tariffs and their implementation of the tariffs on thousands of products is too short to arrange alternatives. And a protracted trade war will fuel inflation in the U.S., particularly as tariffs are added to categories such as furniture, apparel and technology, according to analysts at Bloomberg Intelligence.

In China, producers are already under stress even ahead of implementation of U.S. tariffs, as indicated by an explosion in corporate borrowing that isn’t being captured by official government statistics, according to the China Beige Book.

Manufacturing’s “multi-year rally has given way to declining revenue and sharply declining profit growth,” CBB International said in a report published Monday. “Critically, manufacturing’s plight is occurring before any meaningful American tariffs have been imposed. Absent a fall trade deal, this situation will likely deteriorate.”

Amid the onset of economic damage for both economies, state newspaper China Daily reached into the U.S. heartland in an advertising supplement in Iowa’s largest newspaper to highlight the impact on the state’s soybean farmers as “the fruit of a president’s folly.’’

The four-page section in Sunday’s Des Moines Register, which carried the label “paid for and prepared solely by China Daily, an official publication of the People’s Republic of China,” featured articles including one outlining how the trade dispute is forcing Chinese importers to turn to South America instead of the U.S. for soybeans.