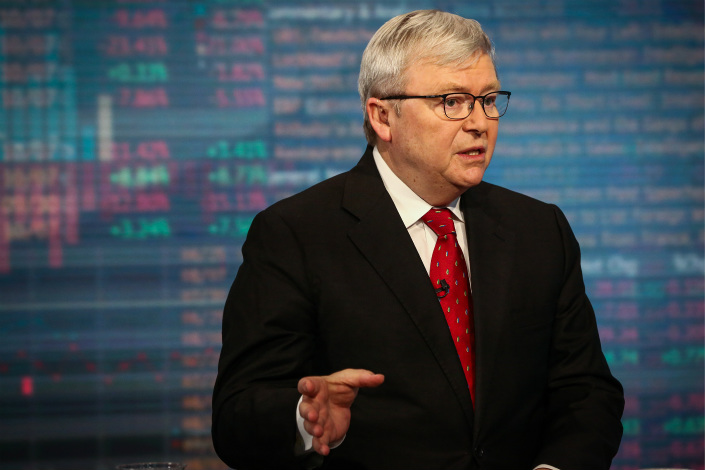 Editor’s note: Kevin Rudd, former prime minister of Australia, has been studying China for decades. The Mandarin-fluent former diplomat completed a research project into U.S.-China relations at Harvard University in 2014 and is now working on a Ph.D. at Oxford University on the worldview of Chinese President Xi Jinping.

(AFR) — Kevin Rudd has issued a stark warning to Washington that Beijing won't buckle under the worsening U.S.-China trade clash, which the former prime minister described as a “slippery slope” towards a cold war that could one day descend into a military conflict.

In an interview with The Australian Financial Review on Tuesday, Rudd said the Trump administration’s demands for change in China have escalated to a point where they can no longer be easily resolved.

While the actions of the U.S. president — who this week followed through on his long-telegraphed threat to slap tariffs on $200 billion of Chinese imports to the U.S. — have blown the whistle on China’s unfair “mercantilist” and predatory approach to trade, the administration’s ever-changing demands and internal strife mean Beijing cannot concede ground without a politically dangerous loss of face at home.

"The Chinese know something has to give — big time — in their position on trade and investment rules,” Rudd said, begging answers to “how much, in what form, and by when?”

“Secondly, the problem the Chinese have is they have no idea what the administration’s fundamental position is.”

Signs of divisions within the White House on how to prosecute the trade war have been apparent for more than a year. Since April, there has been a shift, coinciding with the departure of the president’s then-top economic adviser, Gary Cohn, a former Goldman Sachs investment banker and staunch internationalist on trade.

Until that point, the Chinese understood the dispute with Trump as purely a contest over what to do about America’s $375 billion bilateral trade deficit, with talk of agreeing to a solution that would narrow that deficit in several steps over time.

However the dispute has morphed into a broader “trade investment plus” fight, Rudd said, which now includes the deficit issue plus demands for changes on investment rules, advanced technology transfers and intellectual property rights.

“So the levels of complexity from a Chinese negotiating perspective are massive,” said Rudd, who believes there is almost no chance of an effective resolution before the U.S. midterm elections in early November.

“The Chinese want to know who they’re dealing with after the midterms; will the president be weaker or stronger? Will he make changes to the administration? And what will be the composition of Congress?”

The White House on Tuesday didn’t respond to Adamson’s criticism.

However a source with close links to the Trump administration told the Australian Financial Review the White House was unlikely to be swayed by such criticism.

“The one thing that unites everyone in Washington is taking on China — whether it’s the Democrats or the Republicans.

“The sole defender of China is Wall Street.”

‘This will get a lot worse’

Even there, sentiment has swung away from concern about the deteriorating tit-for-tat dispute, with the benchmark Dow Jones index rising 200 points in New York on Tuesday.

Many have attributed the rebound in stock prices to a lower-than-expected tariff of 10%.

“While this is true, there’s also a bigger issue out there. Markets believe that the tit-for-tat will ultimately result in a still free but fairer system,” wrote prominent investor Mohamed A. El-Erian in a tweet.

Rudd, who is president of the Asia Society Policy Institute in New York, where he lives, warned the first “substantive efforts” to find a resolution won’t take place until the end of the year — which will coincide with the Jan. 1 deadline when Trump’s latest tariff rate ratchets up to 25%.

“In my judgment, we have a long way to go yet, and I think the Chinese view is that this will get a lot worse before it gets better.”

Asked how resilient China is to Trump’s efforts to squeeze a deal out of Beijing, Rudd said while Chinese business confidence was being negatively affected by the trade dispute, the government is well-prepared.

“If you look at the monetary and fiscal policy measures embraced by the Chinese government in the last several months, they know there’s an effect coming.

“But what people underestimate the significance of in Washington, is that the Chinese have politics too; it’s not just a Western political reality.

“The whole notion of backing down — or being seen to back down within Chinese politics to U.S. pressure — is almost as politically unsaleable in Beijing as it is in the Trump heartland,” he said.

Chinese far from desperate for a resolution

The real challenge, or “diplomatic craft” required, involves finding a mechanism and outcome that can save “face” for both countries, he said.

“So the bottom line: China wants this dispute resolved as quickly as possible but it is a misreading to assume the Chinese are politically desperate to resolve it.

“This is compounded by two factors. How far the U.S. administration now expects them to go, and also domestic critique within China if China is seen to lose face in the final landing point.”

Rudd’s remarks come after he delivered an alarming speech in California last week in which he warned that 2018 is shaping up as a watershed year in which the world is set on a course toward another big-power war.

It starts as a “trade war” that “metastasises” into a technology war that will either drive or destroy the economies of the 21st century, he said.

“It is an open question if and when this will begin to fuse into another ‘Cold War,’ let alone if and when the unpredictable forces now being unleashed by this rapidly unfolding new economic war erupt into one form or other of military confrontation in the future.

“Until relatively recently, this sort of language was almost unthinkable in mainstream public policy. The problem now is that it has entered the realm of the thinkable. ... Nobody is any longer confident where all this will land.”

This article was originally published by the Australian Financial Review.