What Human Hair, Apple Watches Tell Us About Trump’s Tariffs

By Ke Baili and Charlotte Yang 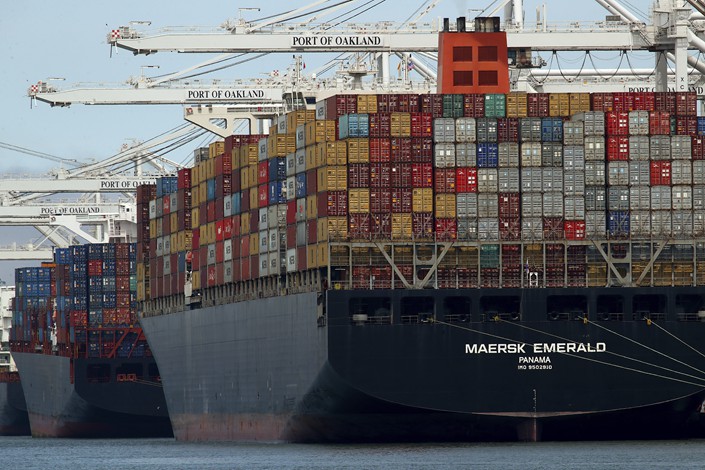 The container ship Maersk Emerald is unloaded at the Port of Oakland on July 12 in Oakland, California. Photo: IC

* Most-recognizable products that the U.S. spared in latest tariff hikes are made by Apple Inc., including Apple Watches and AirPods headphones

* Attempting to protect consumers and businesses from the effects of the trade war will get much harder as new rounds of tariffs are imposed, experts say

(Beijing) — By Monday, a last-minute cease-fire in the trade war notwithstanding, about half of China’s exports to the U.S. and 85% of U.S. exports to China will be subject to punitive tariffs.

The final U.S. list removed nearly 300 tariff lines from the originally proposed list. These choices give a sense of the Trump administration’s strategic priorities in the next phase of the trade war — and which Chinese products it really cannot do without. While the U.S is trying to crank up the pressure without squeezing its own consumers and businesses, the room to do so is shrinking.

An additional 10% tariff on another batch of $200 billion of Chinese imports will take effect on Sept. 24, with the rate rising to 25% in 2019, according to a statement published by the White House late Monday. China has said it will retaliate by taxing $60 billion of U.S. goods at additional rates of 5% or 10%, also effective Sept. 24. The new U.S. tariffs will come on top of 25% duties on $50 billion of Chinese imports that U.S. President Donald Trump has imposed since July.

The most-recognizable products that were spared are made by Apple Inc., including Apple Watches and AirPods headphones. “We know that causing a spike in consumer electronics prices ahead of Black Friday and the Christmas shopping season is something (U.S.) policymakers want to avoid, and thus, they removed a large amount of consumer products from the tariff lists,” said Hannah Anderson, global market strategist, J.P. Morgan Asset Management. Black Friday — the day after the U.S. Thanksgiving holiday, which is the fourth Thursday in November — is a major shopping day in the country.

Of the 20 tariff codes that Apple had asked to be removed, 17 remain unchanged on the final list. Tariffs covering Apple chargers, Apple adapters, and the leather covers for iPhones will be among the items hit by the new levies on Sept. 24.

China’s latest tariff list, which has several different rates ranging from 5% to 10%, also shows the country’s attempt to protect its consumers, Anderson said. “Lower tariffs will be applied to goods where the higher costs are more likely to quickly get passed along to the consumer.”

Over a third of the 300-odd tariff lines spared from tariffs covered chemicals, with the official statement saying they were used as inputs for manufactured goods, textiles and agriculture. “For many of the chemical, mining, and electronic products, there is simply no substitute for Chinese imports. Additional tariffs on these products effectively means pushing many U.S. manufacturers out of business,” said Bo Zhengyuan, an analyst at GRisk, a political risk analytics firm.

Hundreds more chemicals remain on the final tariff list, however. “There is no acceptable tariff rate for global chemicals trade with China or any U.S. trading partner,” American Chemical Society CEO Cal Dooley said in a statement after the final list was released.

Other more-surprising saves include human hair — of which China supplies nearly half of U.S. imports — bicycle helmets, children’s car seats, playpens, and antiques.

Attempting to protect consumers and businesses from the effects of the trade war will get much harder as new rounds of tariffs are imposed. GRisk’s Bo sees the tensions as a “game of chicken,” as both sides attempt to avoid the political damage associated with not hitting back at the other. In the Monday statement announcing additional tariffs, Trump warned that if Beijing retaliated, he would “immediately pursue phase three,” which would involve levies on $267 billion more of Chinese products. That would extend duties to the value of China’s entire annual exports to the U.S.

The kind of compromises seen so far might be thrown out of the window, said Tu Xinquan, dean at the China Institute for World Trade Organization Studies. “Given how determined Trump has become, it is possible that he will impose tariffs on all Chinese imports. In this round’s $200 billion worth of Chinese imports, there were already some products where the U.S. gets 100% of its imports from China,” Tu said.

China has even less room to maneuver in future trade bouts — its trade surplus with the U.S. means that the country is unable to respond with tariffs on equal amounts of imports. “The next step for China will be to continue imposing restrictions — quantitative and larger in impact, qualitative — on U.S. business operations in China,” Anderson said. According to the latest survey of companies by the American Chamber of Commerce in China, 52.1% of companies have noticed a negative change in the treatment of their companies by Chinese authorities after these trade tensions began to ramp up, she said.

China’s attempts to open up its market to foreign investors will make this kind of qualitative attack unlikely though, Bo said. “This has been a long term strategy for the Chinese government, and it is too costly for the country to reverse it by pressuring foreign companies in China. So in this case, China will compete by setting a positive example,” Bo said.