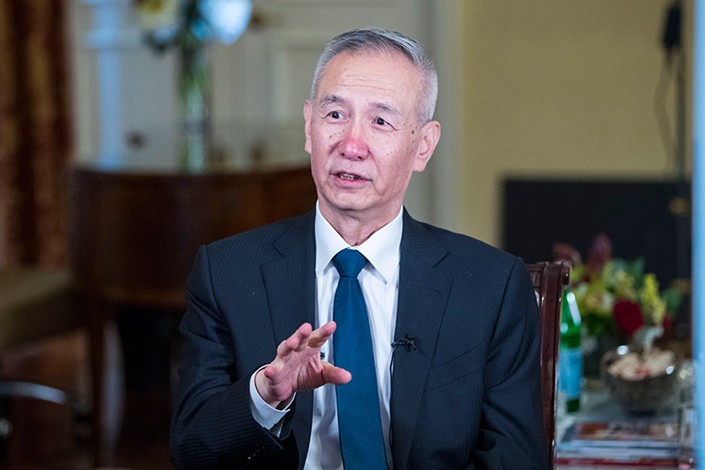 *President Xi’s top economic adviser and the heads of the securities regulator, the combined insurance and banking watchdog and the central bank all released statements urging investors to stay calm as the country’s main stock market neared a four-year low

*Liu He, the economic adviser, urged policymakers to “move fast” and “act big” to support the stock market’s development, and highlighted support for private companies that have suffered the most in the recent share dumping

(Beijing) — China stocks staged a major rally Friday afternoon after Vice Premier Liu He and three other top financial regulators moved in a concerted manner to support the stock market, in a rare move to ease the nerves of jittery investors in the current bear market.

The high-profile efforts offset weaker-than expected third-quarter economic data and helped shares surge in the afternoon. The Shanghai Composite Index jumped by 2.58% at Friday close, rebounding back above the key level of 2,500, after initially slumping more than 1% during the morning session. The smaller tech-heavy Shenzhen Component Index was up by 2.79%.

Liu, the top economic adviser to President Xi Jinping, said in an interview on Friday that the government “highly values” the smooth and healthy development of the stock market, and is rolling out “targeted measures” to stabilize the market and support market reform. He said trade frictions between China and the U.S. have had an impact on the stock market, but “the psychological effect is bigger than the actual impact.”

China’s stock market officially entered bear territory in June on growing concerns of prolonged trade frictions with the U.S. and anticipation of slowing economic growth. Pressure from a number of stocks that were pledged as loan collateral being sold due to slumping prices has also created a vicious cycle that has led to even more share sales.

At current levels, the Shanghai Composite Index, the worst performer among global benchmarks this year, is down about 30% from a peak in late January. It has lost 9.6% of its value during the past two weeks and is hovering around four year lows.

Liu He urged policymakers to “move fast” and “act big” on specific measures to support the stock market’s development, and highlighted support for private companies that have suffered the most in the recent share dumping.

“Those who do not support the development of private enterprises under the name of personal interests have great problems in (their) political stands, and their behaviors must be firmly corrected,” Liu said.

In line with those remarks, the banking and insurance regulator also released a highly anticipated draft regulation (link in Chinese) on banks’ wealth management units on Friday. The proposed regulation would relax the use of banking funds for investment in the stock market, and give such funds the same access to stocks as mutual funds and private equity funds.

Cinda Securities analyst Gu Yongtao said investors should not expect direct fund injections from the government, based on the latest high-profile remarks. “The government is aiming more at stabilizing business operations,” he said.

As pressures linger and confidence remains low, signs are growing that local governments have already started to bail out listed companies.

The local government in the southern boomtown of Shenzhen is planning to inject at least 15 billion yuan ($2.16 billion) into nearly 30 local listed companies, Caixin previously reported. Shunde, a manufacturing hub near Shenzhen, and Beijing’s Haidian district, where many technology companies are located, are also considering similar plans.