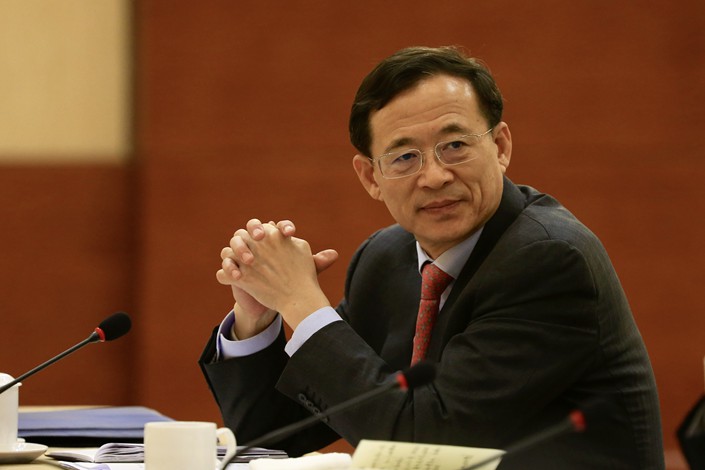 *An analyst told Caixin that investor confidence will take time to recover, especially in the face of recently released data which renewed concerns over the country’s economy

(Beijing) — Domestic stock markets on Monday disregarded the securities regulator’s pledge to protect the interests of small and midsize investors, with the two major stock indexes falling to near-four-year lows.

The drops followed a statement from the head of the China Securities Regulatory Commission (CSRC) over the weekend that aimed to reassure investors. CSRC Chairman Liu Shiyu said (link in Chinese) at a panel in Beijing on Sunday that the commission would protect the rights of hundreds of millions of small to midsize investors.

Liu made the pledge in response to investors’ calls for the government to boost market confidence in wake of last week’s stock sell-off.

Chinese mainland stock markets suffered their biggest drop in two-and-half years on Thursday when the Shanghai and Shenzhen indexes both fell more than 5% following a 3.29% plunge in the U.S. stock benchmark on Wednesday.

Sinolink Securities analyst Huang Cendong said it will take time for investors to regain their confidence as recently released data renewed concerns about the fundamentals of China’s economy.

Data on consumer spending over last week’s National Day holiday did not bode well for the next two quarters, Huang told Caixin.

During this year’s National Day holiday, the growth of average daily sales in the retail and catering industries grew 9.5% year-on-year, the lowest since 2013, according to data released by the Ministry of Commerce. The growth rates have fallen each year for the last five years.

China’s import data provided another sign of weakening domestic demand. Last month, growth in imports slowed to 14.3% year-on-year from a rate of 19.9% in August and 26.9% in July.

To support buybacks and strengthen investor confidence, the Shenzhen Stock Exchange promised on Friday to more closely scrutinize the buyback information that companies submitted to the exchange, according to a statement (link in Chinese) released by the exchange.

The move aimed to curtail false buyback announcements that can mislead investors and increase market uncertainty, the release said.

As of Thursday, more than 756 mainland-listed companies had announced stock buybacks, with many citing market volatility in their buyback announcements.

The companies have completed 548 buybacks worth 28.7 billion yuan. The total exceeded the value of all stock buybacks in the years 2015, 2016 and 2017 combined.