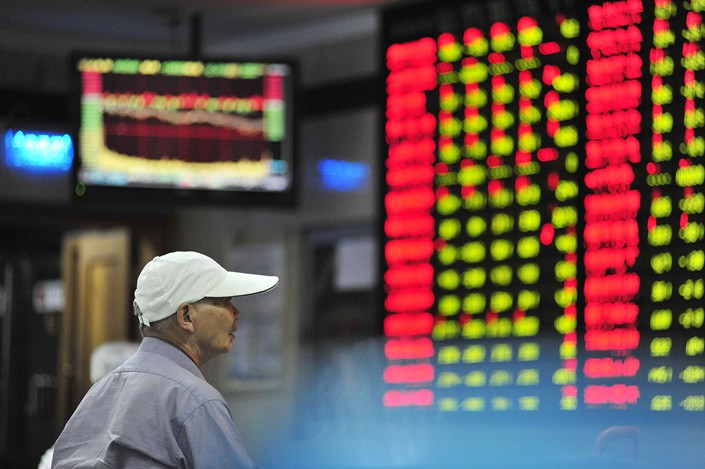 *As of Monday, 112 of the over 280 Shenzhen-based listed companies had more than 20% of their shares pledged as collateral for loans

(Shanghai) — Shenzhen’s government is preparing to inject at least 15 billion of yuan into nearly 30 local listed companies to defuse the risk of share dumping as the country’s stock markets continue to fall, Caixin has learned.

The rescue plan, which is led by a special team formed by 10 Shenzhen city government departments, comes as companies are increasingly dumping their shares to repay share-backed loans, or margin calls.

The benchmark Shanghai Composite Index and the smaller, tech-heavy Shenzhen Component Index flirted with four-year lows due to an ongoing trade war with the U.S. and deteriorating confidence in China’s economic outlook. Repeated margin calls are generally believed to further drive down share prices.

The special team, which includes members of the city’s Economic, Trade and Information Commission, State-Owned Assets Supervision and Administration Commission and Financial Office, is headed by Shenzhen’s vice mayor, a source close to the team told Caixin.

The team will prepare 5 billion yuan ($722 million) in targeted funds for Shenzhen Kunpeng Equity Investment Management Co. Ltd. and another batch of 10 billion yuan targeted funds for Shenzhen High-Tech Investment Group Co. Ltd. to execute the plan, according to an executive from one Shenzhen-based company who was picked to receive rescue funds. He declined to be named.

The executive also said there would be more companies beyond the first batch of nearly 30 to be rescued, and a detailed rescue plan is still under review. “I believe we won’t wait for too long (to see the funds distributed),” he said.

According to a report by the Shanghai Securities News on Saturday, one likely rescue path is to let Kunpeng Equity purchase the stock of companies in need of rescue, and let Shenzhen High-Tech Investment or entities such as Shenzhen Small & Medium Enterprises Credit Financing Guarantee Group Co. Ltd. help out those companies by providing loans.

Shenzhen High-Tech Investment told Caixin on Monday that a drafted rescue plan does exist, but it declined to comment further as the plan hasn’t been finalized. As of Monday, Shenzhen’s Economic, Trade and Information Commission, State-Owned Assets Supervision and Administration Commission and Financial Office haven’t responded to Caixin’s requests for comment.

As of Monday, 112 of the over 280 Shenzhen-based listed companies had more than 20% of their shares pledged as collateral for loans, according to financial data provider Hithink RoyalFlush Info.

It’s not clear how the special team will assess the qualifications of companies to receive the rescue funds. But clues are emerging that the plan has been going on for a while.

Engineering company Shenzhen Techand Ecology & Environment Co. Ltd. said in a statement on Friday that it had applied for some 50 million yuan in entrusted loans from Shenzhen High-Tech Investment to shore up its liquidity. Trading of Shenzhen Techand Ecology & Environment remained suspended on Tuesday due to an upcoming plan to introduce state-owned investors.

Several other Shenzhen-based companies, including home appliance component manufacturer Shenzhen Yitoa Intelligent Control Co. Ltd., also said they have applied for rescue funds and are waiting on a decision from the special rescue team, Caixin has learned.

Industry insiders said the government has good intentions with the plan, but a source inside the State-Owned Assets Supervision and Administration Commission expressed concerns about it being only a short-term solution.

“It might be a short-term incentive, but it’s hard to keep up in the long term,” the source said.