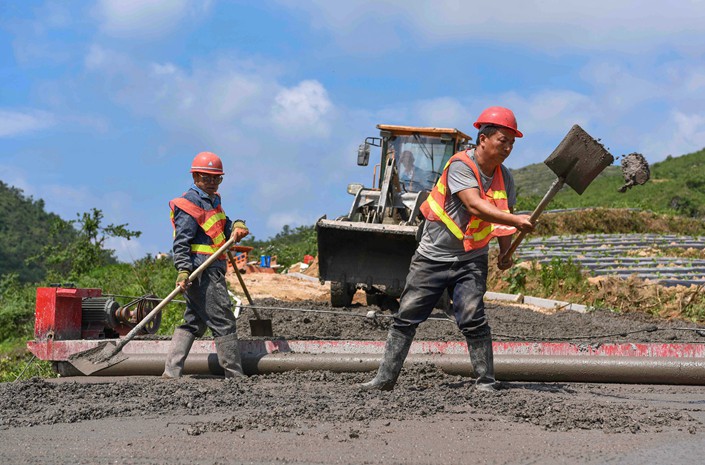 Workers build a road in Southwest China’s Guizhou province on May 14. Photo: VCG

* Investment was declining amid a nationwide campaign to control debt

China’s local authorities are picking up the pace of infrastructure construction to bolster the economy after the central government shifted policies to encourage more growth.

Several provincial governments unveiled plans to resume delayed projects or accelerate construction of new ones in a bid to stimulate local investment and address concerns over cooling economic growth amid the trade war with the United States. The provincial and regional authorities include the Ningxia Hui autonomous region and Hebei, Anhui and Heilongjiang provinces.

The moves followed policy shifts by the central government starting in July to stimulate spending and ease credit to spur growth.

Increasing government investment is the most immediate way to fuel economic growth, said Zhang Deyong, a financial analyst at the Chinese Academy of Social Sciences. Local governments should take into account their specific economic conditions to work out targeted policies, Zhang said.

The government of Ningxia Zhuang Autonomous Region in the northwest recently issued a notice requiring all construction plans for 2019 to be completed on time and work to resume by September on projects that have been delayed since last year.

Ningxia posted a 20% decline in fixed-asset investment this year from a year ago because of postponed projects. According to the regional government, 33 Ningxia investment projects from 2017 are less than halfway finished. This year, 62 planned projects have yet to commence.

The Ningxia government in the notice said all construction projects planned for this year should be started by the end of September.

Authorities of northern China’s Hebei and the central province of Anhui issued similar policies requiring acceleration of local construction projects. The Hebei government said all key projects planned for the year should be completed by the end of November and preparations should be made as early as possible for projects scheduled for next year.

The Hebei provincial government set a target for annual fixed-asset investment growth of 6%, up from 5.6% for the first eight months. The government pledged measures to improve the business environment and support private investment.

Anhui moved a step further by requiring projects scheduled for the first half of 2019 to start construction this year. The provincial government listed projects including railway, highway, airport, water and energy facilities as major investment areas.

The central government since late July shifted to a more pro-growth stance after several months of slowing investment that analysts said resulted from greater restrictions on opaque and illicit local government borrowing and a nationwide campaign to control debt.

Data from the National Bureau of Statistics showed that infrastructure spending growth fell to a record low of 4.2% year-on-year from January to August.

In July, the National Development and Reform Commission announced approvals of new infrastructure projects worth a combined 77.69 billion yuan. Local authorities were told to “speed up” the issuance of special-purpose bonds to fund infrastructure construction.

The top banking and insurance regulator also encouraged banks to lend more. Earlier this month, the central bank cut the amount of cash lenders must set aside as reserves for the fourth time this year, freeing around 1.2 trillion yuan of liquidity into the banking system.

The spending push and credit easing fueled concerns over a further buildup of local government borrowing, which is seen as a major risk for China’s economy. But regulators reiterated that the tough stance on debt control will remain unchanged.

In a earlier press conference, Cong Liang, secretary general of the NDRC, said that speeding up bond sales to raise money for construction projects meant they will start generating income earlier, thereby helping to bring down the debt ratio.

Several financial institutions said in research reports that they don’t expect to see another infrastructure boom like the one fueled by the 4 trillion yuan stimulus after the 2009 financial crisis because of the tight oversight of government borrowing. The current spending push is mainly aimed at stabilizing the economy rather than driving fast growth, the reports said.

Anhui government said in its policy notice that it will tap special purpose bonds and partner with private capital to fund construction to avoid adding extra debt to its books.