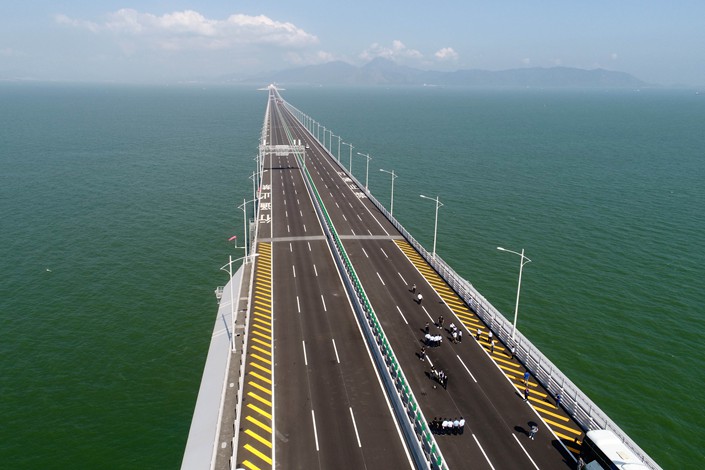 A view of the Hong Kong-Zhuhai-Macao bridge, which was completed in April. Photo: VCG

(Beijing) —Growth in government-driven infrastructure investment slipped to a record low in August despite a recent policy move to boost fiscal spending.

Year-on-year growth in infrastructure investment, which consists of spending on the construction of roads, railways and other public facilities, slowed to 4.2% for the first eight months of 2018 from 5.7% growth for the first seven months, according to data released Friday by the National Bureau of Statistics (NBS). This reading marked the slowest growth in available data going back to March 2014.

Infrastructure investment momentum seems to have stayed weak, as recent efforts to support it have yet to show an effect, said Louis Kuijs, head of Asia economics at research firm Oxford Economics, in a note.

Amid slowing domestic growth, local governments have heeded the Ministry of Finance’s call to accelerate bond issuances, issuing 883 billion yuan ($129 billion) worth of bonds in August, up 88% year-on-year and 17% month-on-month, according to Caixin calculations based on government data.

“Given the recent accelerated local government bond issuances, we expect infrastructure investment to stabilize in (a) couple of months,” said Larry Hu and Irene Wu, analysts with Macquarie Capital Ltd., in a note.

The property sector, especially in third- and fourth-tier cities, has been the most important driver for China’s economy so far this year, said Hu and Wu.

But the property boom in smaller cities may not last as the government has tightened control over its shantytown redevelopment program, a major driver of demand, economists said.

Net pledged supplementary lending, the funding the central bank offers to support shantytown redevelopment projects, dropped to 9.1 billion yuan in August, the lowest level in 18 months, according to data from the central bank.

“The property market remains strong but is likely to have passed the inflection point,” Hu and Wu said.

Value-added industrial output, which measures production at factories, mines and utilities, rose 6.1% year-on-year in August, up from 6% the month before, NBS data showed.

The resilient industrial output figure could be a bit misleading because of its bias toward large enterprises, as smaller firms have continued to struggle with tight credit and rising costs, said Hu and Wu.

Retail sales, which include spending by governments, businesses and households, increased 9% year-on-year last month, up from 8.8% in July.

Generally speaking, “we still expect growth to be challenged in the coming months by the slow credit growth and the trade conflict with the U.S.,” Kuijs said.

Amid the trade tensions, China’s policymakers have eased the macro stance and indicated a readiness to ease further if growth slows sharply, he said. However, it is unlikely that there will be a major shift toward significant stimulus in the coming months.