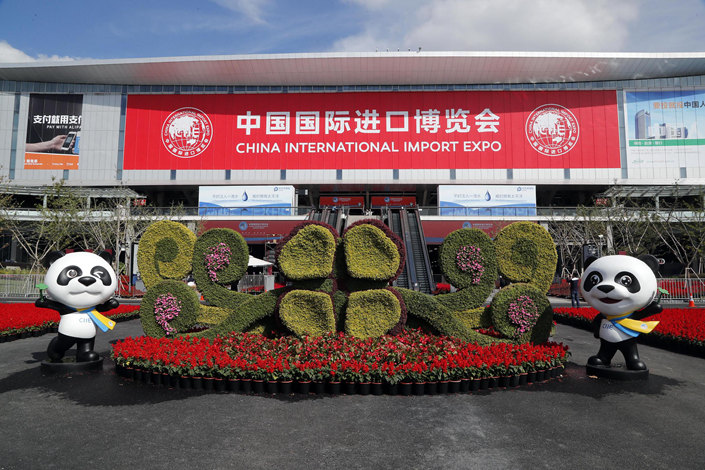 Foreign companies and business groups will be parsing every word of President Xi Jinping’s speech at a high-profile trade fair on Monday for hints about whether China will take to further steps to liberalize its markets.

The week-long fair in Shanghai, called the China International Import Expo (CIIE), arrives with political overtones, as it was Xi who first announced it at the Belt and Road forum a year ago. Since then, it has been billed as a “key approach to show China’s firm support for free trade, economic globalization and market liberalization,” according to public notices from the Ministry of Commerce.

In a phone call with U.S. President Donald Trump — something that hasn’t occurred since May 9 as trade frictions have intensified — Xi brought up the CIIE as evidence that China is willing to import more and further open up its markets, according to a report by the official Xinhua News Agency.

Because the official narrative highlights China’s role as a bulwark against rising trade protectionism and the political heft behind the CIIE, expectations have grown that Xi’s remarks on the first day of the trade fair will address foreign businesses’ long-running demands of greater market access.

Among foreign businesspeople, views are split over whether Xi will announce major policy changes. Some believe there won’t be any big news because policymakers will be waiting to see the results of the U.S. midterm elections on Tuesday. However, others assume the speech will likely mention some of the long-running demands of foreign businesses, such as further easing of foreign ownership rules, improvements to intelligence property right (IPR) enforcement, and the opportunity for global companies to become a part of China’s state-led industrial policy that has been dubbed Made in China 2025.

“It is important that Xi make some significant announcements if China wants the CIIE to be a success,” AmCham Shanghai President Kenneth Jarrett told Caixin. “Purchasing more goods and services from overseas is welcome, but that is a one-off step. It is only market liberalization measures that will turn CIIE into an event with lasting consequences.”

Jarrett said that members of his organization would also like to see more markets opened up, especially in professional services like legal services, education and health care, as well as online services such as cloud computing.

In a rare move, Jean-Maurice Ripert, France’s ambassador to China, and Dr. Clemens von Goetze, Germany’s ambassador to China, called for a “holistic reform agenda” from the government to increase international investment and resolve the existing challenges. Their proposals included the introduction of quicker and more scientifically-based procedures for agricultural product imports, and taking a major step to abolish joint venture requirements for foreign companies across all sectors.

“We’ve already seen a number of promising steps like the gradual lifting of equity requirements in the automotive and finance industries and a substantial reduction of import duties. But more needs to be done,” Ripert and Goetze wrote in a commentary exclusively for Caixin on Thursday. “European businesses should have the same opportunities in China as Chinese industries enjoy in Europe.”

As the world’s largest exporter, China has been facing growing challenges to its economic outlook and structural reforms, especially after Trump made rolling back its $423 billion trade surplus in goods a key demand in trade negotiations between the two countries.

Besides lowering tariffs on goods from countries other than the U.S. to reduce its overall trade surplus, China has also pledged to spend $10 trillion more on imports over the next five years. Its goal is to present itself as a large importer. However, the lion’s share of its imports have come from a narrow range of industries.

Of the $1.8 trillion China spent on imports in 2017, about 46.4% went to electronics and machinery, according to data from the Ministry of Commerce. Its next biggest imports were of crude oil and agricultural products.

By naming the fair without adding specific import categories, China is promoting itself as a growing buyer not only of merchandise, but also of technology and services, according to Zhou Hanmin, vice chairman of the People’s Political Consultative Conference of the Shanghai Municipal Government, the city’s main political advisory body.

More than 2,800 foreign companies from 130 countries have leased booth space in a clover-shaped venue in Shanghai. More than 400 exhibitors will come from Japan, whose prime minister, Shinzo Abe, had an icebreaking summit with Xi last week. A total of 300 exhibitors from Germany and France will attend, along with 180 from the U.S. including big names such as Alphabet Inc.’s Google, Boeing Co., Caterpillar Inc. and Facebook Inc., according to the Ministry of Commerce.

Unlike other trade fairs held at the same venue, the government has been pushing for companies in Shanghai and around the country to participate in the CIIE, treating it as a “political task” that dovetails with Xi’s agenda to promote China as a responsible steward of the current global economic order.

To promote the expo, the organizers, the Ministry of Commerce and the Shanghai Municipal People’s Government have urged provincial delegations and state-owned companies to close sales deals and sign contracts at the fair. The government is also encouraging the public to pitch in. On neighborhood bulletin boards, one can see notices calling for every resident to help keep the city safe and clean during the event. The notices are reminiscent of the 2010 world expo in Shanghai, during which the government mobilized around 1.7 million students and mom-and-pop volunteers.

Some companies remain unsure about the benefits of attending the expo, or deliberating what to showcase on the venue. Others, particularly service companies, whose service will likely be in demand, see the event as opportunity to drum up new business at a national event.

Walter Tong, key accounts leader at consultancy Ernst & Young Greater China, said his firm wants to leverage the expo to both show support for China’s market and offer its tax, compliance and risk management services to smaller foreign importers in attendance. The fair’s organizers reported that the consultancy was the first foreign exhibitor to sign up.